A brave teenager has pulled a man to safety after he collapsed onto the Central Line tracks just seconds before a tube train arrived, then walked off saying ‘I can’t be late today.’

The incident was seen by hundreds of shocked commuters on the platform at Oxford Circus during rush hour this morning.

One witness, who did not want to be named, told MailOnline: ‘I helped the youngster back up onto the platform after he single-handedly heaved the victim up.

‘I wish I had asked his name afterwards. Everyone else was paralysed and considering the risk of getting on, including me. 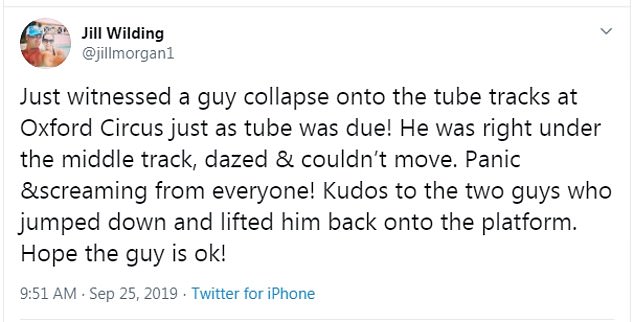 Another man, Steve Rose, said the incident was ‘horrifying to witness’ and is full of admiration

‘I have kids and didn’t dare risk my life. Victim convulsed not sure if bc if epileptic fit or voltage on track.

‘The rescuer was a teenager/early twenties in a grey hoodie and jeans. He coolly jumped on, hauled the man onto the platform but then couldn’t get up himself.

‘He had hurt his ankle a big when jumping on. He was so casual about it. Another man and myself then helped heave the youngster back up.

‘I told him he was amazing. He just said ‘I can’t be late today, I’ll get into trouble’ and walked off. Then we were all evacuated. I hope he is found and given recognition.

There are reports others joined in to help the stricken man.

On Twitter another witness said:  ‘Nothing but admiration for the man and others who climbed onto the platform to rescue the man who collapsed and fell onto the track in Oxford Circus station. It was horrifying to witness.’

Another person told the Mirror: ‘I was on the Central Line going west when I saw someone on the tracks and everyone started screaming.

‘Some brave guy jumped on the tracks and got them off.

‘People were just shouting to alert the trains and a guy jumped before the alarms had been set off.’

A British Transport Police spokesperson said: ‘We were called at 9.15 to reports of a person who fell onto the tracks.

‘A man has been removed but we have officers on the scene checking them, alongside the London Ambulance Service.’