By Gerard Couzens and Rita Sobot For Mailonline

This is the astonishing moment brazen drug runners landed their boat on a Spanish beach before unloading sacks of marijuana in front of a group of stunned British sunbathers.

A woman can be overheard saying in English, ‘Drug delivery daytime, what the heck’ as another in a bikini near to her sat up on her sun lounger to watch the extraordinary scene.

The boat and the men who carried the cannabis resin ashore had disappeared by the time police arrived and no arrests were made.

The broad daylight drugs drop happened at a beach by a residential area called Benamara between Marbella and Estepona.

The beach is close to a four-star hotel popular with Brits called the Hotel Sol Marbella Estepona-Atalaya Park.

The footage is understood to have been taken by tourists on sun loungers belonging to a beach eatery called Salduna Beach. 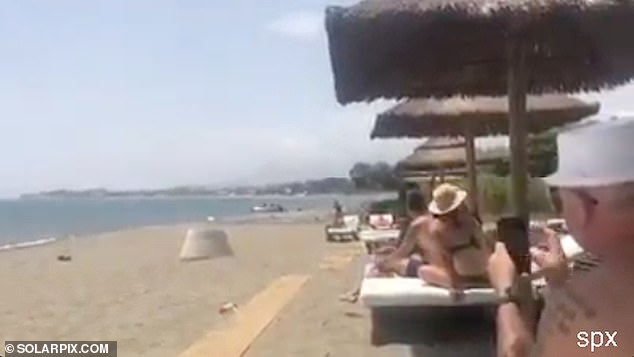 Pictured: The shocked tourists can be heard saying in English, ‘Drug delivery daytime, what the heck’, as the drugs are hauled on the Costa del Sol beach

One of the men who hauled the drugs ashore could be seen stumbling because he was carrying the last two bales of cannabis resin handed to him by the group in the boat.

A van is believed to have been waiting in a residential street at the back of the beach to speed off with the haul before police arrived.

Last September a gang of men were filmed transporting cannabis resin from a speedboat to a parked 4×4 on a beach in the same municipality of Estepona.

They threatened to kill witnesses if they alerted police and took less than three minutes to make the transfer and their getaway from the beach.

One sun-seeker in black swimming trunks and a white cap could be seen looking on from a few feet away as the incredible scene unfolded before his eyes. 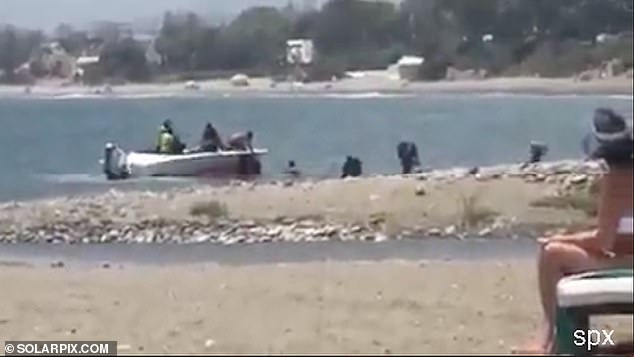 The men filmed running from the boat to the 4×4 and dumping the drugs into the back almost stumbled over two groups of sunbathers lying on towels on the sand as they sprinted between them with the bags of cannabis resin on their shoulders to reach the car.

One of the drugs traffickers could be heard shouting out in Spanish, in a chilling warning to one of the tourists the criminals ran past: ‘The mobile. If you call, I’ll kill you.’

The threat was made, and recorded by witnesses filming the drugs drop from a property overlooking the beach, at the start of the three-minute video.

One could be overheard claiming the drugs smugglers had been in the area since the early hours of the morning, monitoring the coastline to make sure there was no police presence.

Another said: ‘It’s amazing. There’s people sunbathing on the beach and no sign of police whatsoever.’

As the 4×4 pulled away with the cannabis resin on board, one of the witnesses added sarcastically: ‘That’s it, now to make money.’ 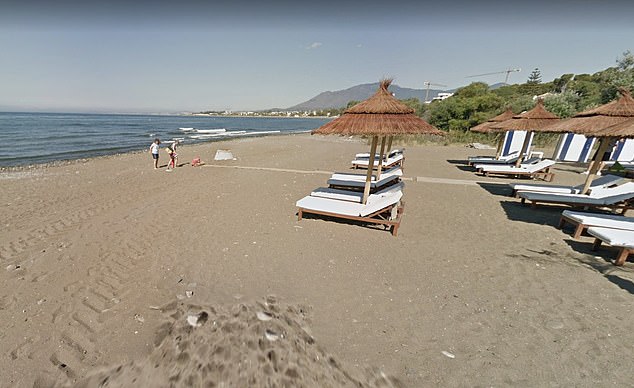 Pictured: The beach where the drug drop took place, which is by a residential area called Benamara between Marbella and Estepona

Police union representatives said at the time it showed more resources were needed to tackle the scourge of drugs trafficking.

Last July a group of men were filmed loading a speedboat used in the illegal drugs trade with fuel-filled jerry cans on Tubalitas beach in Manilva near Estepona.

Civil Guard union representative Jose Encinas told Spanish daily El Mundo at the time the boat filmed in the footage was a supply vessel used to refuel the speedboats that make the short crossing from Morocco to Spain with cannabis resin.

He said: ‘The key is being able to demonstrate that this type of vessel is carrying fuel to the narco-boats.

‘If that can be demonstrated, they would then be members of an organised gang, but that is something that requires investigation.

‘The reason these people act with total impunity is because there is not enough police resources to conduct a proper investigation.’

A beach in Manilva was also the scene of a chase last summer involving a police helicopter and a suspected drug smuggler.

Some of the tourists were filmed running for their lives, fearing the high-speed boat was going to crash on the beach and into the crowd.