Venezuela’s President Nicolas Maduro was filmed dancing to rap music during a deadly uprising aimed at removing him from power.

Protests have proliferated throughout the country since opposition leader Juan Guaido declared himself acting president on January 23, and tensions increased last week when Guaido called for an uprising by troops loyal to Maduro.

The attempted uprising set off two days of violent clashes between security forces and protesters that left five people dead, dozens injured and more than 233 arrested.

But last Thursday Maduro was seen dancing on stage to rap music in footage uploaded to his Twitter account where he declared he had shared an ‘extraordinary encounter’ with the young people of his country.

Nicolas Maduro, pictured left, was seen dancing to a live music act as his country faced a revolt

More than 2,000 people have been arrested in the country for political reasons since the beginning of the year, most of them detained during anti-government protests, an NGO has reported.

‘Between January 1 and the month of May 2019, 2,014 persons have been arrested, the majority of them protesters,’ said Alfredo Romero, head of Venezuela’s Foro Penal prisoners’ rights NGO.

More than 800 are still in detention, Romero told a press conference.

He said 339 people were arrested after the failed uprising and the demonstrations that followed on April 30 and May 1, adding that 82 were still in jail.

On Monday, Venezuela’s Attorney General Tarek William Saab had said the number of people arrested in the protests sparked by the failed uprising was 233.

Venezuela has suffered five years of recession that has seen more than 2.7 million people flee poverty and insecurity since 2015, according to United Nations figures. 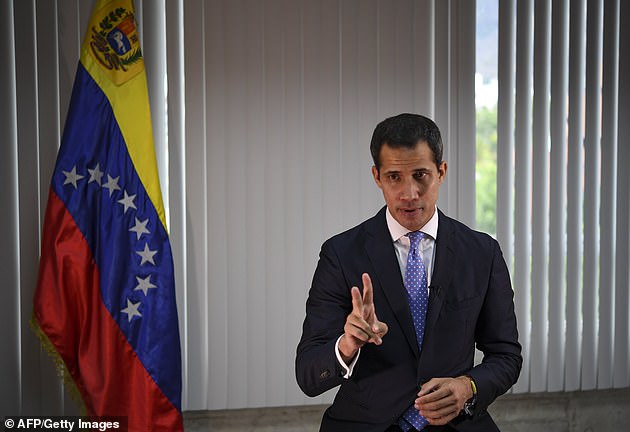 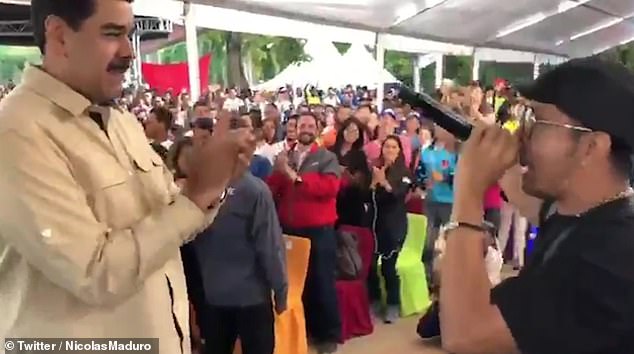 Venezuela has suffered five years of recession that has seen more than 2.7 million people flee poverty and insecurity since 2015, according to United Nations figures

Of the 30 million people left behind, the UN says almost a quarter are in desperate need of humanitarian aid.

The United States and some 50 countries recognise Guaido as the legitimate head of state – while China and Russia have backed Maduro.

Maduro – who has said Guaido is a puppet of Washington – has sought to show that the military remains on his side, but opposition leaders and US officials have said that support is tenuous.

Guaido has tried to keep up the pressure with massive street protests, but his latest call for demonstrations on Saturday drew only several hundred people.

He rejected suggestions that his opposition movement was flatlining, however.

‘On Saturday, I think the protest was fulfilled. A key goal for us was to redirect it toward non-violence,’ he said.