An emotional Neymar scored his 68th goal for Brazil in their 4-0 victory over Peru on Thursday in the Copa America, which sees him edge closer to the all-time record set by legend Pele.

He reduced the gap to nine after his side cruised to victory in Rio.

Official statistics from FIFA, soccer’s international governing body, put Pele in No. 1 spot for Brazil with 77 goals. Neymar has 68 after he netted the Selecao’s second against Peru.

‘It is obvious for me that this is a great honor, to be a part of Brazil history,’ a tearful Neymar said in an interview full of squeaky tones and long pauses after Brazil’s victory at the Nilton Santos stadium in Rio.

‘To be very honest, my dream was to play for Brazil, wear this shirt. I never imagined I would get to these numbers.

‘It is very emotional to me because I went through a lot of things over these last two years, difficult and complicated things. These numbers are nothing compared to the happiness I have playing for Brazil.’ 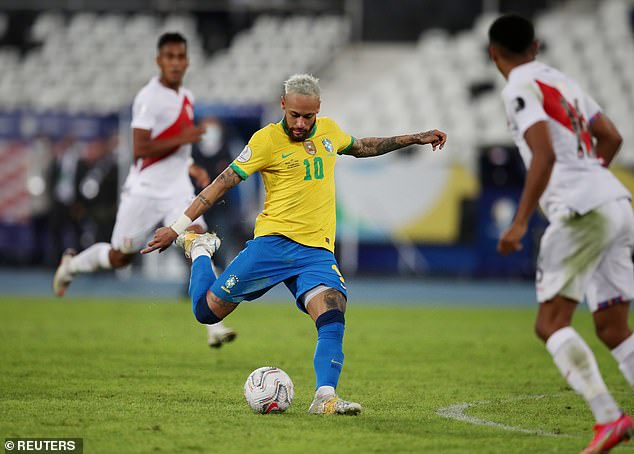 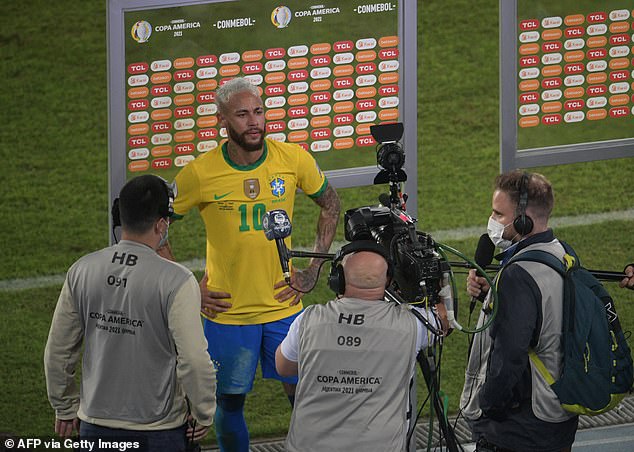 After the game, Neymar was left emotional as he homed in on Pele’s record of 77 goals

Neymar has had several injuries, lost a Champions League final with Paris Saint-Germain in 2020, and had to deal with a sexual assault allegation that was later proved false.

Pele, who has followed Neymar’s career since the younger man’s first appearances at Santos, published a picture of the pair on Instagram.

‘I, like all Brazilians, am always happy when I see him play ball. Today he gave another step toward my record of goals for the Selecao. And I am cheering for him to get there, with the same joy I have since I saw him play for the first time,’ 80-year-old Pele said.

Brazil coach Tite doesn’t want to the super star players, but he does say the 29-year-old Neymar is extraordinary.

‘He has a really personal thing, he developed his skills to give assists, his right foot, his left foot. He became unpredictable,’ Tite said after the 3-0 win against Venezuela last Sunday.

Tite is working on a system to give Neymar space closer to the goal and more protection.

‘That’s where the adversaries fear pressing him harder, they could give a foul in an important place,’ Tite said. ‘We structured our team so he can … (be) more efficient to create.’

Under FIFA’s criteria, Pele got his record after 92 matches, while Neymar has already played 107. 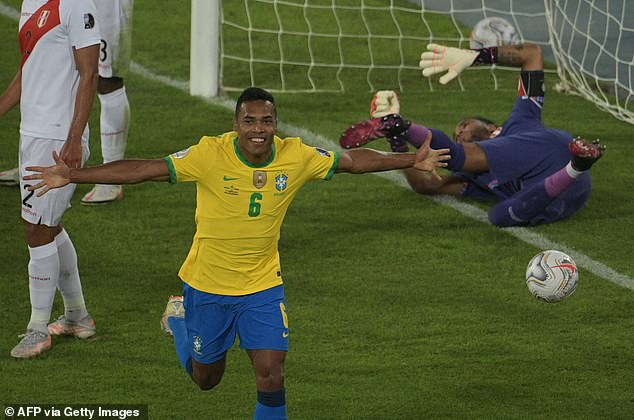 The Brazilian soccer confederation’s official scoring tally — which includes some non-international games against clubs and differs from the FIFA statistics — puts Neymar 28 goals behind the man who Brazilians call the king of soccer.

Brazil changed half of its starting lineup to face Peru on Thursday in their second Copa America match.

It was the Selecao’s ninth consecutive victory, and another display that suggests the tournament hosts are the favorites to defend their South American title.

The result puts Brazil top the Group B standings with six points. Colombia is two points behind after its 0-0 draw with Venezuela.

As coach Tite promised, Brazil is using the Copa America to prepare for next year’s World Cup in Qatar. Six players who missed the 3-0 win against Venezuela were in the starting lineup against Peru. 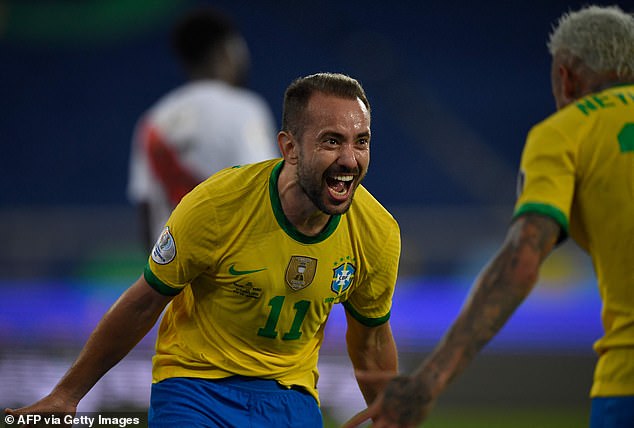 Brazil opened the scoring in the 12th minute after Gabriel Jesus crossed and Sandro hit it home from close range. But the new players didn’t adapt as well as the coach expected.

‘Our first half was not what we anticipated,’ Tite said. Everton Ribeiro and Richarlison stepped in, and Brazil appeared more assured in the second half.

In the 68th minute, Neymar received the ball at the edge of the Peruvian box and beat goalkeeper Pedro Gallese with a low crossed shot. 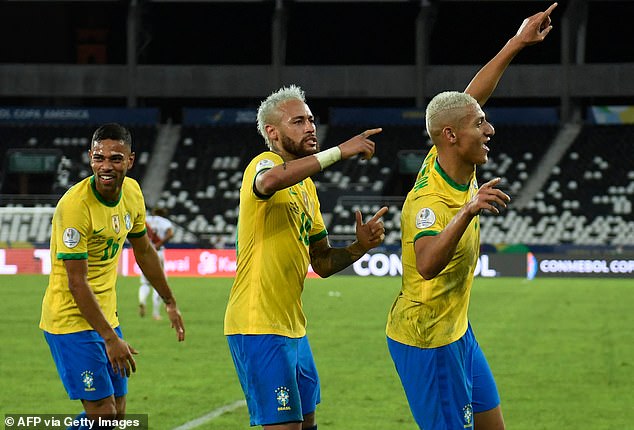 Peru stepped up the pressure, but Brazil moved further ahead in the 89th when Ribeiro scored from close range, his first for the national team. Richarlison, who went on at halftime, scored the last goal of the match in added time after two saves by Gallese.

Tite said his lineup had taken time to make the kind of adjustments that will eventually come naturally.

‘It takes a while. In the second half we used an excessive number of strikers, but that’s because we thought that is what the match required,’ he said.

Asked whether South American teams are offering Brazil a tough enough challenge, Tite said the the continental competition was good but he’d also like to play European teams.

‘We want Spain, Portugal, we want all those experiences,’ he said. ‘But the calendar doesn’t help.’