Licensed gun owners will not be permitted to carry their weapons in public in Brazil’s capital until after the inauguration of President-elect Luiz Inacio Lula da Silva.

The decision was handed down by the Supreme Court on Wednesday and comes after the foiled plot to attack Brasilia International Airport on Christmas Eve.

Justice Alexandre de Moraes issued the ruling which for the moment suspends licenses that allow registered residents to carry guns, firearms and ammunition in the Federal District, where the capital city of Brasilia is located.

The measure went into effect Wednesday evening and will be lifted January 2, a day after Lula’s inauguration.

Brazil’s Supreme Court ruled Wednesday that registered firearm owners in the capital city of Brasilia will not be allowed to carry guns and ammunition until after the inauguration of President-elect Luiz Inacio Lula da Silva. The measure went into effect Wednesday evening and will be lifted January 2, a day after Lula’s inauguration 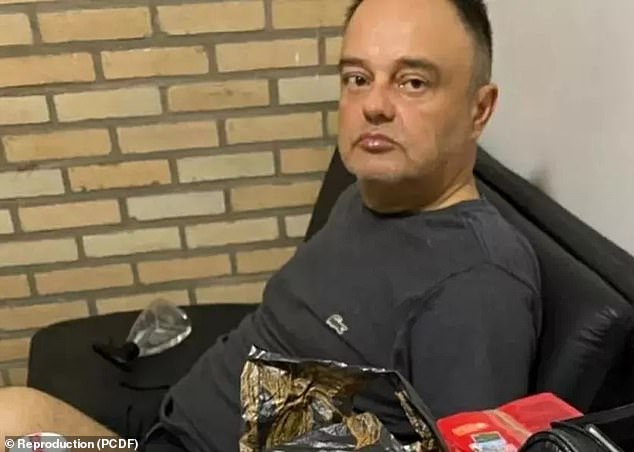 George de Oliveria opposed the results of President Jair Bolsonaro’s election loss and supported a plan to launch a series of attacks in Brasilia, Brazil. Authorities arrested him Saturday after discovering a bomb on a truck near Brasilia International Airport 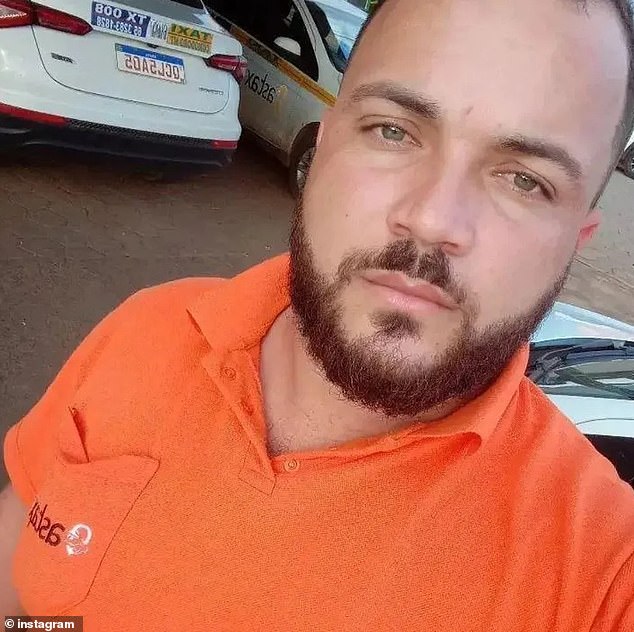 Brazilian police have launched a manhunt for Alan dos Santos (pictured), who allegedly built a bomb that was found on an oil tanker near Brasilia International Airport on Saturday as part of a plan to destabilize the country

The South American nation has struggled to prevent multiple acts of violence carried out by supporters of President Jair Bolsonaro following his runoff vote loss to Lula.

Loyalists of the far-right leader sought to cause widespread chaos over the Christmas holiday weekend by setting off a bomb that was found on an oil tanker truck near Brasilia International Airport on Saturday.

Businessman George de Oliveira, 54, was arrested Saturday evening and told police that he and the bombmaker, Alan dos Santos, who has not been arrested, acted in favor of President Bolsonaro. Five other suspects were also arrested.

Oliveira, who is facing illegal weapons possession and terrorism charges, said that he gathered with a group that opposed the election results on December 22 to carry out the attack.

‘I decided to draw up a plan with the demonstrators at the Army (headquarter) to provoke the intervention of the Armed Forces and the decree of a state of siege to prevent the establishment of communism in Brazil,’ de Oliveira told the Civil Police. 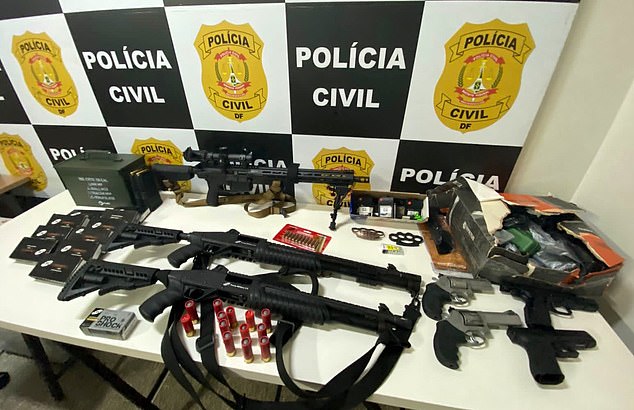 Police in Brasilia, Brazil, seized rifles, guns, explosives and ammunition from the home of George de Oliveira, who is facing terrorism charges as part of a plot to destabilize the Brazilian government ahead of President-elect Luiz Inacio Lula da Silva’s inauguration 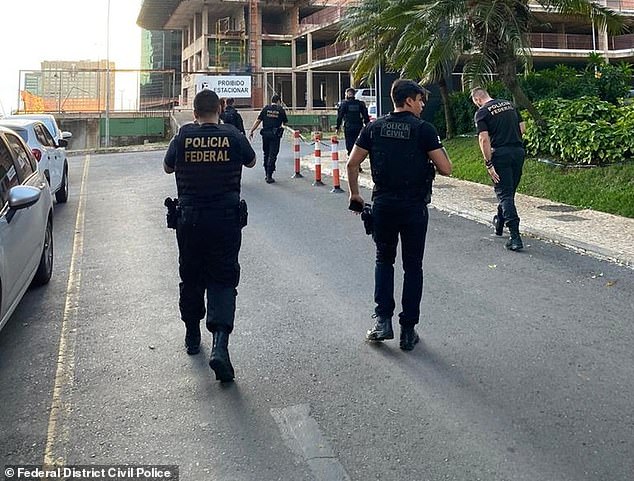 De Oliveira revealed the idea was brought up to bomb one of the parking lots at Brasilia International Airport followed by a phone call to announce that there were two explosives placed in the airport’s boarding area.

He said that that a woman who was part of the group suggested placing at bomb at an electricity substation to generate a commotion.

‘I went to the place pointed out by the woman in Taguatinga in a white Ford Ranger belonging to one of the protesters in the camp,’ de Oliveira told the police. ‘But the plan did not evolve because she did not show the car to take the bomb to the power transmission company.’

De Oliveira added that dos Santos stepped up to assume the responsibility of attaching the bomb at the power plant but changed his mind and headed to the airport instead.

‘I gave Alan the (bomb) and I insisted that he install it on a power pole to interrupt the electricity supply, because I did not agree with the idea of ​​​​exploding it in the airport parking lot,’ de Oliveira said. ‘However, on (Saturday) I learned on TV that the police had seized the bomb at the airport and that Alan had not followed the original plan.’

Bolsonaro supporters have been camping outside army barracks urging the military to stage a coup. The Brasilia camp, outside the army headquarters, has become one of the most extreme.

On December 12, the day Lula’s victory was certified, some of the camp dwellers attacked the federal police headquarters in Brasilia. 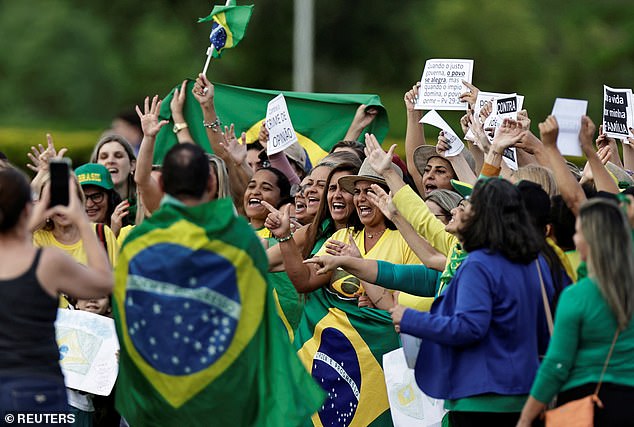 Supporters of Brazil’s President Jair Bolsonaro take part in a march in front of the Alvorada Palace in Brasilia, Brazil, on Tuesday 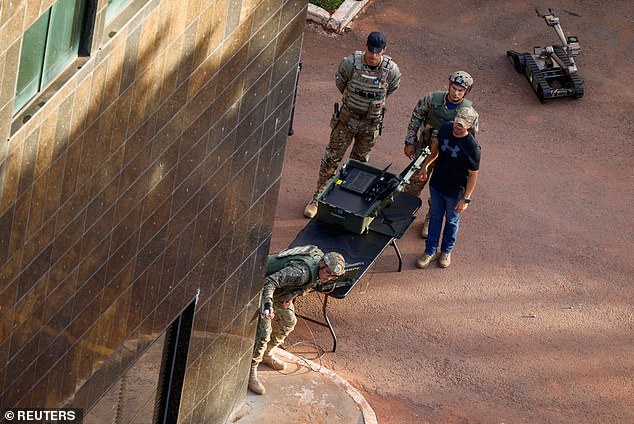 A joint operation between the Federal Police and Civil Police resulted in the arrests of four attack suspects in Rio de Janeiro, Rondônia and the Federal District on Thursday.

They were identified as Klio Hirano, Atilla Mello, Joel Pires and a fourth who has yet to be named. A fifth suspect, who also has not been named, escaped from a hotel during a police raid.

‘The ongoing police actions aim to guarantee the rule of law, in the fundamental dimension of protecting life and property,’ incoming Minister of Justice, Flávio Dino, wrote on his social media feed. ‘Political reasons do not legitimize arson, attacks on the Federal Police headquarters, depredations, bombs. Freedom of expression does not include terrorism.’