Brazil has become the second country to have surpassed the grim milestone of 100,000 deaths from coronavirus.

The nation of 210 million people has been reporting an average of more than 1,000 daily deaths from the pandemic since late May.

This brought the total number of cases to more than three-million and the death toll up to a staggering 100,477.

Brazil has become the second country to surpass 100,000 deaths from coronavirus after confirming more than three-million cases and 100,477 deaths. Pictured, a tribute for the victims is held on Copacabana beach in Rio de Janeiro 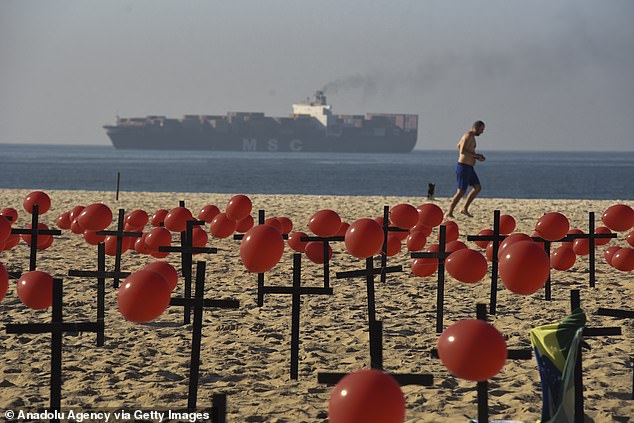 The only country to have recorded more deaths than Brazil so far is the US, who have reported a total of 162,441 deaths, according to official figures 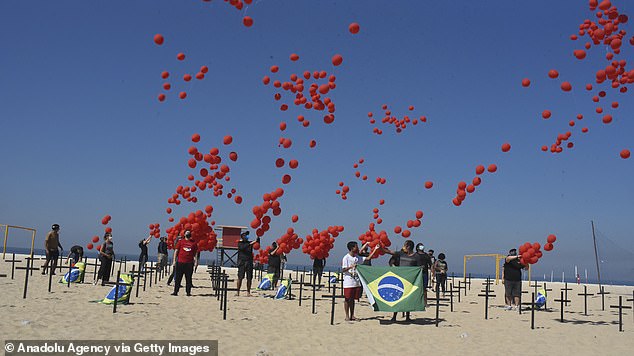 In a tribute to Covid-19 victims, the non-governmental group Rio de Paz placed crosses and a thousand red balloons on the sand on the famed Copacabana beach today

The only country to have recorded more deaths than Brazil so far is the US, who have reported 162,441 deaths.

Mexico follows behind Brazil with 52,006, compared with 46,651 recorded deaths in the UK, according to Johns Hopkins University figures.

During the first three months of the pandemic, 50,000 people died in Brazil, a figure that has since been matched in just 50 days, Sky News reported.

As in many countries, experts believe Brazil’s numbers are severely undercounted due to insufficient testing.

In a tribute to Covid-19 victims, the non-governmental group Rio de Paz placed crosses and a thousand red balloons on the sand on the famed Copacabana beach.

One poster read: ‘100 thousand: Why are we the second country in number of deaths?’

At the end of the tribute, members of the NGO released the balloons, which sailed into the sky.

On Thursday night, during a Facebook transmission President Jair Bolsonaro said: ‘I regret all the deaths, it’s already reaching the number 100,000, but we are going to find a way out of that.’

Bolsonaro has faced severe criticism for downplaying the virus and attacking social distancing measures adopted by state and local authorities. 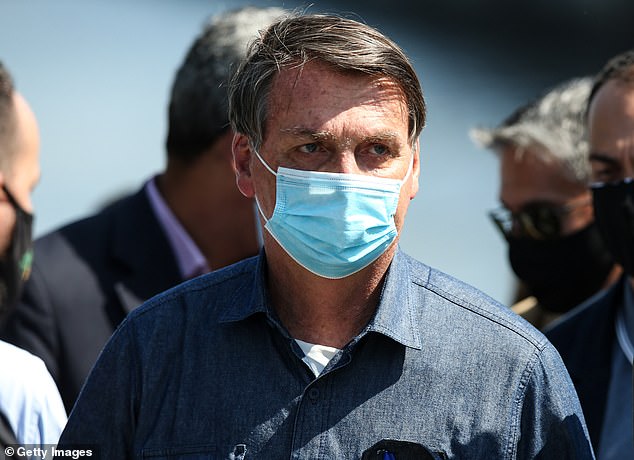 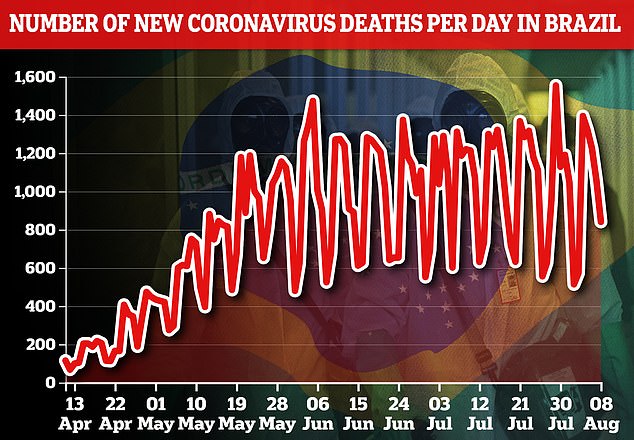 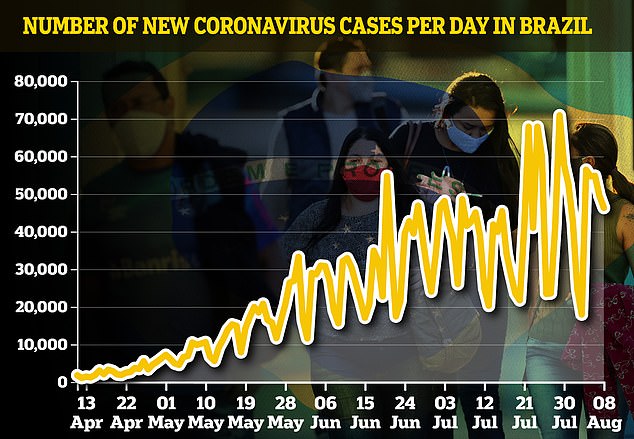 Dr Jose Davi Urbaez, a senior member of the Infectious Diseases Society, and other public health experts have claimed Brazil has no coordinated plan to fight the coronavirus pandemic.

Dr Jose Davi Urbaez said: ‘We should be living in despair, because this is a tragedy like a world war – but Brazil is under collective anesthesia.’

Brazil’s supreme court and congress, who criticised Bolsonaro’s handling of the pandemic, have respectively announced three and four days of national mourning for the deceased.

Alexandre Naime, head of Sao Paulo State University’s department of infectious diseases, said there is no sign as to when the death count in Brazil may subside.

‘Only time will show the full impact of COVID-19 here.’

Bolsonaro is on his third health minister since the pandemic reached Brazil five months ago, after falling out with two doctors who previously held the post over their recommendations on containing the virus.

The current interim minister is Eduardo Pazuello, a military general with no prior medical experience.

Pazuello abandoned the call for social distancing, which experts say is essential but the president has opposed.

Bolsonaro claims he recovered from coronavirus, which he announced he had been diagnosed with on July 7, due to hydroxychloroquine. 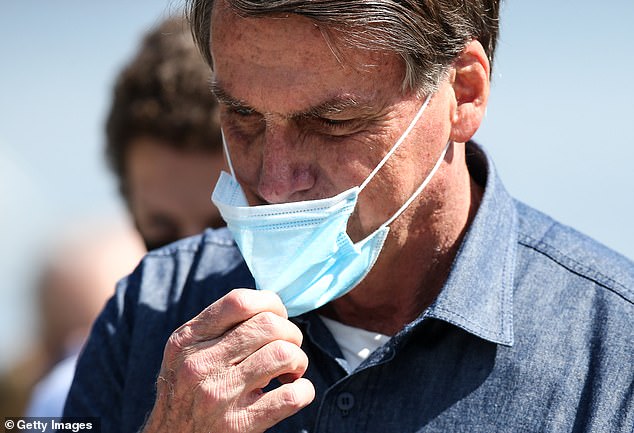 Bolsonaro has claimed the unproven malaria drug hydroxychloroquine aided his recovery from coronavirus, which he announced he was diagnosed with on July 7 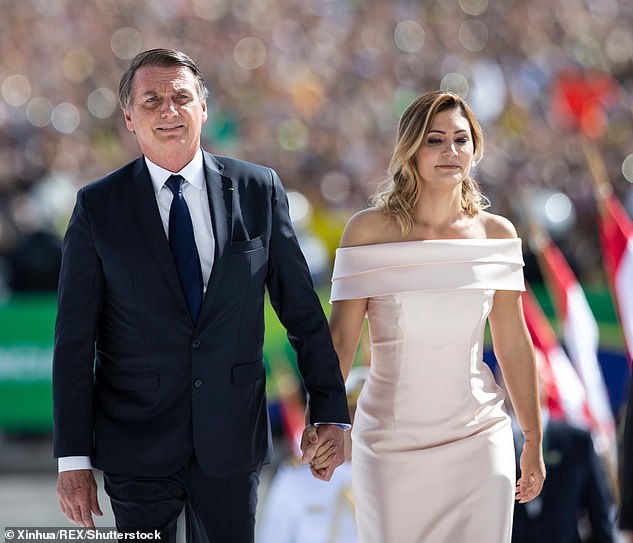 He has hailed the unproven malaria drug hydroxychloroquine as a remedy for Covid-19.

The drug is no longer used in emergency treatment for coronavirus in the US, with authorities citing reports of heart complication in saying its ‘unproven benefits ‘do not outweigh the known and potential risks’.

The 65-year-old was confined to the presidential palace in the capital, Brasilia, for more than two weeks, testing positive for coronavirus three times since falling ill.

The president announced he had tested negative for coronavirus on July 25.

But his wife Michelle Bolsonaro, 38, tested positive for the virus at the end of last month.

The presidency’s press office announced that she appeared to be in good health, but would be following established protocols.

It came just days after she attended an event recognising rural women workers. It was also her husband’s first public gathering since he tested negative for coronavirus.