Brazil records its biggest ever jump in coronavirus cases and 1,282 deaths in a day

Brazil reported a record 34,918 new coronavirus cases on Tuesday, the same day that one of the senior officials leading the country’s widely criticized response to the crisis said the outbreak was under control.

Brazil, the world’s No. 2 coronavirus hotspot after the United States, is fast approaching 1 million cases, although experts say the true number is likely higher due to patchy testing.

Walter Braga Netto, the head of the office of the president’s chief of staff, known as Casa Civil, and one of the top officials handling the crisis, said it was under control.

‘There is a crisis, we sympathize with bereaved families, but it is managed,’ said Braga Netto, who spoke during a webinar held by the Commercial Association of Rio de Janeiro.

A daughter hugs his mother at Geriatric Clinic on June 16, 2020 in Gravatai, Brazil. The clinic created the Tunel do Abraco (hug tunnel) for elderly residents to be able to hug relatives after more than 70 days apart due to the coronavirus pandemic 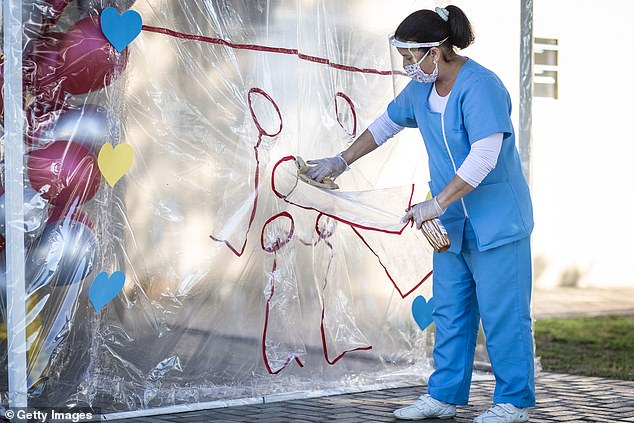 A nurse cleans the hug tunnel, which has holes and plastic sleeves to all people to hug relatives while being protected from the coronavirus behind the plastic screen

Braga Netto said Brazil’s deaths-per-million-people figure was better than that of Belgium, Spain, the United Kingdom, Italy and France. As such, the Army general said he ‘was trying to convey a message of optimism in the management of the crisis.’

His optimism was not shared by the World Health Organization’s regional director. 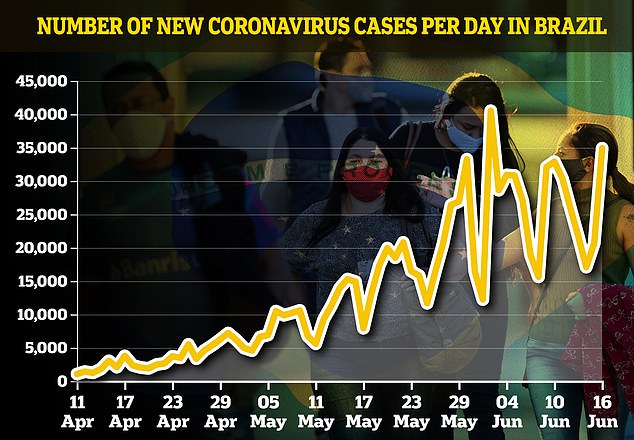 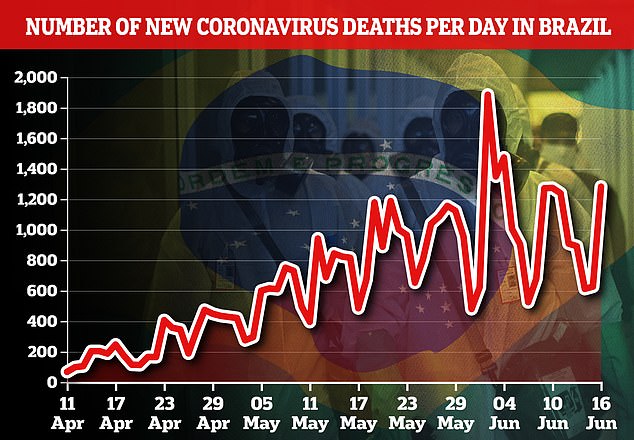 Latin America’s largest country accounts for about a quarter of the roughly 4 million coronavirus cases in the Americas and nearly 25% of the deaths, she said.

‘We are not seeing transmission slowing down’ in Brazil, Etienne said.

PAHO recommends that Brazil and other regional countries strengthen social distancing and urged that reopening of the economy be done slowly and carefully.

Brazilian President Jair Bolsonaro has long opposed social distancing measures, and many of the country’s states are re-opening for business even though the outbreak remains severe. 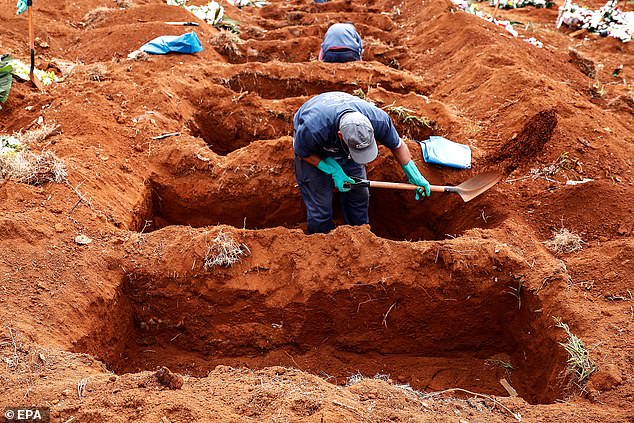 Pictured: Gravediggers of the Vila Formosa cemetery, the largest in Latin America, exhume old graves to open new spaces for those deceased by COVID-19, in Sao Paulo, Brazil, 15 June 2020 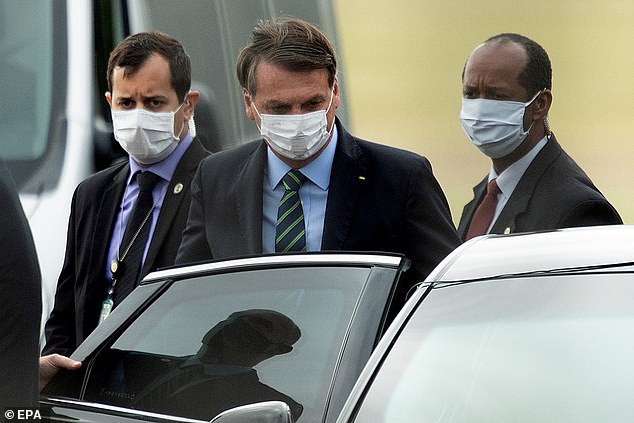 Some villagers in the eastern Amazon are spurning Brazilian government advice to take the malaria drug hydroxychloroquine to keep the novel coronavirus at bay and are drinking tea of jambú, also known as the toothache plant.

Maria de Nazaré Sajes, 65, tested positive for the coronavirus and believes she fought off the symptoms by drinking the infusion of bitter leaves.

‘I made jambú tea and felt healthy again. People said: “Look at Maria, how she has recovered, she no fever or pains”,’ Maria said while she was boiling water on a gas stove in her wooden house.

Her village on the banks of a tributary of the Amazon was visited by public health workers to test inhabitants for the virus that is ravaging Brazil in the world’s second worst outbreak after the United States.

U.S. regulators withdrew approval this week for the emergency use of hydroxychloroquine to treat patients with COVID-19, the disease caused by the new coronavirus. It is still being prescribed in Brazil as scientists around the world are working to develop a vaccine and effective treatments. 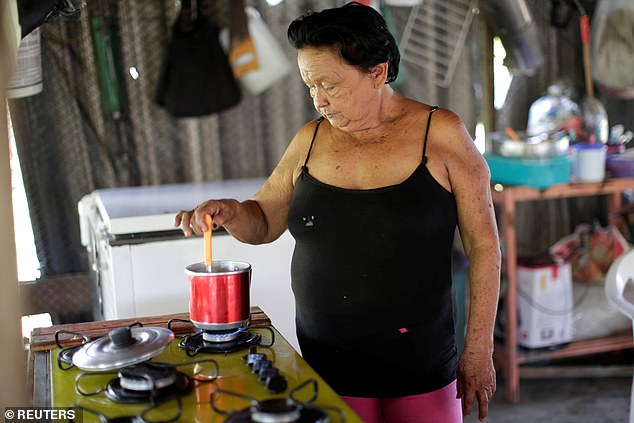 Pictured: Maria de Nazare prepares a tea using a leaf from the Jambu, a typical herb from northern Brazil, in her home near of Portel, southwest of Marajo island in Para state, Brazil, June 13, 2020 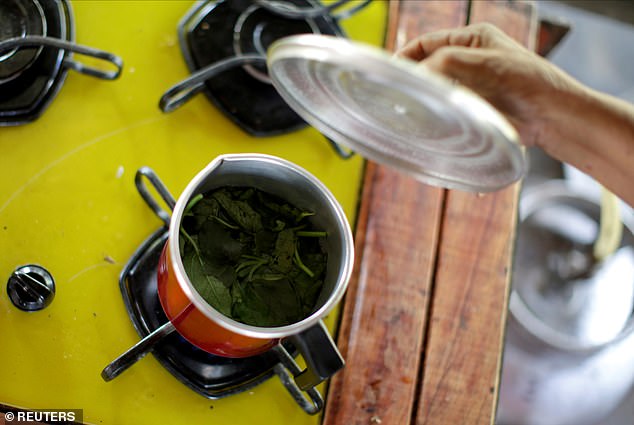 Maria de Nazaré Sajes, 65, tested positive for the coronavirus and believes she fought off the symptoms by drinking the infusion of bitter leaves 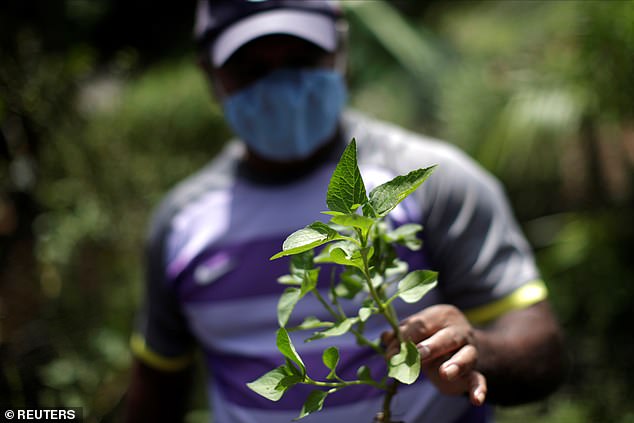 Jambú leaves (pictured) are used in local dishes, but said to work as an anesthetic that helps relieve pain, besides other properties fighting viruses and use as a laxative or aphrodisiac

In remote corners of the Amazon rainforest, where access to intensive care wards can require long boat rides to the nearest cities, prevention is paramount, and people there place their faith in traditional herbal medicines.

Nurse Marilia Costa says there is resistance to taking hydroxychloroquine.

‘We are seeing that most inhabitants here are taking home-made remedies that they believe have great curing qualities,’ she said. ‘They accept pills for fever, but they take it with their own local medicine.’

Jambú leaves are used in local dishes, but said to work as an anesthetic that helps relieve pain, besides other properties fighting viruses and use as a laxative or aphrodisiac.

‘I’m afraid to go to hospital because there would be no natural medicine that we find here,’ said a young woman called Maria Claudia. ‘They wouldn’t allow me to have jambú tea there.’ (Reporting by Leonardo Benassatto; Writing by Anthony Boadle; editing by Grant McCool) 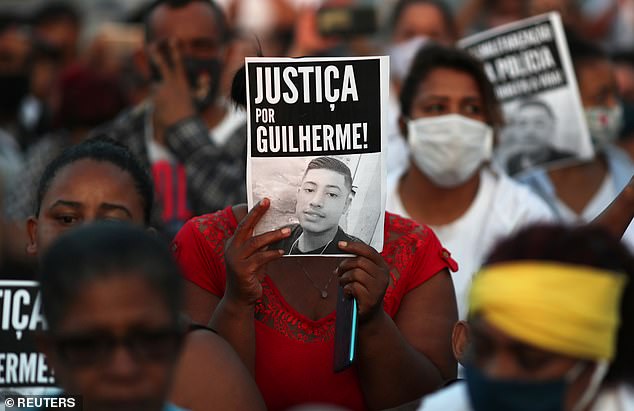 People take part in a protest against the death of teenager Guilherme Silva Guedes, 15 – on June 16, 2020 – who disappeared in Vila Clara, in Sao Paulo, Brazil on Sunday 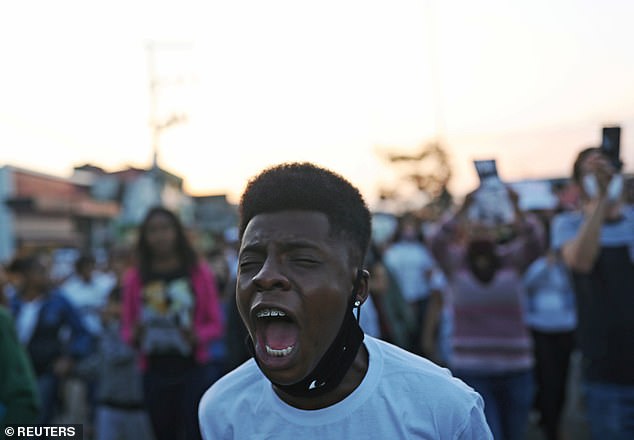 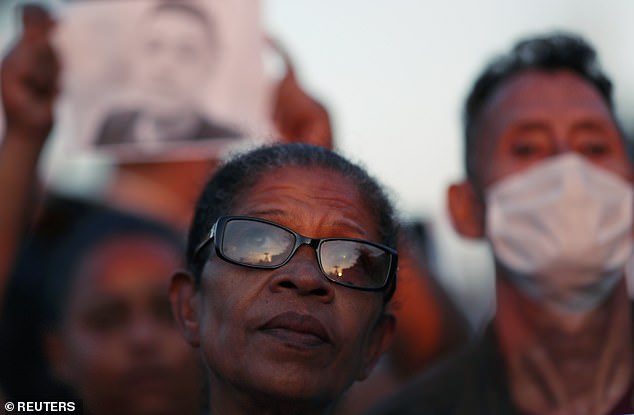 Meanwhile, protests against police brutality have broken our after the body of a 15-year-old boy was found.

Guilherme Silva Guedes went missing on June 14, and Residents of Sao Paulo took to the streets on Tuesday after his body was later found with two gunshots to the head and signs of aggression on his body.

His grandmother was among those marching.

‘They took my grandson,’ she said. ‘I just went to see my grandson at the cemetery, with two gunshots to the head, a gunshot in the hand. He was injured, they hit my grandson a lot. He didn’t deserve what they did. He was a very good person.’ 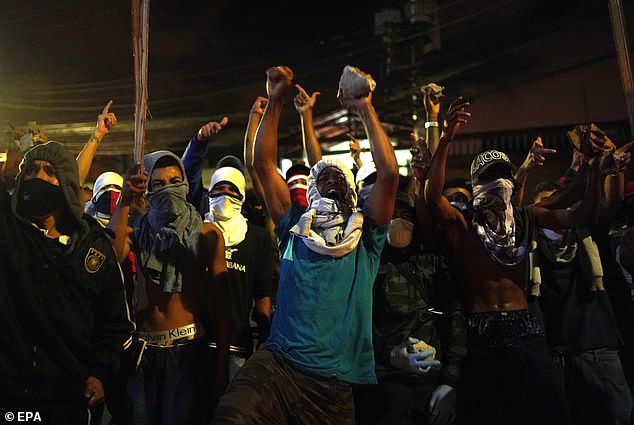 People protest for the second consecutive day after police reportedly shot and killed a 15-year-old boy, in the outskirts of Sao Paulo, Brazil on Sunday. Pictured 16 June 2020 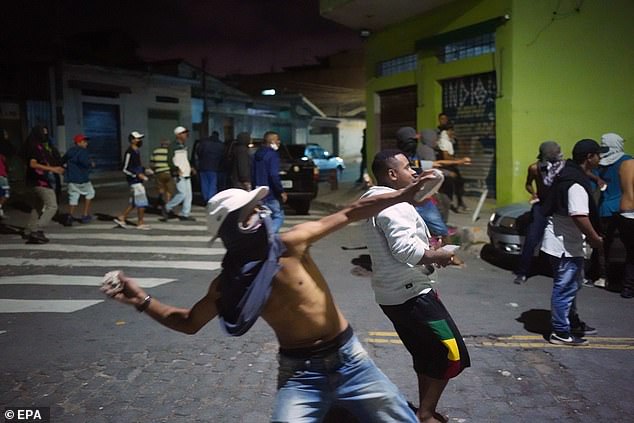 People have taken to the streets and were seeing throwing rocks and other projectiles at police, who are believed to have killed 15-year-old Guilherme Silva Guedes on Sunday 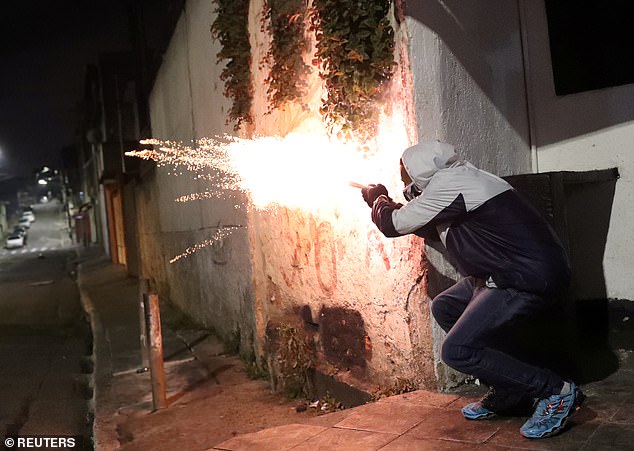 According to Human Rights Watch, police killings are commonplace in Brazil and three-quarters of the nearly 9,000 people killed by Rio police in the past decade were black men. Pictured: A man fires a firework down the street in the protests

On Tuesday, Sao Paulo’s Civil Police confirmed two officers from the military police have been named as suspects.

Tuesday’s protests were peaceful after protesters burned buses on Monday.

According to Human Rights Watch, police killings are commonplace in Brazil and three-quarters of the nearly 9,000 people killed by Rio police in the past decade were black men.