Brazilian authorities are searching for a man suspected of making one of the bombs planted as part of a plot to destabilize the country ahead of President-elect Luiz Inacio Lula da Silva’s inauguration on New Year’s Day.

The explosive was attached to an oil tanker that was set to explode near a road at Brasilia International Airport on Saturday as part of a large-scale attack by supporters of outgoing President Jair Bolsonaro.

The alleged bombmaker, Alan dos Santos, may no longer be in Brasilia, the capital of Brazil, Federal District Civil Police said Tuesday.

The 32-year-old reportedly assisted businessman George de Oliveira, 54, in setting up the bomb on Christmas Eve.

Brazilian police have launched a manhunt for Alan dos Santos (pictured), who allegedly built a bomb that was found on an oil tanker near Brasilia International Airport on Saturday as part of a plan to destabilize the country 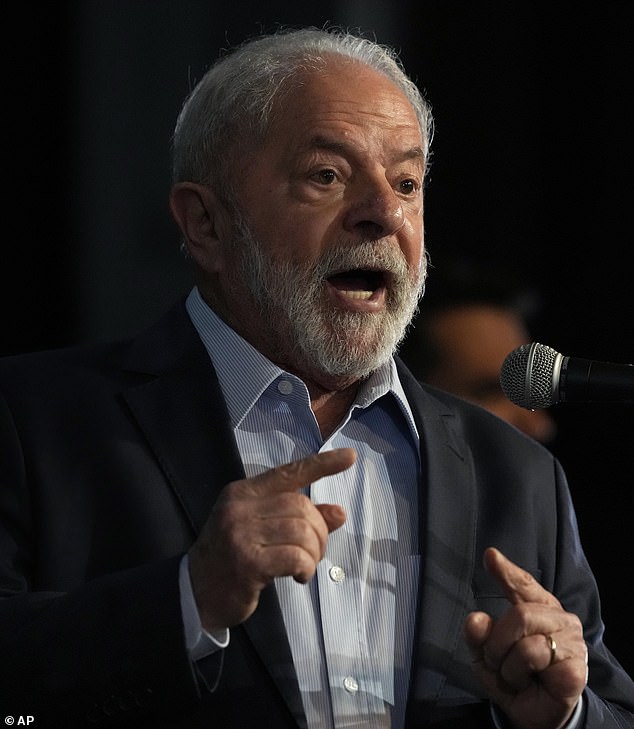 Brazilian President-elect Luiz Inacio Lula da Silva is set to be inaugurated as the South American nation’s next president January 1, 2023

The truck driver noticed a strange object attached to the vehicle and immediately alerted the Military Police.

Federal District Civil Police chief Robson Candido told reporters that the bomb had been activated, but failed to go off. The device was removed and safely detonated.

‘They tried to activate the equipment, but I don’t know why, maybe because of their technical inefficiency, they were unable to explode (it),’ Candido said. ‘But their intention was to explode these other materials and again cause, as I said, cause turmoil, right?’

Police said Tuesday that a backpack found near where Lula da Silva was staying that had prompted a bomb scare contained only personal belongings.

De Oliveira was arrested Saturday evening at his home. At least five other people linked to the failed bombing have also been arrested. 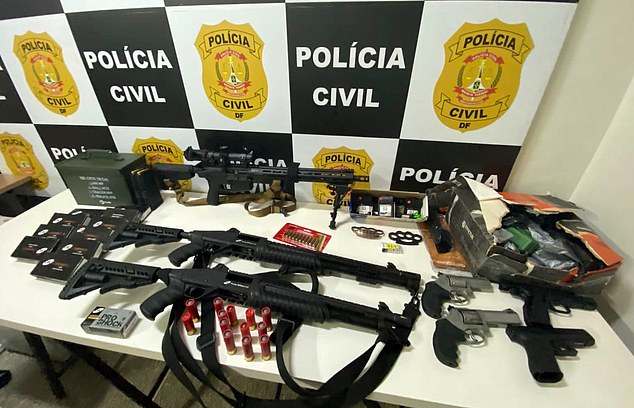 Police in Brasilia, Brazil, seized rifles, guns, explosives and ammunition from the home of George de Oliveira, who is facing terrorism charges as part of a plot to destabilize the Brazilian government ahead of President-elect Luiz Inacio Lula da Silva’s inauguration

De Oliveira told investigators that he and dos Santos acted in favor of President Bolsonaro, who lost his bid for a second term in a runoff vote October 30.

He has been charged with terrorism and is being held in pre-trial detention at Papuda Penitentiary Complex, a maximum security prison in Jardim Botânico, Federal District.

Authorities also charged him with illegal possession of firearms after a search of his home turned up a cache of bombs, rifles, shotguns, guns and ammunition.

De Oliveria told investigators that he had met with a group last Thursday and the idea was brought up to bomb one of the parking lots at Brasilia International Airport followed by a phone call to announce that there were two explosives placed in the airport’s boarding area.

‘I decided to draw up a plan with the demonstrators at the Army (headquarter) to provoke the intervention of the Armed Forces and the decree of a state of siege to prevent the establishment of communism in Brazil,’ de Oliveria told the Civil Police.

He said that that a woman who was part of the group protesting President Bolsonaro’s election defeat suggested placing at bomb at an electricity substation would generate a commotion.

‘I went to the place pointed out by the woman in Taguatinga in a white Ford Ranger belonging to one of the protesters in the camp,’ de Oliveira told the police. ‘But the plan did not evolve because she did not show the car to take the bomb to the power transmission company.’ 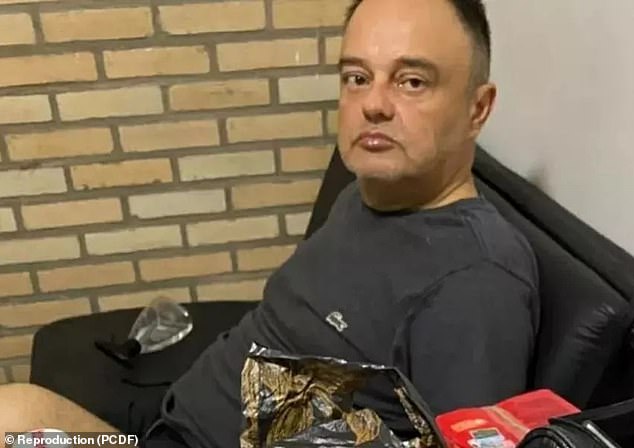 George de Oliveria opposed the results of President Jair Bolsonaro and supported a plan to launch a series of attacks in Brasilia, Brazil. Authorities arrested him Saturday after discovering a bomb on a truck near Brasilia International Airport 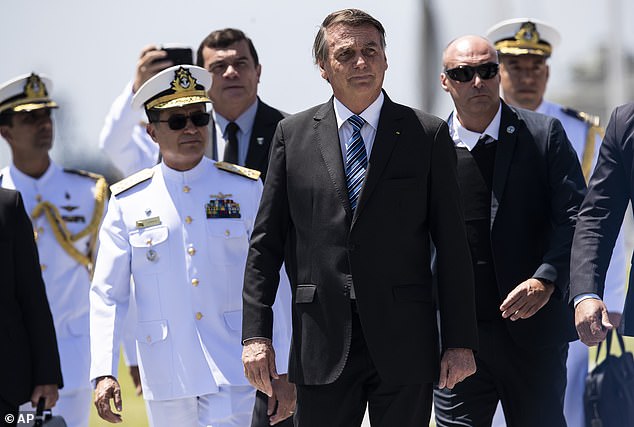 De Oliveria added that dos Santos stepped up to assume the responsibility of attaching the bomb at the power plant, but changed his mind and headed to the airport instead.

‘I gave Alan the (bomb) and I insisted that he install it on a power pole to interrupt the electricity supply, because I did not agree with the idea of ​​​​exploding it in the airport parking lot,’ de Oliveira said. ‘However, on (Saturday) I learned on TV that the police had seized the bomb at the airport and that Alan had not followed the original plan.’

According to Revista Forum, dos Santos ran for a city council seat in Comodoro, Mato Grosso, in 2016 but was not elected.

On Tuesday, the Social Democratic Party issued a statement indicating dos Santos had been kicked out of the political group.

‘The facts attributed to him, as reported by the press, are serious and unacceptable, they constitute crimes and need to be punished with the rigor of the law,’ the Social Democratic Party said. ‘Anti-democratic manifestations need to be rejected.’ 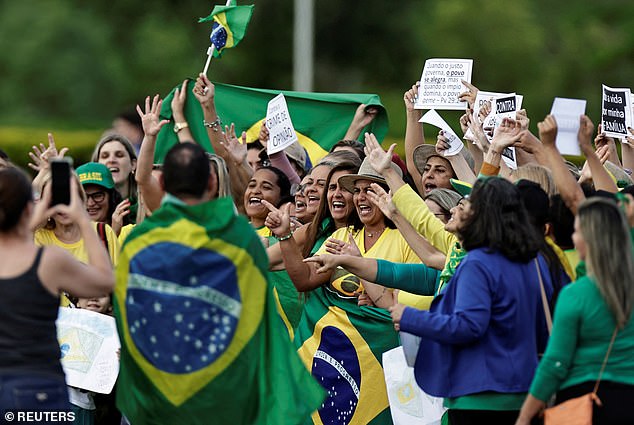 Supporters of Brazil’s President Jair Bolsonaro take part in a march in front of the Alvorada Palace in Brasilia, Brazil, on Tuesday

According to dos Santos’ Facebook page, the purported bombmaker had been employed by agricultural firm, Grupo Bom Futuro since July 21. His profile indicates he has been married since June 2016.

An Instagram post dated September 22 shows him wearing a uniform assigned to drivers by Astax, a rideshare app.

Silvan Messiaro, who also drives for the app, told the outlet that dos Santos had worked for one year and that ‘he’s a good guy.’

Incoming Justice Minister Flavio Dino said earlier this week that tensions in the capital have prompted President-elect Lula’s team to beef up security protocols for Sunday’s inauguration, which President Bolsonaro will not be attending. 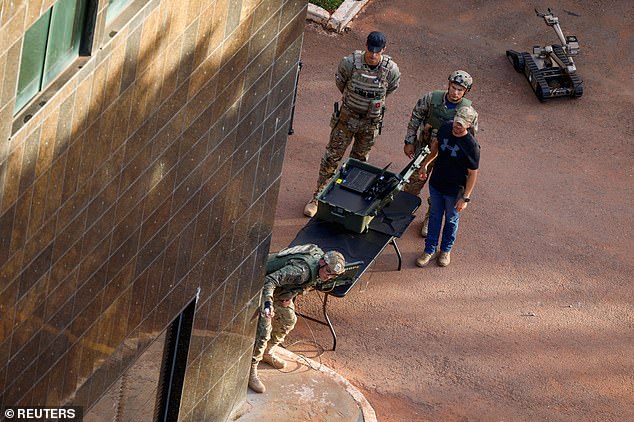 On Tuesday, Dino said the transition team will ask the Supreme Court to suspend the carrying of firearms in Brasilia for the next few days.

Since Bolsonaro began loosening gun laws in 2019, the number of registered gun-owners has surged sixfold to around 700,000 people.

‘We will ask Justice Alexandre de Moraes… to suspend the carrying of firearms in the Federal District between tomorrow (Wednesday) and Jan. 2 or 3,’ Dino told journalists.

‘The goal is that even people who have permits… have this suspension by court order, so that any carrying (of firearms) in this period will be considered a crime.’