Brazil’s federal government issued a decree to put the military in charge of Rio de Janeiro’s local police amid a marked rise in levels of gang violence.

A decree signed on Friday by President Michel Temer empowers the military with full control of security operations in Rio state, which the president said had virtually been seized by organised crime gangs.

Army patrols are already used in Rio’s favelas ruled by drug gangs but under the terms of the decree the army will have primacy over the state police. 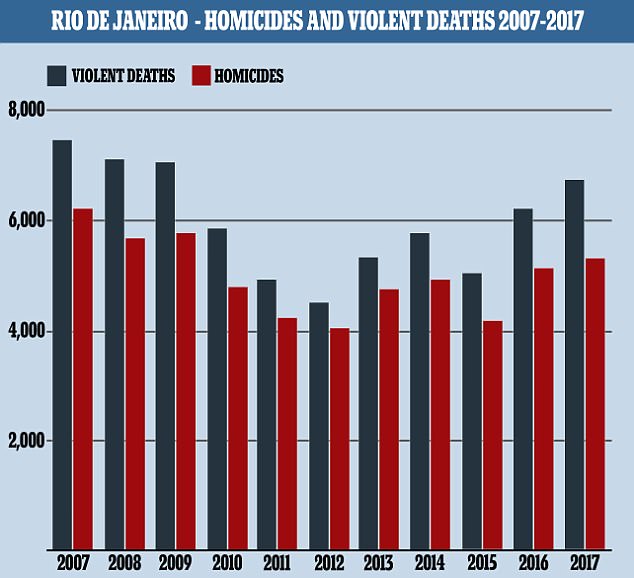 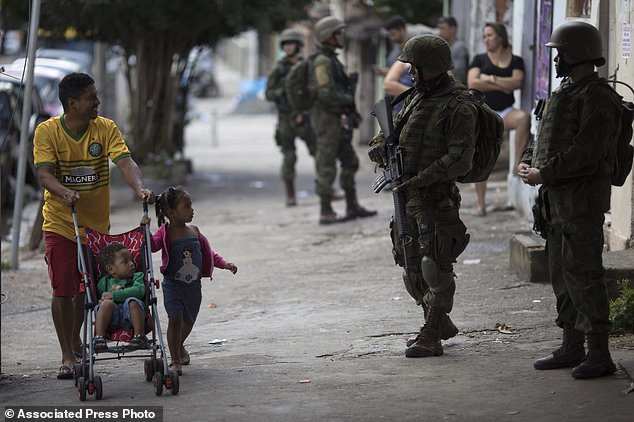 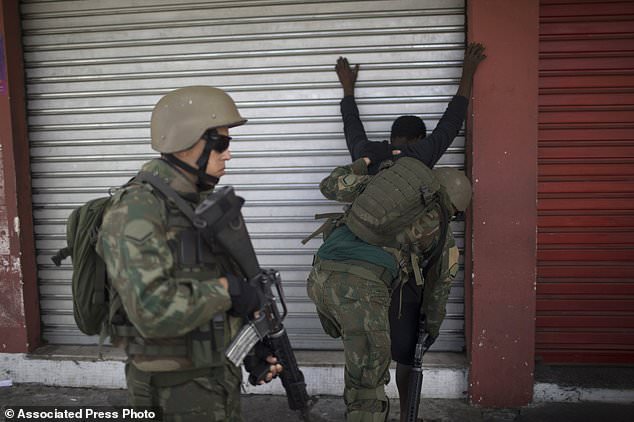 It is a move that is unprecedented since the country’s return to democracy in 1985 after 21 years of military rule.

‘I am taking these extreme measures because circumstances demand it,’ Temer said after signing the decree.

‘The government will give tough and firm answers, taking all necessary measures to eradicate organised crime.’

The country has seen a wave of violence that prompted Defense Minister Raul Jungmann to declare last month that ‘the security system is broken’.

‘Our prisons will no longer be offices for thieves, our public squares party halls for organized crime,’ Temer said after signing the decree. ‘I know it’s an extreme measure but many times Brazil requires extreme measures to put things in order.’

Violence and crime have been soaring in Rio following a deep recession that has left the state lacking funds to invest in its police and to pay salaries.

Public opinion surveys show the issue of security to be among Brazilians’ main concerns ahead of the October presidential elections.

The army deployment is significant, both symbolically and in practical terms, for Latin America’s largest nation, commentators say, especially when many still remember the brutal 1964-1985 military dictatorship.

Putting the military in charge could bring immediate relief from drug trafficking violence, but also spur fears among Rio’s residents about the use of strong-armed tactics.

The decree needs to be confirmed by Congress but is expected to become law without lengthy delays. Chamber of Deputies Speaker Rodrigo Maia told journalists in Brasilia that it would be voted on next week. 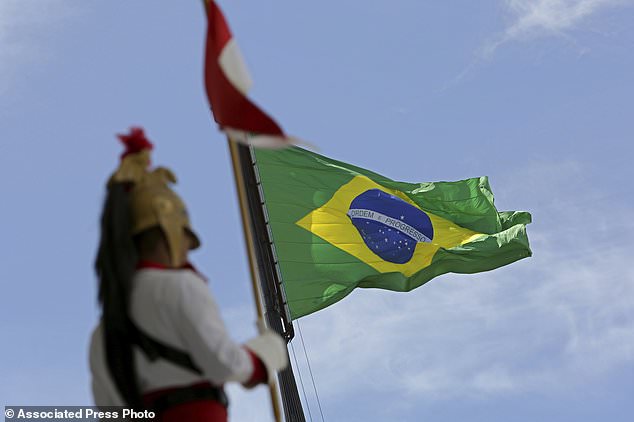 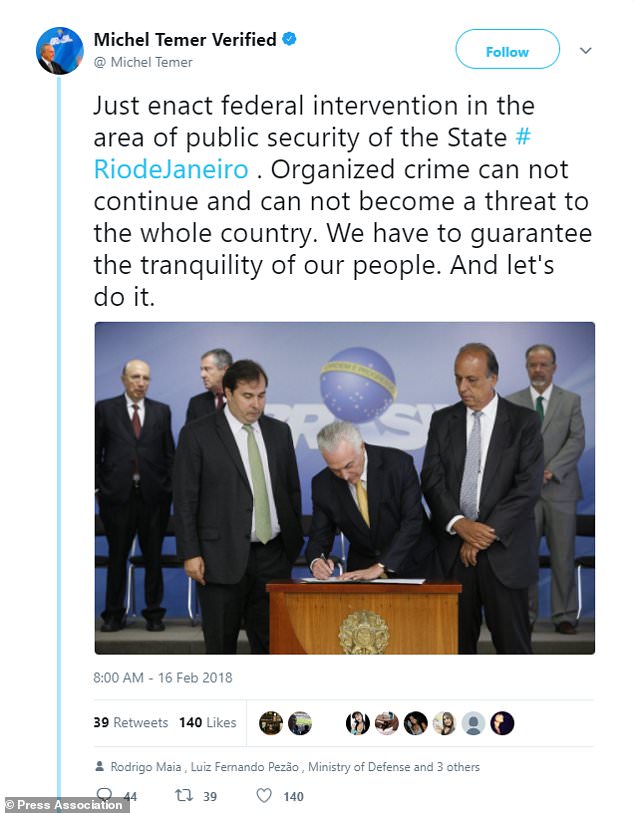 President Temer announced the deployment of the military in a tweet 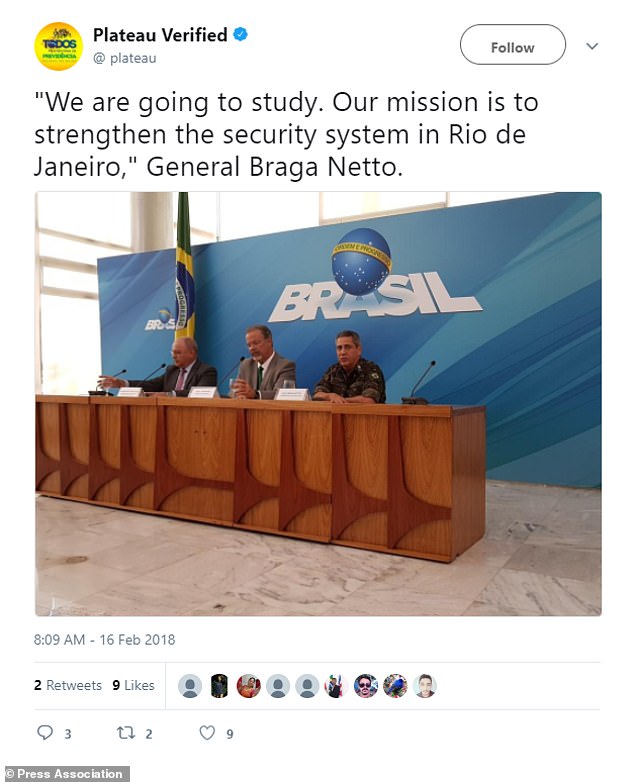 The move is a ‘triple jump without a safety net,’ said Maia. ‘We can’t get this wrong. This is an exceptional measure that hopefully won’t take too long to re-establish order.’

It is also a risky move for President Michel Temer, whose popularity has fallen to single digits as his push to pass pension reforms runs into trouble.

Many see his security announcement as a way for him to deflect attention from his political woes.

But few argue that Rio does not have a major problem when it comes to enforcing law and order – Governor Luiz Fernando Pezao admitted recently failings in this area – for both residents and tourists – were clear to see during Carnival celebrations, which ended Tuesday.

‘We were not ready,’ he said. ‘There were mistakes in the first days and we reinforced the patrols.’ Soldiers take part in a surprise operation in the Jacarezinho slum in Rio de Janeiro last month. The operation took place three weeks ahead of Carnival, which was blighted by gang violence as thousands of tourists arrived in the city 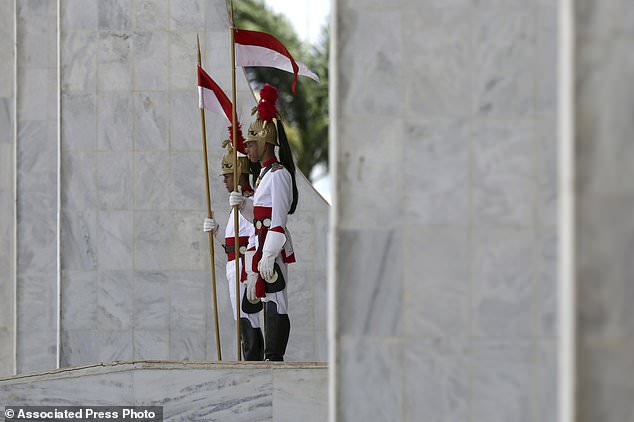 Brazil’s federal government is seeking to put the country’s military in charge of Rio de Janeiro’s local police. Chamber of Deputies Speaker Rodrigo Maia told journalists in Brasilia on Friday that a measure regarding federal intervention would be taken up by Congress next week 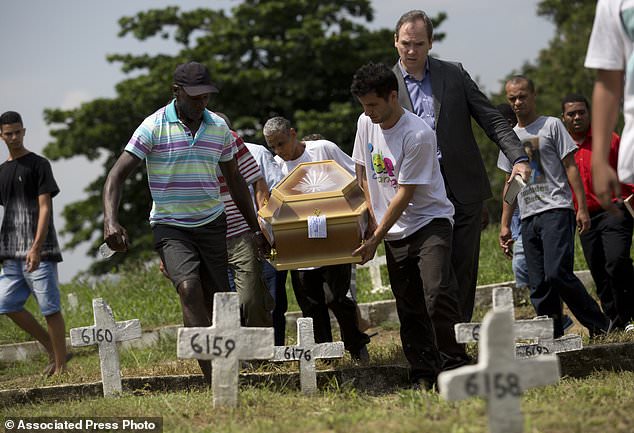 Relatives carry the coffin that contains the remains of Jeremias Moraes da Silva, 13, at a cemetery in Rio de Janeiro last week – he was walking home after playing soccer when he was struck by a stray bullet during a police operation in the Mare slum 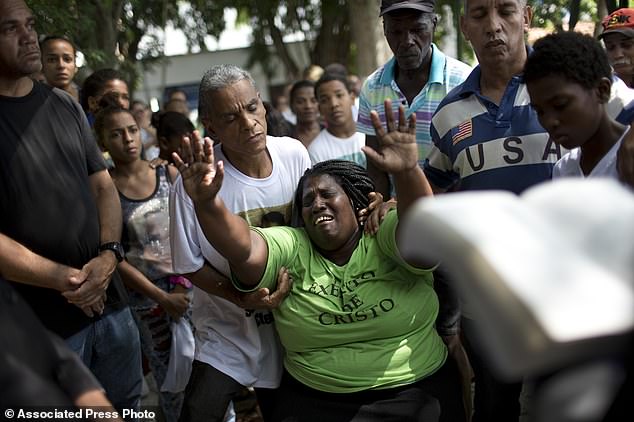 Temer is expected to speak to the nation later Friday.

Security consultant Paulo Storani, a former commander of Rio’s elite police force known as the BOPE, told the Associated Press that Temer’s move  ‘will bring a lot of challenges to the military’ because Brazil’s security problems are so deep rooted.

‘Rio’s problem is more complex than police management. There could be a quick sensation of security, but that will not last,’ he said.

‘Rio state can’t solve this anytime soon and the military could be effective in keeping some smaller groups that have operated lately off of the streets,’ da Silva said.

Press reports said the army’s mission will last until 31 December, the end of Temer’s term as President.

Rio state has been badly hit by Brazil’s recession and the slump in the oil market in the last few years, as well as massive corruption.