Break for the Brecon Beacons and discover Wales

You’ll need a 4 x 4 to reach the cottage, said the people at Sugar & Loaf. Pah, we thought. Taffeta (my wife) and I assumed the offer was a gimmick to make us townies feel we were on a real rural adventure. Wrong.

Our F-reg Citroen got stuck on the track in the second of five steep fields. We tried gunning the engine, burning the tyres, but the old girl wasn’t up to it. We tried shouting at each other. That didn’t work, either.

After a painful half-an-hour, we accepted defeat and reversed back past disappointed-looking sheep and cows.

‘You’re not the first!’ said Ady, the cottage owner. He told us to come to the Pandy Inn car park, five miles back down the road, to pick up a Land Rover Defender.

Our children (Ferdy, Gus and Clemmie, aged six, four and two) instantly fell in love with the Land Rover — or ‘tank’, as they called it. We marvelled at how easily it roared up the slope.

By the time we reached our destination — around a three-hour drive from London — and looked down at the valley stretching out beneath us in the sun, we instantly felt pleased with ourselves.

Sugar & Loaf specialises in luxury cottages in the most magnificent parts of Wales. Points Cottage in Abergavenny, where we stayed for three nights, is a beauty, bang on the border with England.

In 2001, its reconstruction was the subject of a Grand Designs episode, and it made for a sweet story. Ady, a quarrier by trade, and his wife (then girlfriend) Carina, a nurse, decided to turn a 300-year-old ruin, set three-quarters of the way up a mountain in the Brecon Beacons National Park, into their first home.

It was an ambitious project, the building work repeatedly set back by the elements — but, 16 years later, the effort has paid off. I can’t imagine a better place to spend a few days in the country. Admittedly, we were lucky with the weather. 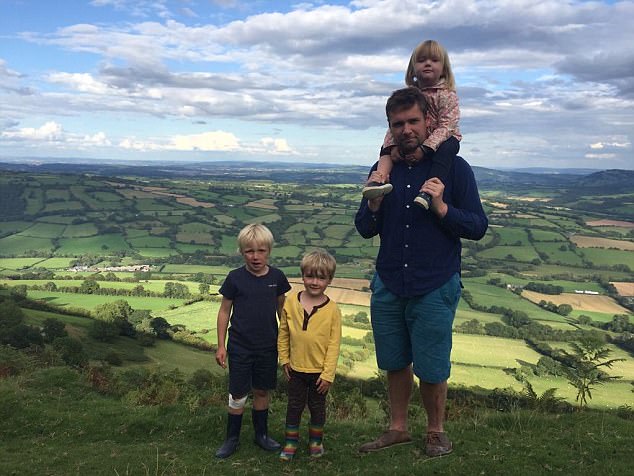 Holiday: Freddy and his three children – Ferdy, Gus and Clemmie

The cottage is cosy and exquisitely furnished and the surrounding countryside is fantastic — as dramatic as anything in Yorkshire; as dreamy as the best parts of Somerset. We even had chickens laying eggs for us in the garden. On our first afternoon, we drove about 20 minutes south to Llanthony Priory, a 12th-century Augustinian abbey. The children whined about having to go to church, of course.

‘This one doesn’t even have a roof,’ complained Ferdy. But they soon cheered up, and it was moving to walk with them through the ruins, thinking of those long-dead monks.

The next day, we went to Hay-on-Wye. The town has become a little too conscious of its literary reputation. It is now a place of twee cafes and expensive bookshops.

We ate good pies in the Kilverts Inn, and I used the wi-fi to look up how much cheaper the books would have been on Amazon, which gave me perverse satisfaction.

The trouble with countryside holidays is that you tend to worry about things to do. We had no such concerns. Our children had fun everywhere we went and loved hopping back into the ‘tank’ to return to the cottage and chickens.

On our last day, we hired a rowing boat on Llangorse Lake, which was especially rewarding when a ballet of swans surrounded us and started honking menacingly.

However, the best moment of the trip was walking to the top of the mountain above Points Cottage.

Ady had advised us to take a charged mobile phone with us, in case the weather turned. After the car drama, we took him at his word. Using sweets as bribes, we coaxed the children up the slope.

The view at the summit was sensational: on one side, England, green, elegant, pastoral; on the other, Wales, black, wild, magnificent. On a good day, you can see seven counties, but I couldn’t work out the geography. We drank in the view instead.

‘We must be on top of the whole entire universe,’ said Gus, chomping a Haribo.