Heartbeat actor Bill Maynard has died at the age of 89, his family has confirmed.

The actor played lovable rogue Claude Jeremiah Greengrass on the popular show between 1992 and 2000.

He previously starred in the Carry On film franchise as well as having roles in notable British shows including The Sweeney.

The actor had suffered with health problems in recent years and was using a wheelchair after having several strokes. 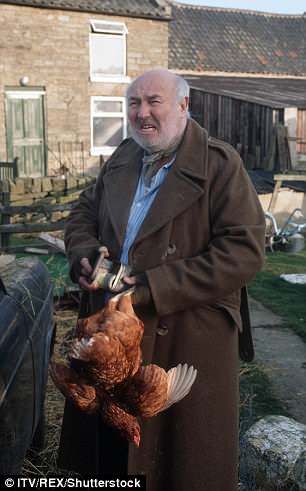 Maynard played lovable rogue Greengrass, left and right, on the show, a wily character who was always getting into trouble through dubious schemes

The star died in hospital in Leicestershire shortly after breaking his hip in a fall off his mobility scooter, his daughter-in-law said.

Jacqueline Reddin, who is also an actress, said: ‘He was larger than life and he just loved showbiz.

‘He was so proud of the fact that he had been working for 81 years.

Maynard was married twice, first to Muriel Linnett, with whom he had his two children including musician son Martin Maynard Williams, who performed with 1980s band Ryder in the 1986 Eurovision Song Contest, finishing seventh.