Breast cancer has stalked my family for generations

Harrowing, exhilarating, overwhelming. Life as a junior doctor was all of those things.

But of all the terrifying new experiences I had to deal with in my first year working in a hospital, there was one evening that easily trumps the rest.

It was when my father rang me, via the hospital switchboard, to tell me my mother had been diagnosed with breast cancer.

Standing in the office on the medical ward where I working, it felt unbelievable and terrifying, especially so when I was busy trying to learn how to deal with the pain and illness of others. But the news was also alarmingly expected. You see, there has always been a lot of breast cancer in my family.

Mum was always diligent at getting herself checked, above and beyond the usual screening programme for women. So although I was shaken when Mum was diagnosed, it was like the bad news we had all been waiting for.

That was in 2002, the year she turned 60. I remember her consultant calmly explaining the options to us, just as I had learned to do: surgery and radiotherapy for sure, and chemotherapy as an extra.

‘What would be the benefit of that?’ I asked the consultant, a breast surgeon who had taught me only a year or two earlier. ‘Having chemo will bring down the likelihood of recurrence from 13 per cent to 11 per cent, so not a huge amount,’ came the answer.

Many women with early-stage breast cancer choose not to have chemo as the downsides, in terms of the side effects, outweigh the small benefit.

‘We’ll take the chemo too please,’ I asserted with typical junior- doctor gusto, as if I’d just been offered an upsell at a checkout.

That was the fear of a daughter talking, rather than the level-headedness of a doctor. 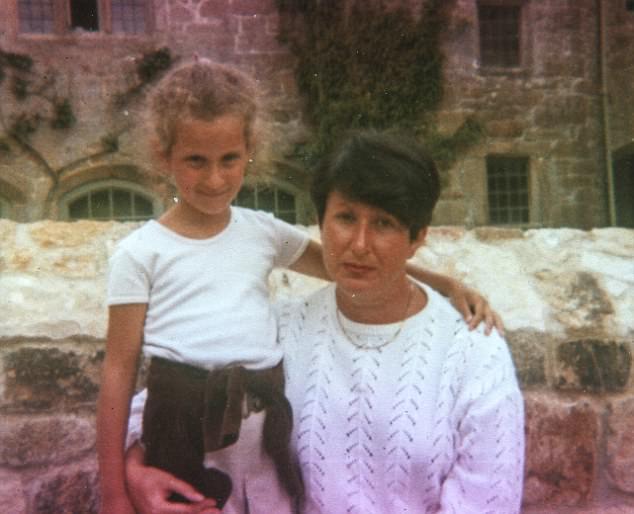 Pictured: A young doctor Ellie aged seven with her mother, who was cured

Mum went through surgery, six months of chemotherapy complete with sickness, lethargy, hair loss and everything else, and then embarked on radiotherapy.

She left the hospital, the year after diagnosis, battered and bruised but cured and remains so to this day, aged 75. By protocol, having been well for more than ten years, Mum doesn’t even warrant follow-up any more, but breast cancer is still this constant worry, particularly for me.

Because despite what I see very clearly – a significant tendency to breast cancer among the women in my family – it is not recognised medically as a significant family history that warrants any kind of special screening or medical attention for family members.

I feel like the fourth generation waiting for my turn. And the fifth generation will be my daughter Lottie, who is 13. But we are not considered high-risk.

I feel like the fourth generation waiting for my turn. And the fifth generation will be my daughter Lottie, who is 13. But we are not considered high-risk. It’ll be another decade before I’m invited for my first mammogram.

Women who are known to have hereditary breast cancer are given scans annually, at least. And as a doctor I know why I’m not offered this. The purpose of screening is to pick up disease at a very early stage, so it can be better treated and is less likely to be fatal. The NHS only offers mass testing to symptomless, seemingly healthy people, if it’s been proved to save lives. There is no such evidence that screening all women like me would prevent any deaths.

As a doctor, I know all this. But I find it hard to accept as a patient and as a mother that there is no clear plan of action other than waiting for the next diagnosis.

Specialists describe our cancer story as a familial cluster. The most common hereditary breast cancers are triggered by what are known as BRCA gene mutations, which cause aggressive cancer at a young age. Tests have shown we are negative for these. But cancer is common: if one woman in eight gets breast cancer, it is not beyond the realms of probability that a family could be affected as we have just by chance. And certainly so in an Ashkenazi Jewish family like mine, a racial group where cancer tends to be more common anyway.

But there are other potential reasons that can also explain it: families and races share not only genes but also lifestyles and environments. So you get the diseases your family do because you do the same things and live the same way, not because it is written in your DNA.

The paradoxical benefit of my aunt’s recent diagnosis actually means that I am considered very slightly higher risk than before, because I now have three first or second-degree relatives with breast cancer.

This has given me access to an NHS clinic for women who have a higher-than-normal risk of breast cancer. I’ll be seen later this month and I hope followed up more closely: something I have never been offered before.

And as I can’t ignore my family history, all I can do is try to mitigate my own lifestyle risks.

Risk factors for breast cancer are well documented and well researched. Next week, exclusively in The Mail on Sunday, you will find my 32-page How To Cut Your Risk Of Cancer guide.

In it, I speak to some of Britain’s leading experts to bring you the latest, evidence-based advice on understanding and hopefully minimising your personal risks.

The first instalment will tackle breast and prostate cancer, the two most common cancers in men and women. The following week, we will look at bowel cancer.

I feel like I’m doing my best by making sure I know what I can do to reduce the odds of developing breast cancer and I want to help you, the readers, to do the same.

But being proactive goes some way to dissipating my anxiety. My alcohol consumption is minimal as drinking is known to be associated with breast cancer. I also try to maintain a regular exercise routine.

This does not come naturally to me at all, but whether it’s spinning or running, I throw myself into exercise routines as I know how beneficial it is against cancer risk. And the notion of exercise despite a lack of sporting aptitude is currently being instilled in my daughter, for all the health benefits it will confer to her too.

To further protect myself even as a young woman, I never took the Pill for more than a few months as this is associated with breast cancer, and have always had a good routine of being aware of my own body and being vigilant to any changes.

So for now that is my plan, and this is the strategy and knowledge I will give my daughter.

I hope that by sharing my story, and reading my guide, you too will be inspired to make some changes that will help protect you, and your family’s health.

BE BREAST CANCER SAVVY – THREE RULES EVERY WOMEN SHOULD KNOW

YOU DON’T NEED TO EXAMINE YOUR BREASTS

All women, no matter what age, should get to know their breasts. But experts have stopped recommending self-examination routines. Studies have shown that most women who find breast tumours do so during the course of everyday life: while dressing, or just rolling over in bed. The key is to know what looks and feels normal to you.

The most common sign of breast cancer is a lump within the breast. But you might find one in the armpit or notice skin changes on the breast such as dimpling, and changes in the appearance of the nipple, or its shape or how it feels, or a discharge. Breast pain on one side that lasts after a period, a rash and any change in the size, shape or symmetry should be investigated.

MAKE SURE YOU GO TO THAT MAMMOGRAM

If breast cancer is detected early, it is more treatable. Screening uses mammograms – a type of X-ray – to look inside the breast. All women between 47 and 70 are invited for screening every three years. NHS screening is opt-in after 70, so make sure you get in touch with your local unit to make an appointment: nhs.uk/breastscreening.