A breast cancer sufferer has proudly posed topless to show off her double mastectomy scars in the hopes of inspiring other women to embrace their post-surgery bodies.

Kelly Garrison, a 46-year-old mother-of-two from Florida, was shocked when she was diagnosed with the disease last year – and she says she was happy to lose her breasts if it gave her a chance to live.

‘I’d rather lose my boobs if I know it gives me an extra day to live,’ the former Starbucks manager shared.

Proud: Breast cancer sufferer Kelly Garrison posed topless to show off her double mastectomy scars in the hopes of inspiring other women to embrace their post-surgery bodies 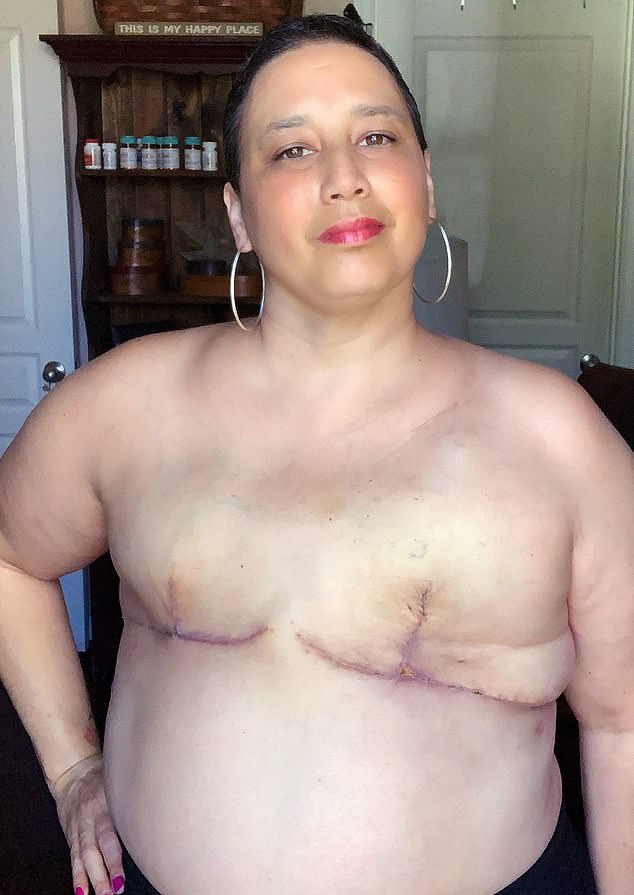 Fight:  The 46-year-old mother-of-two, from Florida, was diagnosed with an aggressive form of the disease in August 2019, and underwent her mastectomy at the height of the pandemic 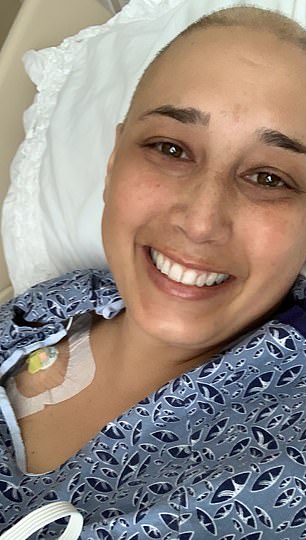 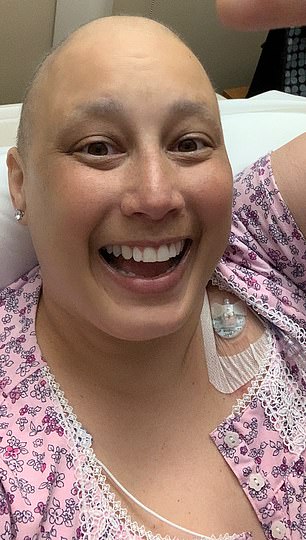 Battle: Kelly is currently going through a second round of chemotherapy

Kelly underwent a double mastectomy, an operation where both breasts are surgically removed, in a Florida hospital at the height of the coronavirus pandemic and is now on another course of chemotherapy.

She shared pictures of her scars on social media to help her love her new body after treatment left her feeling that she had lost her femininity.

‘With the chemo I did, I lost my hair, my nails turned black, I gained weight and I had sores in my nose,’ she said.

‘I took it in my stride and when my hair started to fall out – my fiance shaved my head for me.

‘I wanted to share the pictures because of the insecurities women go through.

‘You lose a part of your sexuality and womanhood when this happens. 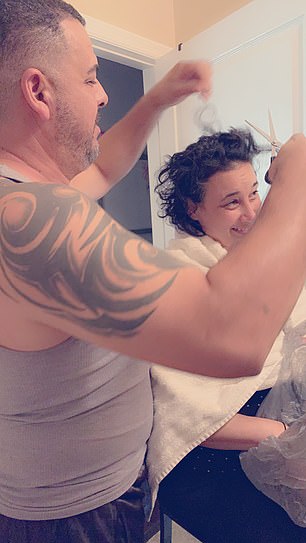 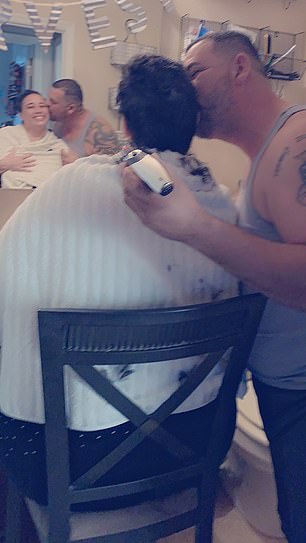 Support: The former Starbucks manager chose to shave her head when her hair started falling out – and had the help of her fiance Willie Miranda, 51 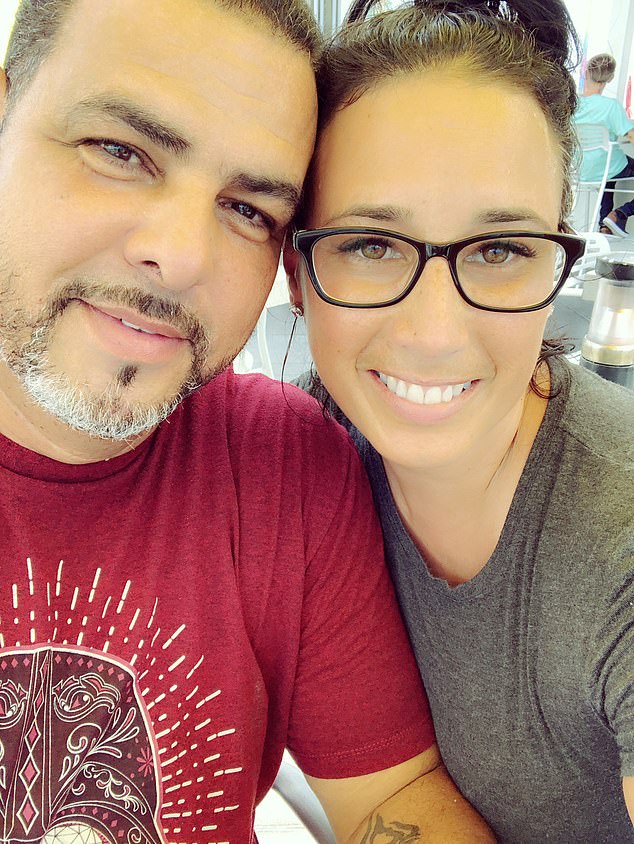 Symptoms: As well as losing her hair, Kelly put on weight as a result of chemo. She also had black nails and sores in her nose – all of which damaged her self confidence 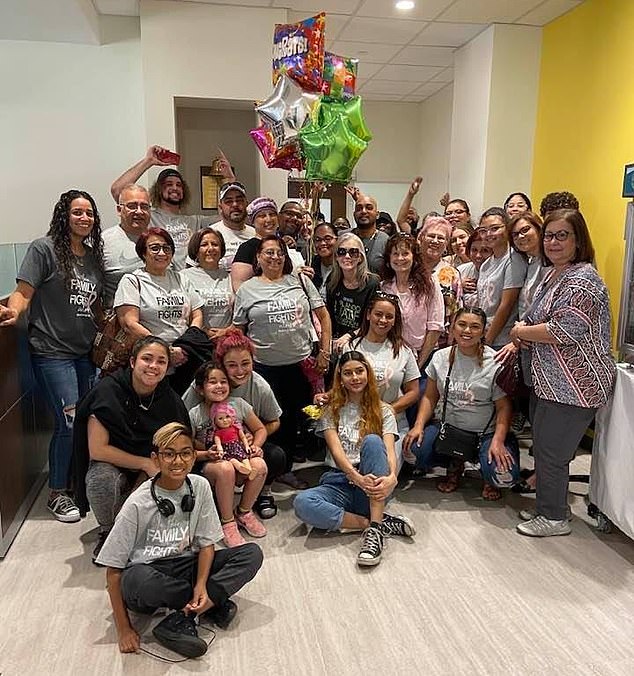 Celebration: Kelly, pictured at the hospital after undergoing treatment, says she wants to show other breast cancer sufferers and survivors that they should be proud of their bodies

‘Your body turns into something you no longer recognize in the mirror.

‘Eventually I realized this is the new me and I needed to learn to love the new person I am now.’

Kelly, mom of Robert, 24, and Allison, 22, said that the pandemic made her treatment harder as the chemotherapy left her immune system dangerously weak and susceptible to the deadly virus.

She even had to stop seeing her children for fear of infection.

But she still managed to go on socially distanced dates with her fiance Willie Miranda, 51, a school custodian.

Willie even surprised Kelly with a romantic proposal on Christmas day 2019, four months after her diagnosis.

‘With COVID going on, I hardly go out anywhere,’ she said. 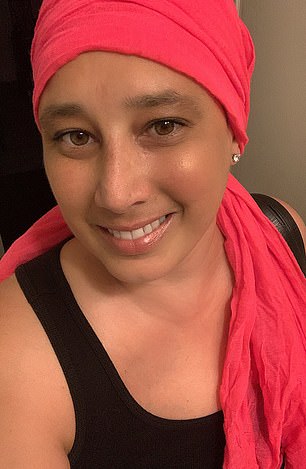 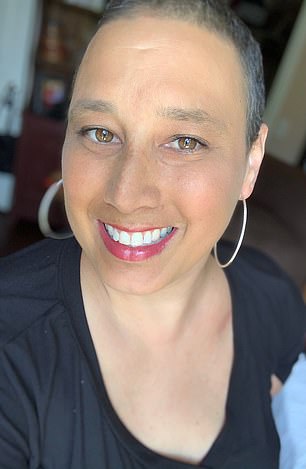 Inspiration: ‘I wanted to share the pictures because of the insecurities women go through. You lose a part of your sexuality and womanhood when this happens,’ she said of her topless snaps 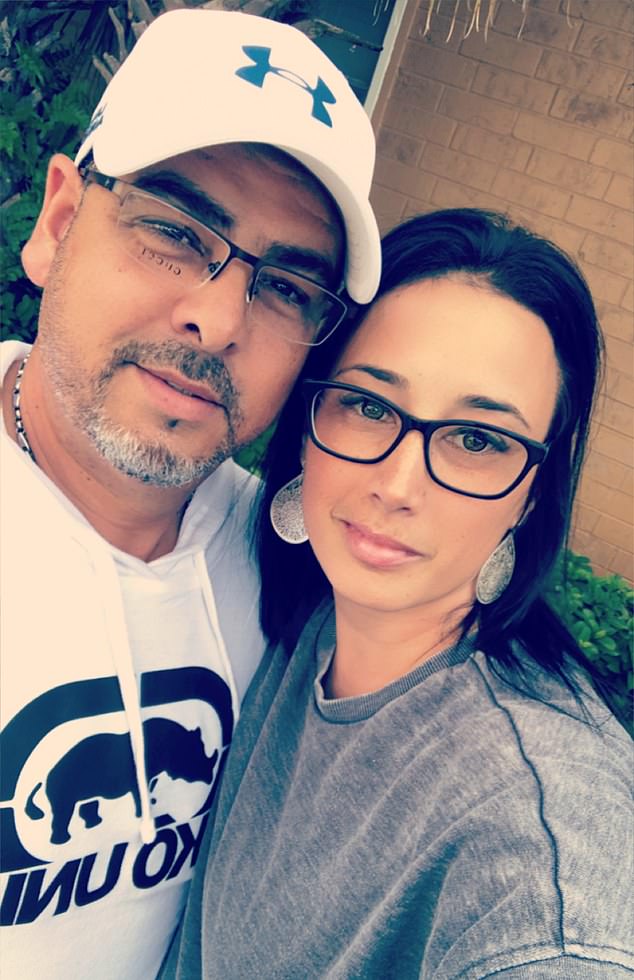 Tricky: At the height of the pandemic, Kelly wasn’t able to see her children over fears for her health and safety – and she could only enjoy socially distanced dates with fiance Willy 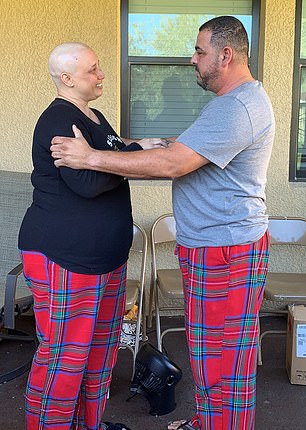 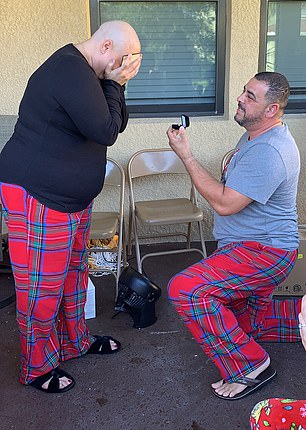 Looking ahead: Kelly, pictured when Willy proposed, plans on having breast reconstruction surgery once she gets the all-clear by her doctors, but she wants to love herself as she is now

‘When I go to the hospital, I had to go by myself and Willie would wait outside in the car.

‘I have to be extra careful and there were times I couldn’t see my own kids after my surgery because of the risk.

‘Willie and I still have date nights but we order our food and eat it in the car.

‘It just makes your life a little more hectic because you have to stay secluded.’

Kelly plans on having breast reconstruction surgery once she is given the all-clear by her doctors, but she wanted to love herself as she is now.

‘Sometimes I hated to look at my reflection because I didn’t feel like that person.

‘I want other women who are going through this, who are afraid and ashamed, to know they need to learn to love their new body and not hold on to the old one.’