Two years after she was diagnosed with breast cancer, 10-year-old Chrissy Turner is happy, in remission, and shyly beginning to consider what she wants her breasts to look like.

Just over a month ago, Chrissy had her first appointment with a plastic surgeon, to start coming up with a plan for how doctors will reconstruct her left breast.

When she was eight years old, Chrissy became the youngest person to be diagnosed with secretory breast carcinoma, a rare form of the disease that accounts for only about one percent of all breast cancers.

Chrissy, of Centerville, Utah, wasn’t even old enough to buy her first bra when she had to have a mastectomy to remove all of her right breast tissue and save her life.

Chrissy Turner was diagnosed with a rare form of breast cancer and had to undergo a mastectomy in December 2015 (left). But as of her 10th birthday in July (right), Chrissy is cancer free, active as ever, and starting to think about puberty and breast reconstruction

In October of 2015, Chrissy told her parents about a lump on her chest that was scaring her.

Scared, but determined to be proactive, Chrissy’s parents Annette and Troy took her to two doctors that dismissed the lump as the result of an infection, or a non-cancerous tumor.

Finally, a third doctor recognized the lump for what it was. In November of 2015, Chrissy became one of the youngest people ever to be diagnosed with the rare form of cancer.

Chrissy’s parents were no strangers to bad news. Both Annette and Troy have fought cancer. Annette won her battle with stage one cervical cancer, while Troy has been battling non-Hodgkin’s Lymphoma since Chrissy was a baby.

But their past experiences did nothing to ease the pain of telling their daughter what her lump was, and what would have to be done about it. 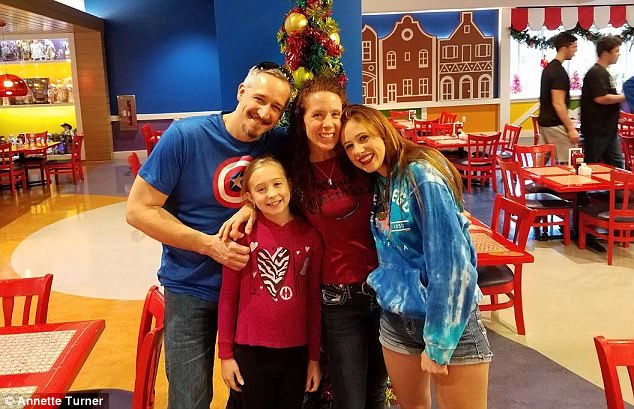 Nearly the entire Turner family has battled cancer. Troy (left) is in remission from Non-Hodgkin’s lymphoma, Chrissy (left of center) from breast cancer, and Annette (right of center) from cervical cancer. The three survivors pose with the oldest Turner daughter, Brianna, 17, on Chrissy’s Make-A-Wish trip to Disney World, in Orlando, Florida in January 2017

One month later, Chrissy was on the operating table to have all of the tissue of her right breast removed, so that the cancer would – hopefully – spread no further.

After the surgery, Chrissy’s parents, Annette and Troy were thrilled to learn that her next PET scan was clean; Chrissy’s cancer had been localized to her breast tissue, and hadn’t spread to her lymph nodes.

She was cancer free, and would not have to go through radiation treatment.

Even as the family celebrated the good news for Chrissy, they were still facing another challenge: Troy’s cancer had come back.

Troy had been diagnosed with stage 3 non-Hodgkin’s lymphoma in 2008. After eight months of chemotherapy, he’d gone into remission, but in 2011, his doctors found ‘hot spots’ or areas of concern. The hot spots kept the Turner family on their toes, fearing that they would develop into something more.

Whether at the end of a long day, or harrowing battles with cancer, the family stays relentlessly positive.

And two years later, it seems to have paid off. Annette’s cancer has never come back, and Troy’s and Chrissy’s cancers have both stayed in remission.

Annette says that Chrissy’s surgery ‘hasn’t slowed her down a bit.’

Only eight months after her surgery, Chrissy wanted to get back on the monkey bars. Annette worried about the muscles affected by her daughter’s surgery, but ‘she just went after it,’ she says. 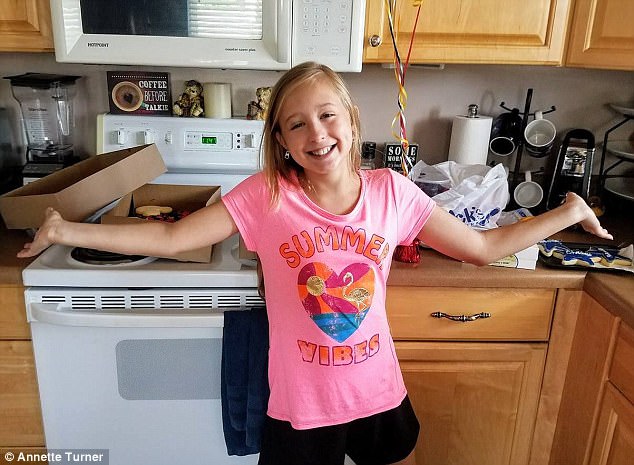 Good vibes: Ten-year-old Chrissy was the face of local Centerville, Utah grocery stores that partnered with Make-A-Wish Foundation for a fundraiser in July 2017. She poses in front of the cookies, cakes and balloons they sent home with her as thanks 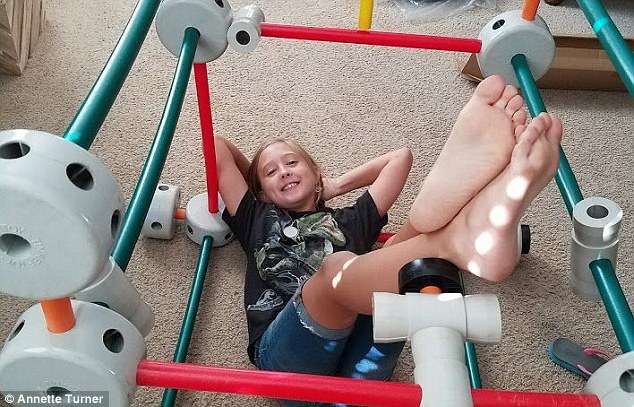 Chrissy is not an average 10-year-old girl, her mother says, not because of her cancer, but because she prefers dragons, like the one on her shirt, over dress-up or dolls

‘Honestly, with all we’ve gone through, she’s doing really well,’ Annette says of her daughter.

Chrissy’s life has, for the most part, returned to normal. She gets check-ups and scans for cancer every three or four months, and Annette says she’s ‘not your typical girl,’ but it’s not because of the cancer.

Chrissy only likes pink to support cancer; she much prefers anything to do with dragons, drawing, dancing and reading (mostly about dragons). She and her 17-year-old sister, Briana have only grown closer since Chrissy’s diagnosis, and both love spending time with their close-knit family.

‘We’ve all had such close brushes with cancer,’ Annette says of three quarters of her family. ‘It’s really aligned us.’

Everything that Chrissy has been through has ‘made her heart grow even more,’ says Annette.

She says that Chrissy ‘has always been a loving and compassionate child, but she’s even more protective of those with disabilities. It’s really special to see how she interacts with other kids.’

Chrissy and the Turner family stay connected to a Utah charity called the Mascot Miracles Foundation, that reached out to them when Chrissy was first diagnosed. Chrissy was also ‘the face’ of local Centerville, Utah grocery stores that partnered with Make-A-Wish Foundation for a fundraiser this summer, after she went on her own Make-A-Wish trip to Disney World in Orlando, Florida in January. 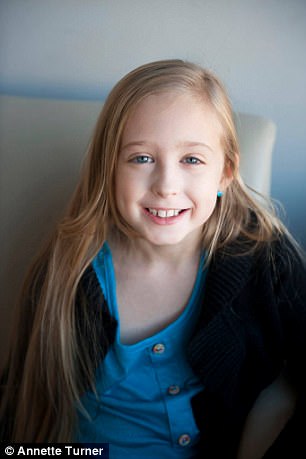 Chrissy Turner smiles bravely just days before she underwent a mastectomy in December 2015, when she was only eight years old

The Turner family takes every day in stride, knowing that the future is uncertain.

‘The hardest part is that we have yet to see [Chrissy] evolve,’ her mother says. ‘I know that there’s going to be parts of her puberty, as she grows, that will be hard.’

Annette has had to tell her daughter that, unlike other girls, she’ll only grow on one side of her chest, but says that that doesn’t seem to bother Chrissy much either.

‘That could change, she’ll go through emotions I’m sure, but whatever she needs, we’ll support her however we possibly can,’ Annette says.

Recently, that meant accompanying a shy Chrissy to meet with a plastic surgeon, ‘so that she’s prepared, she knows what’s coming.’

Annette says that Chrissy is open-minded, and confident about what she wants, but still a little reluctant to talk about ‘it,’ meaning the eventual reconstruction of her right breast.

‘At first she was nervous, she didn’t really want to talk about it,’ Annette says, but the family and doctor ‘kind of got her laughing. They even showed her a breast implant and what that looks like,’ Annette says.

‘By the time we left, she was really lighthearted,’ Annette says.

Chrissy still has a few years before she has to begin the process of reconstruction. Her doctors have recommended that she have a tissue expander placed when she is 15 or 16, to prepare her for a permanent implant.

Until then, she can wear a prosthetic insert to help her right side look uniform as her left develops.

‘Chrissy is just a glowing ray of positivity,’ Annette says. ‘She brings smiles to everybody’s faces.’

‘With what we’ve gone through, it just solidifies the importance of hope…every breath of life is worth fighting for,’ Annette says.