Breathtaking! The artificial lungs for human transplants made of tobacco

Scientists are developing artificial lungs for human transplants — using, of all things, tobacco.

The unlikely material is modified to produce a synthetic form of collagen, the fibrous substance that makes up the ‘scaffolding’ of many major organs.

The researchers have found a way to genetically modify tobacco plants to produce large quantities of collagen almost identical to the body’s own.

This is turned into a type of ‘ink’ and loaded into a 3D printer, which produces man-made lungs by building up layer after layer of the replica collagen. The lungs are then seeded with the patient’s own stem cells (extracted from skin samples), to develop them into healthy lung tissue suitable for transplant.

Surprising: Tobacco, it turns out, is the ideal vehicle for growing collagen as the plant matures quickly — in just eight weeks — and could be used to mass-produce artificial lungs

The scientists hope the technique — which is still at a very early stage — could be used to mass-produce artificial lungs so patients needing transplants no longer have to wait the months, or even years, it can take to get a suitable donor organ.

It could mean that the very plant that has caused millions of deaths through smoking-related diseases can instead be used to save lives.

Tobacco, it turns out, is the ideal vehicle for growing collagen as the plant matures quickly — in just eight weeks. So there is a constant supply for making artificial lungs.

Recent figures from NHS Blood and Transplant revealed that the number of people in the UK waiting for a lung transplant has risen by 46 per cent in the past five years to 354, up from 242 in 2013.

It’s thought improvements in trauma care have boosted survival rates among accident victims (so reducing donations); the figures may also reflect the fact referrals for lung transplants have gone up in line with increased awareness of the benefits.

The average wait for a lung transplant is 233 days; one in four dies before having a transplant. But the tobacco-based lungs may one day be a viable alternative.

Collagen protein molecules pack tightly together to form strong strands, which act as a support structure for cells to grow on. 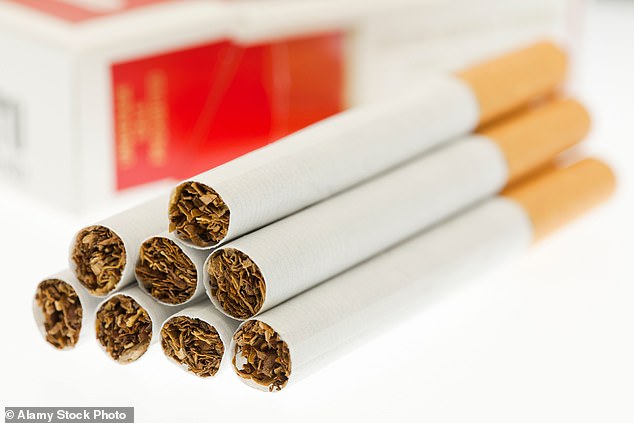 Help: The average wait for a lung transplant is 233 days; one in four dies before having a transplant. But the tobacco-based lungs may one day be a viable alternative

There are dozens of different types and some are, weight for weight, stronger than steel.

Doctors already use collagen in wound dressings and skin grafts, to provide a lattice-like framework for new cells to bond with. But it currently has to be taken from cadavers or animals — donated human tissue can be rejected by a recipient’s immune system, while animal tissue always carries the risk (however small) of viruses or bacteria crossing species.

Scientists at Israeli biotech firm CollPlant have perfected the method of growing collagen in tobacco plants in just eight weeks. They take seedlings and add five human genes vital for collagen production. When the plants mature, the leaves are harvested and processed to make ‘BioInk’, a purified collagen extract liquid.

Now, a U.S. firm, United Therapeutics, is building a 3D-printer capable of using the ink to create the artificial lungs. Such printers have been used to make human skin and even retinas for the eye, but these are relatively small, thin tissues. Printing a more complex organ needs a bespoke machine that’s also able to cope with collagen’s large molecules.

As the light hits the collagen, it ‘cures’ and becomes solid.

So far, the firm has produced only a small section of lung tissue — including part of the trachea (windpipe) and the two bronchi that pass from it to the lungs. The tissue is just a couple of inches in length. The researchers have yet to develop it into functioning human lungs by coating it with the stem cells that produce healthy tissue ready for transplant.

However, animal experiments suggest the process can work.

Earlier this year, Harvard University scientists stripped a pig lung of its cells, using detergent, then populated it with billions of human stem cells extracted from umbilical cord blood. The results, published in the Annals of Surgery, showed when the new lung was reconnected to a pig’s circulation, the resulting organ functioned like a healthy lung.

But the technology is not without risk. In 2008, scientists at the Karolinska Institute, Sweden, implanted eight artificial tracheas into lung cancer patients — six later died as it emerged the plastic material used became infected with inhaled bacteria and viruses.

Professor Brendon Noble, chief scientific officer at the UK Stem Cell Foundation, says the tobacco-grown lungs have the potential to transform transplant surgery and may be available within ten years.

But there is a long way to go, he adds. ‘There are a lot of challenges to overcome. It is unclear whether this rather simplistic approach of cells in a “scaffold” can be used to build complex and large structures such as the lungs.’