Brendan Rodgers was glad to see his Celtic side get back on track with a 2-0 Ladbrokes Premiership win over Partick Thistle at Parkhead.

The 4-0 defeat at Hearts on Sunday was the Hoops’ first domestic loss in 70 games and it was a lacklustre Celtic team who led at the interval against Thistle through a powerful 35th-minute strike from midfielder Stuart Armstrong.

Left-back Kieran Tierney added a second in the 67th minute to make sure of the win which took the champions five points ahead of second-placed Aberdeen, who visit on Saturday, leaving Rodgers pleased.

He said: ‘It is a mark of our team. I have seen that in my time here.

‘I said before the game that you define yourself as a team whenever you have disappointment, and your reaction to it.

‘Tonight the players reacted very well. It was always going to be a tricky game.

‘Last season we only won 1-0 and drew 1-1 here against Thistle so we always knew it was going to be difficult but I thought we came through it very well.’

One flash point came in the second half when Thistle substitute Gary Fraser, on in the 73rd minute for Blair Spittal, hammered the ball into Celtic fans in the main stand after it had gone out of play.

The Jags player was booed by the home supporters thereafter.

Partick Thistle boss Alan Archibald leapt to the defence of Fraser after the incident caused ill feeling at the end of the game. 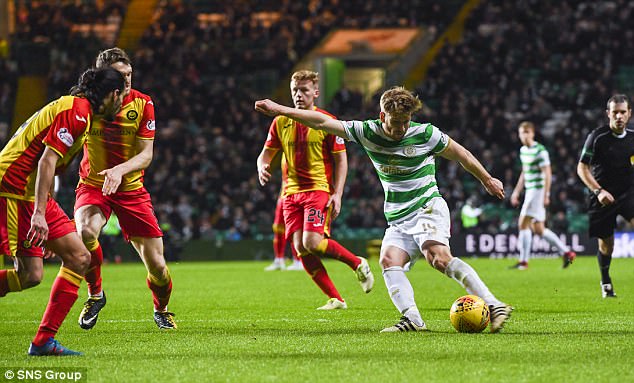 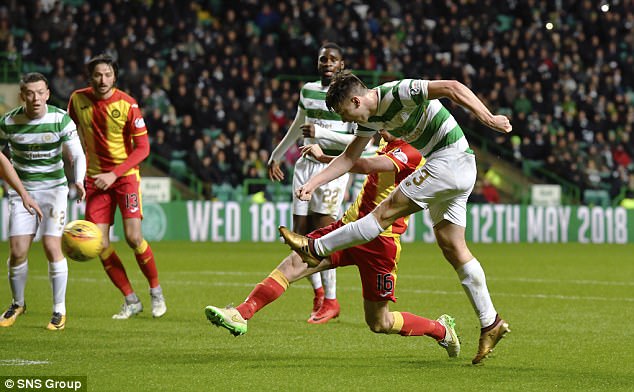 Archibald insisted that 23-year-old midfielder Fraser had tried to hit the advertising board in anger when the ball went out of play – only to see the ball fly towards supporters instead. He was roundly booed thereafter.

‘He didn’t mean it,’ said the Jags boss, who sent Fraser on for Blair Spittal in the 73rd minute of a 2-0 defeat. ‘He tries to hit the board out of frustration as he didn’t start the game. I don’t think there was any malice in it. He’s not that type of lad.

‘Nobody in their right mind would do that from so close, especially the way he strikes the ball. There was no reason for it, nothing in it.

‘We’ll deal with it. He’s not done it deliberately and he’s tried to apologise at the end. That’s all we can do.’

Rodgers also seemed prepared to give Fraser ‘the benefit of the doubt’, with the player appearing to gesture an apology towards the Celtic boss at the final whistle.

Rodgers said: ‘I didn’t see it and just caught the tail end of it. I would have to give the benefit of the doubt to the player as I would sincerely hope he wouldn’t be smashing the ball into a crowd on purpose.

‘My staff told me what happened and so we would like to think he didn’t mean it but I’d certainly like to see it again.

‘I think it’s a respect element as well. I don’t think there’s a need to do it. 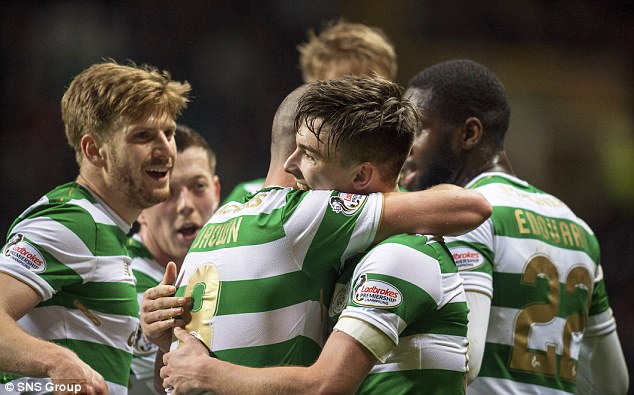 ‘You get that close to supporters who are paying money to watch a game then you shouldn’t be doing things like that.

‘Maybe it was frustration from the young player because he’s not playing or he is losing the game but you don’t do that.’

Manager Alan Archibald, whose side remain bottom of the table, two points adrift of Ross County, backed Fraser, claiming his player had apologised.

He said: ‘He didn’t mean it. He tried to hit the boards out of frustration. That’s what he said.

‘He is frustrated he never started the game. I don’t think there was any malice, he is not that type of lad.

‘We will deal with it. He has not done it deliberately and he apologised at the end.

‘I don’t think anyone in their right mind would try and do that from so close, especially the way he strikes the ball.’