Breonna Taylor was alive for FIVE MINUTES after police shot her, boyfriend claims

BY FRANCES MULRANEY FOR DAILYMAIL.COM

Louisville police went through with a warrant search on Breonna Taylor’s apartment despite it being previously called off, her family says in a new court filing.

The family of the 26-year-old EMT, who was fatally shot in her home by police operating on a no-knock warrant, has alleged that the drug suspect linked with Taylor had been located elsewhere earlier that night, resulting in the end of the need for the warrant.

They claim, however, that officers continued to carry out the deadly raid, looking for suspects who had no connection to Taylor.

National civil rights attorney Ben Crump, who is representing the family, said that the officers involved ‘exhibited outrageous, RECKLESS, willful, wanton & UNLAWFUL conduct’ and that they ‘should NEVER have been at Breonna Taylor’s home in the first place’.

The suit, filed by Taylor’s mother Tamika Palmer (pictured), suggests that her daughter’s slaying was a result of a warrant search that had already been called off that night

Taylor was killed on March 13 when officers burst into her apartment in the early morning hours. She had been asleep moments before her death.

The shooting set off weeks of protests, policy changes and a call for the officers who shot Taylor to be criminally charged.

‘Connecting the dots, it’s clear that these officers should never have been at Breonna Taylor’s home in the first place, and that they invaded the residence with no probable cause,’ Crump said in a statement.

Crump and other Louisville attorneys are representing Taylor’s mother, Tamika Palmer, in a civil lawsuit, which was amended this week to include new allegations about the night of the shooting.

‘The officers who ROBBED Bre of her LIFE – and Tamika of her daughter – exhibited outrageous, RECKLESS, willful, wanton & UNLAWFUL conduct,’ Crump added in a tweet.

National civil rights attorney Ben Crump, who is representing the family, announced the new allegations that Taylor’s family has added to their civil lawsuit over her shooting

‘The city lost one of its most precious essential frontline workers, who risked her life daily to save her fellow residents in a pandemic.

‘This is a grievous offense against Breonna, her family, and the greater Louisville community.’

Louisville police have declined to comment on the investigation, and an internal probe of the officer’s actions has been turned over to the Kentucky attorney general for review.

The FBI is also investigating potential civil rights violations by the police.

The warrant used to enter Taylor’s home just after midnight was secured by police observing an alleged drug dealer, identified in the complaint as ‘JG,’ at Taylor’s home two months earlier. 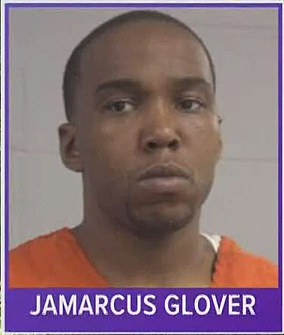 Police had been searching for Jamarcus Glover, pictured, who was arrested that night more than ten miles away and with whom Taylor had a previous relationship

Taylor and the man had a prior relationship, the family’s suit said.

But that man, Jamarcus Glover, was arrested that night more than ten miles away, though two other suspects the police were looking for were not with Glover, the suit said.

Those suspects, identified in the suit as ‘AW’ and ‘DC’ never had a relationship with Taylor and neither looked like Kenneth Walker, Taylor’s boyfriend who was with her the night she was shot, the court filing said.

The suit said ‘AW’ lived at a separate address that police also had a warrant for, but they proceeded to search Taylor’s house to see if he or the other man were there.

An ambulance that had been stationed near Taylor’s apartment in anticipation of the initial search had been called off, the suit said.

It said the EMS unit was cleared because police ‘had never actually intended to raid Breonna’s home unless (Glover) was there.’

‘As such, it does indeed appear that the (police) ‘hit the wrong house’ when they went to Springfield (Taylor’s apartment), rather than actually hitting the house in which the target was actually located,’ the 31-page complaint added.

Police arrived at Taylor’s apartment about 12:40 a.m. and banged on the door but did not say they were police officers, the suit said.

Louisville police have said they knocked and announced their presence at the apartment. 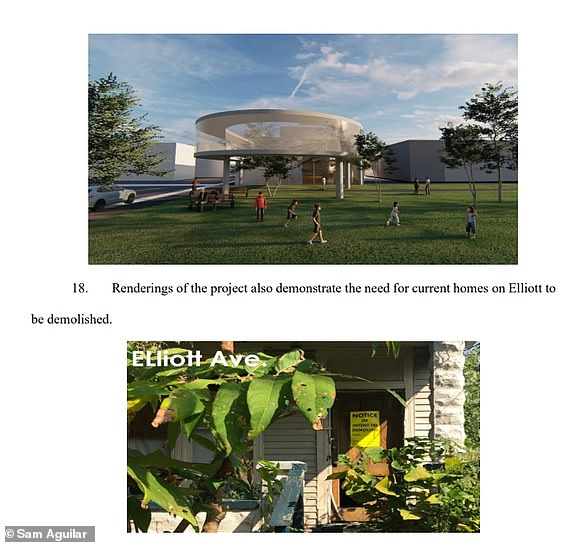 Taylor’s neighbors and her family dispute this.

After the door was knocked down by a battering ram, Officer Jonathan Mattingly went inside and was shot in the leg by Walker, who has said he didn’t know who was entering the apartment and was firing a warning shot.

Taylor was struck by bullets in the hallway and suffered eight gunshot wounds.

Walker was arrested and charged with first-degree assault and attempted murder of a police officer after Sgt. Jonathan Mattingly was shot in the leg during the raid.

The attempted murder charge against Walker was later dropped.

Hankison, 44, was later fired after it was found he violated department policies by ‘blindly’ firing 10 rounds into Taylor’s home during the incident. The two other cops have been placed on administrative  reassignment. 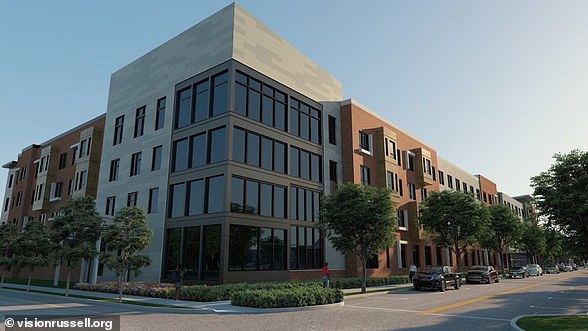 The redevelopment plan includes a revitalized Beecher Terrace public housing development component. Pictured is a rendering of the new buildings

The family’s suit, which named the three officers as defendants, said Taylor lived for another five or six minutes after she was shot but an ambulance was not on the scene.

The complaint also said police conducted a concerted effort to remove Glover and other alleged drug dealers from a residential area near downtown to make way for a new development with federal funding.

The family claims the botched raid was linked to a plan to clear out Louisville neighborhoods so a $30million gentrification project could move forward.

Glover was one of the ‘primary roadblocks’ to the area’s redevelopment, according to the lawsuit published in The Courier Journal.

Jean Porter, a spokeswoman for Mayor Greg Fischer, called the allegations ‘outrageous’ and ‘without foundation or supporting facts.’

Other advocates of the project, including Mary Ellen Weiderwohl, who leads the city community development group Louisville Forward, said those allegations in the suit are a ‘gross mischaracterization’ of a plan to build new affordable housing in low-income areas.

The warrant, which was approved the day before Taylor died, had been based on a detective’s belief that Glover used Taylor’s residence to receive mail, keep drugs, or stash money from the sale of drugs.

Detective Joshua Jaynes wrote in an affidavit seeking the no-knock search warrant that he spotted Glover leave Taylor’s apartment in January with a US Postal Service package before driving to a ‘known drug house.’

Jaynes claimed that he had verified Glover was receiving mail at Taylor’s address, ‘through a US Postal Inspector’.

However, a Louisville postal inspector told WDRB that a different agency had reached out about Glover receiving suspicious mail at the home, a claim that was determined unfounded.

‘When the layers are peeled back, the origin of Breonna’s home being raided by police starts with a political need to clear out a street for a large real estate development project and finishes with a newly formed, rogue police unit violating all levels of policy, protocol and policing standards,’ the family’s attorneys claim.

‘Breonna’s death was the culmination of radical political and police conduct.’

The Place-Based Investigations squad, which executed the search warrant, was formed to go after criminals in ‘systemically violent locations’ and support other law enforcement activities, according to the department’s organizational structure.

‘PBI focuses on identifying and disrupting crime place networks,’ said the department on its website.

‘These networks include crime sites, but also places used by offenders that do not typically come to the attention of police. PBI will collaborate with other government and community partners to identify and eliminate violence facilitators.’

Glover and a second suspect named Adrian Walker were in all five warrants.

‘The reality was that the occupants were not anywhere close to Louisville’s versions of Pablo Escobar or Scarface,’ the family’s lawsuit says.

‘And they were not violent criminals. They were simply a setback to a large real estate development deal and thus the issue needed to be cleaned up.’