Furious British expats have blasted post-Brexit travel rules which will prevent them from spending more than three months at a time at a holiday home in the EU.

New travel restrictions will come into force on January 1 after the end of the ‘standstill’ transition period.

They will mean that Britons will only be allowed to stay in a European country without a visa for a maximum of 90 days in every six month period.

EU countries are under pressure to change the rules to allow longer stays amid fears the measures will spell the end for many people’s dreams of having a foreign bolthole.

People who exceed the 90 day limit could face the threat of a fine or even be banned entry to the EU’s Schengen travel zone.

Britons will only be allowed to stay in a European country without a visa for a maximum of 90 days in every six month period under post-Brexit rules. Pictured is a beach in the Bay of Lindos in Rhodes, Greece

There are an estimated 500,000 Britons who own a holiday home somewhere in Europe and the new rules could make it difficult for them to get value for money from their purchase.

Anyone who wants to stay in an EU country for longer than three months will likely have to apply for a visa.

What are the new EU travel rules which will apply from January 1?

The UK’s decision to leave the EU means that freedom of movement will no longer apply to Britons travelling in Europe.

Britain and the bloc are currently in a ‘standstill’ transition period which will come to an end next month.

Travel rules will then change from January 1 as the two sides properly begin life after Brexit and the UK is treated like any other ‘third country’.

From the start of 2021, British tourists will be allowed to spend up to three months in any six month period in European nations.

Anyone looking to stay for longer than 90 days in every 180 days will have to apply for a visa, a work permit or for permanent residence.

Anyone who breaches the rules could face fines or a ban on entry to the EU’s Schengen area.

Travel rules are ultimately a matter for each European nation to decide.

For example, in France after Brexit if someone wants to stay for longer than 90 days they will likely need to apply for a so-called ‘Long Stay’ visa.

These visas can last for between three months and one year and it costs 99 euros to apply for one.

Applications have to be submitted to the French embassy with applicants often invited to attend an in-person interview.

There is a similar system in place in Spain where the application fee is 80 euros.

Campaigners are calling for the rules to be changed to allow people to use their 90 day allocations continuously.

This would allow them to spend six months in a row at their holiday home so they could take full advantage of the Spring and Summer months.

David Young, who set up campaign group 180 Days in Greece to fight the new rules, told The Telegraph: ‘Like me, many Brits divide their lives between two countries, but after Brexit – unless they apply for full residency in the EU country where they’ve bought their property, pay taxes there, and lose their NHS provision back home – second-home owners will be limited to stays of a maximum of 90 days.’

He added: ‘Citizens from the EU, EEA and Switzerland who want to stay in the UK for up to six months will not require a visa post-Brexit. All we are asking for is parity.’

Briton Mark Ellis, who works in Gabon, Africa, owns a home in Germany where he planned to spend half the year in the future.

He told MailOnline: ‘I lived and worked in Germany for 5 years, bought a flat which was going to be where I retired to.

‘Now? I’m still working elsewhere overseas but that plan is gone for a Burton.

‘So I have to choose between giving up being British or going where my life has taken me – legally and in accordance with our Government’.

Anthony Gasson, who has a home in northern France, told MailOnline: ‘All I am asking for is parity, and to have the same rules for us as EU citizens have in the UK.

‘We bring money into the local economy all the time we are there so I don’t understand why we should be discouraged from spending our six months in any one year whenever we want to.’

Kate Key, 70, owns a holiday home in Normandy, France, and she told MailOnline the new rules will make it harder for her to see her son and his family who live in the region.

She said she would normally stay in France from March through to October. But she said: ‘Under the new rules if I go in March and use my 90 days it means I cannot return until mid-September which will only give me a few weeks until the end of season.’

She said the new rules will mean she is ‘forced to spend a lot of time alone at home in the UK’ and she is ‘dreading the loneliness’.

The new rules also sparked anger online. One expat tweeted: ‘My partner is an EU national, I work between UK and the EU, have an inherited family flat in an EU capital which I’ll be able to use for 90 days at a time. I really object to my life being turned upside down.’

‘All we are asking for is parity’: How British author’s idyllic life in Greece is under threat

The crime author is one of thousands of second-home owners in Greece, living in a picturesque property with views of the Aegean Sea.

But 62-year-old Mr Young set up campaign group 180 Days in Greece to fight the new rules after realising he cannot spend more than three months at a time at his house in Greece. 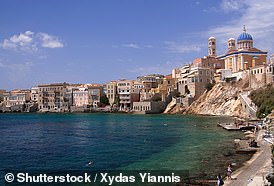 Mr Young lives on the Greek island of Syros

He told The Telegraph: ‘Like me, many Brits divide their lives between two countries, but after Brexit – unless they apply for full residency in the EU country where they’ve bought their property, pay taxes there, and lose their NHS provision back home – second-home owners will be limited to stays of a maximum of 90 days.’

He added: ‘Citizens from the EU, EEA and Switzerland who want to stay in the UK for up to six months will not require a visa post-Brexit. All we are asking for is parity.’

Another claimed EU nationals will not face the same rules. He said: ‘The irony of the freedom of movement, after the 31st of Dec I can now only spend 90 days in any 180 in the EU but EU citizens can come to the UK and stay for 180days in one trip’.

The official UK Government guidance on the new rules states: ‘From 1 January 2021, you will be able to travel to other Schengen area countries for up to 90 days in any 180-day period without a visa for purposes such as tourism. This is a rolling 180-day period.

‘To stay for longer, to work or study, or for business travel, you will need to meet the entry requirements set out by the country to which you are travelling.

‘This could mean applying for a visa or work permit. You may also need to get a visa if your visit would take you over the 90 days in 180 days limit.

‘Periods of stay authorised under a visa or permit will not count against the 90-day limit. Travel to the UK and Ireland will not change.’

The row over post-Brexit travel rules came as the UK and the EU remain deadlocked in trade negotiations.

The two sides are meeting in London for the latest round of talks amid hopes a deal could be in sight by Friday.

Environment Secretary George Eustice warned this morning ‘we really are now running out of time’ to strike an accord as the clock ticks down to the end of the transition period.

He said Britain and Brussels are entering a ‘crucial week’ and ‘we need to get a breakthrough’.

But he said there could be scope to extend negotiations beyond Friday if the two sides are ‘nearly there’ on an agreement.

However, he said eventually there will ‘come a point’ where it will be ‘too late’ for an accord because the EU and the UK will need time to ratify and roll out any deal before January 1.

His comments came after Foreign Secretary Dominic Raab said yesterday that ‘there is a deal to be done’ but fishing rights is still the ‘one outstanding major bone of contention’.

As well as fishing, the two sides remain in a state of stalemate over the so-called ‘level playing field’ on rules and the future governance of the deal.

Face-to-face talks between Michel Barnier, Brussels’ chief negotiator, and Lord Frost, his UK counterpart, resumed at the weekend after discussions were suspended after an EU official tested positive for coronavirus.

Mr Barnier said this morning there were ‘reasons for determination’ as he left his hotel in Westminster to head back to the negotiating table.

With time now running out, there are fears the UK and the EU could accidentally end up without a trade accord due to a miscalculation or a misplaced belief that the other side will compromise at the last minute.

A failure to strike a post-Brexit trade agreement will see Britain and Brussels forced to trade on basic World Trade Organisation terms from January 1 and that will mean tariffs being imposed on goods.