Brexit trade talks stalled today as the EU’s chief negotiator Michel Barnier warned the bloc will not ‘bargain away our values for the benefit of the British economy’.

The third round of negotiations has now concluded but the chances of a deal by the end of the year appear to be slipping after each side blamed the other for a lack of progress.

Mr Barnier said the bloc wants a ‘modern’ agreement and ‘not a narrow one rooted in past precedents and sliced-up sector by sector’.

But Britain insisted Brussels must tear up its current ‘ideological approach’ if a deal is to be done.

The UK’s chief negotiator David Frost said the ‘major obstacle’ to an agreement is the EU insisting on a ‘level playing field’ provision which would see Britain having to adhere to the bloc’s rules long into the future.

Meanwhile, the EU is also pushing to keep its current access to UK fishing waters, something Mr Frost said is ‘incompatible with our future status as an independent coastal state’.

The fourth round of talks is due to start in June with a senior UK official close to the negotiations describing discussions so far as ‘tetchy’.

The UK and EU are currently in a Brexit ‘standstill’ transition period lasting until the end of the year. Downing Street has repeatedly said it will not agree to an extension of the trade talks deadline.

David Frost (pictured left) and Michel Barnier have now concluded the third round of Brexit trade talks. Mr Frost said ‘very little progress’ had been made in key areas

The transition period was designed to give the two sides time to hammer out the details of their future trading relationship.

The EU said even before coronavirus disruption that it does not believe there is enough time before December to agree a comprehensive deal.

The Brexit divorce accord which took Britain out of the bloc on January 31 allows for a transition extension of up to two years but only if both sides agree before the end of June.

Number 10 is adamant a deal can be done in the current timeframe and is refusing to entertain the prospect of a delay.

But Mr Frost’s assessment today of the talks suggests there is a long way to go before the UK and EU even get close to a deal.

Mr Frost thanked Mr Barnier and his team ‘for their determination in making the talks work in these difficult circumstances’.

But he added: ‘I regret however that we made very little progress towards agreement on the most significant outstanding issues between us.

‘It is very clear that a standard Comprehensive Free Trade Agreement, with other key agreements on issues like law enforcement, civil nuclear, and aviation alongside, all in line with the Political Declaration, could be agreed without major difficulties in the time available.

‘Both sides have tabled full legal texts, there are plenty of precedents, and there is clearly a good understanding between negotiators.

‘The major obstacle to this is the EU’s insistence on including a set of novel and unbalanced proposals on the so-called “level playing field” which would bind this country to EU law or standards, or determine our domestic legal regimes, in a way that is unprecedented in Free Trade Agreements and not envisaged in the Political Declaration.

‘As soon as the EU recognises that we will not conclude an agreement on that basis, we will be able to make progress.’

Mr Frost said there had been ‘useful discussions’ on the issue of fishing but the ‘EU continues to insist on fisheries arrangements and access to UK fishing waters in a way that is incompatible with our future status as an independent coastal state’.

The EU wants to maintain something similar to existing arrangements which grant all member states reciprocal access to each other’s waters.

But Downing Street wants the UK to have the ability to dictate who can fish in British waters, when and how much they can catch, with priority given to domestic boats.

Mr Frost said: ‘We are fully committed to agreeing fishing provisions in line with the Political Declaration, but we cannot agree arrangements that are manifestly unbalanced and against the interests of the UK fishing industry. 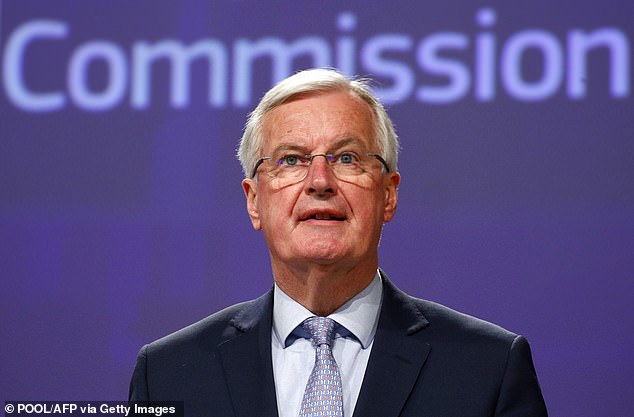 Mr Barnier told a press conference in Brussels today that the EU ‘wants a modern, unprecedented forward-looking agreement, not a narrow one rooted in past precedents and sliced-up sector by sector’

‘It is hard to understand why the EU insists on an ideological approach which makes it more difficult to reach a mutually beneficial agreement.

‘We very much need a change in EU approach for the next Round beginning on 1 June.’

Mr Frost said the UK will next week publish all of its draft legal texts so that EU member states can see Number 10’s approach to the talks in detail.

He said the Government ‘continues to believe that this is possible’ to do a deal by the end of the year.

Mr Barnier told a press conference at the European Commission in Brussels: ‘The agreement we are negotiating will structure our relationship for years to come, decades even.

‘The EU wants a modern, unprecedented forward-looking agreement, not a narrow one rooted in past precedents and sliced-up sector by sector.’

He added: ‘We’re not going to bargain away our values for the benefit of the British economy.’