The bitter Tory civil war over Brexit deepened last night after Theresa May was warned by her own MPs that she faced being booed and ‘slow-handclapped’ at the party conference in protest at her Brussels strategy.

Brexiteers are furious after Philip Hammond’s warning last week that failing to reach a deal would have dire consequences for the economy – and they blame the Prime Minister for failing to rein in the Chancellor.

The news comes as The Mail on Sunday has established that the plans for a no-deal Brexit include ordering hundreds of portable lavatories to be deployed on motorways, to be used by lorry drivers caught in gridlock caused by the reintroduction of EU border checks.

The secret contract is understood to be one of dozens covered by non-disclosure agreements drawn up between the Government and the private sector.

The Tory Party is deeply divided over the level of contingency planning required for a no-deal: Brexiteers believe that ‘doom-mongering’ predictions of economic and logistical chaos after March signal to Brussels negotiators that the UK is prepared to buckle during talks.

Last night, former Brexit Minister David Jones led calls for Mrs May to sack Mr Hammond, telling The Mail on Sunday: ‘She must invite her Chancellor’s resignation and if that is not forthcoming, then she must insist upon it.’

Mr Hammond’s intervention, in which he said a no-deal Brexit could hit growth of the country’s GDP by as much as 10 per cent and cost the economy £80 billion in extra borrowing, came just hours after Brexit Secretary Dominic Raab had suggested it would have only a limited impact.

Tensions are rising in the party ahead of MPs’ return to the Commons next month and Conservative Party Conference, which starts on September 30.

A number of rebel Tory MPs say they have privately urged Boris Johnson to force a no-confidence vote in Mrs May for preparing a ‘botched’ Brexit.

But allies of the former Foreign Secretary, who resigned from the Cabinet last month in protest at the Prime Minister’s Chequers agreement proposing a post-Brexit alignment with many EU rules, say he will not make his move unless the Prime Minister ‘sealed her own fate’ by making further concession to Brussels.

Arch-Brexiteer Tory MP Andrew Bridgen said yesterday that the Prime Minister’s standing was already ‘at an all-time low’ with Tory members over the Chequers ‘sell-out’ and her call on Mr Johnson to apologise for controversial remarks about burkas.

Mr Bridgen said: ‘Her standing has now plummeted even further. It’s becoming increasingly obvious to Conservative supporters that we need a new PM to rescue Brexit, and rescue our country and our party.

‘All right-minded colleagues should put in no-confidence letters now to force out Mrs May.

‘If she somehow manages to cling on, then at the Conservative conference she faces the prospect of real humiliation when she meets the party faithful.’

Mr Bridgen added: ‘She could be the first sitting Tory Prime Minister I can remember who faces a slow-handclap during her speech or doesn’t get a standing ovation at the end of it. I wouldn’t be surprised if she was even booed.’

Mr Jones said that the Prime Minister should dismiss her Chancellor ‘as proof of her good faith in dealing with the party’.

He said that Mr Hammond had not only undermined the Brexit Secretary’s negotiations with Brussels, but was also ‘brazenly defying’ Mrs May’s instruction at last month’s Chequers summit that Cabinet Ministers now had to speak with one voice on the Government’s strategy.

He contrasted Mr Hammond’s behaviour with that of David Davis and Boris Johnson, who quit within days of the Chequers summit as they could not support the agreed approach. ‘As men of principle, they both decided they could not and quickly resigned,’ he said.

‘Mr Hammond clearly has a similar problem in sticking to the agreed Government position and should therefore follow suit.’

Mrs May will face a no-confidence vote if 48 or more Tory rebels submit letters to Sir Graham Brady, chairman of the party’s powerful 1922 backbench committee at Westminster. But yesterday, Sir Graham appeared to offer the beleaguered Prime Minister support, praising her humility as a politician. He said that when it came to achieving a good Brexit, ‘a politician who has as little ego as Theresa May, calmly getting on with it, may be the best chance of achieving that’. 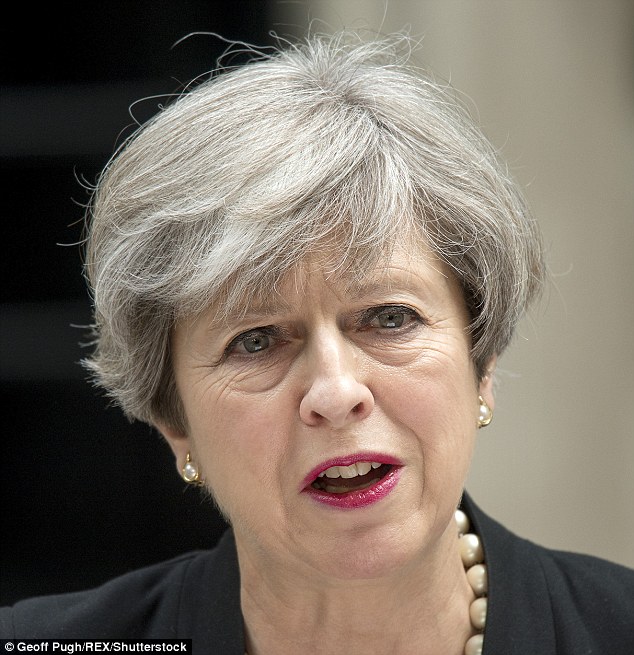 Mrs May’s allies argue that she is the only ‘captain of the ship’ who can navigate the country through the negotiations while holding the warring wings of her party together.

Meanwhile, the ‘Portaloo plan’ is one of a number of secret agreements with companies and industry groups that have arisen as part of a process of consultation with logistics firms.

Much of the planning work has been orchestrated by sub-committees of the Border Co-ordination Group, a cross Whitehall committee of senior officials.

They represent about a third of the 80 or so technical papers that are to be released by the end of next month.

He rejected claims that the Army would have to be brought in to distribute food, but warned of higher credit card charges and online shopping bills, and said that British expats were at risk of losing their pensions and access to their bank accounts.

The prospect of a no-deal outcome has increased since the Chequers proposals were published – with both Brexiteer Tories and Brussels negotiators describing them as unacceptable.

Yesterday, former Tory Minister Nick Boles claimed that a no-deal Brexit would be blocked by at least 40 of his fellow Conservatives in the Commons.

‘I don’t care how many of my colleagues dream of this in the midnight hour. There are not the parliamentary numbers to support a no-deal Brexit,’ he said. ‘And I will vote, as a Conservative MP, in whatever way is necessary, on whatever motion will achieve the result of stopping a no-deal Brexit.’

This would force Mrs May back to the negotiating table – or beg the EU for an emergency extension to the Article 50 deadline at the end of March.

The secret plan to line the M20 with portable lavatories relates to Operation Stack – the procedure used by Kent Police to park lorries when services into the port are disrupted.

The system has been used before, such as when severe weather or industrial action at French ports restricts ferry services.

But in the event of a no-deal scenario – leading to border checks with the EU being reimposed – contingency planners are preparing for a 13-mile-long ‘Brexit stack’ on the southbound carriageway of the motorway.

To allow the drivers to relieve themselves discreetly and hygienically, portable loos would be deployed at intervals along the motorway. As with much of the Government’s no-deal planning, non-disclosure agreements have been signed with the logistics companies which arrange the supply of the loos to try to keep the arrangements secret. 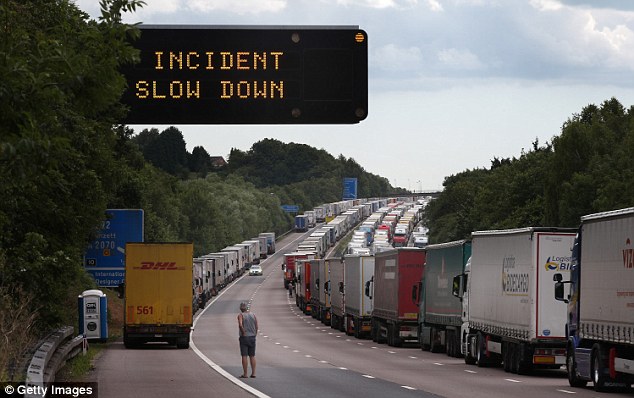 Truck drivers stand next to their vehicles on the M20 during Operation Stack on July 30, 2015