They’ve been going strong ever since they enjoyed a romantic Hawaiian getaway back in December.

And Brian Austin Green and his girlfriend Sharna Burgess looked as affectionate as ever when they were spotted with their hands locked on Tuesday.

The 47-year-old actor and ex to Megan Fox and the 35-year-old Australian dancer were freshly caffeinated after stopping by a Starbucks in Malibu for coffees.

Loved up: Brian Austin Green, 47, and his professional dancer girlfriend Sharna Burgess, 35, were seen holding hands during a run to Starbucks in Malibu on Tuesday

Brian looked rugged for their day out with a plain white T-shirt that showed off his muscular biceps and tattooed forearms.

He paired it with camouflage cargo pants and blue, white and pink trainers while sporting a thick salt-and-pepper beard.

She had a black T-shirt tucked loosely into the front of her shorts and had it pulled down slightly to show off one shoulder. 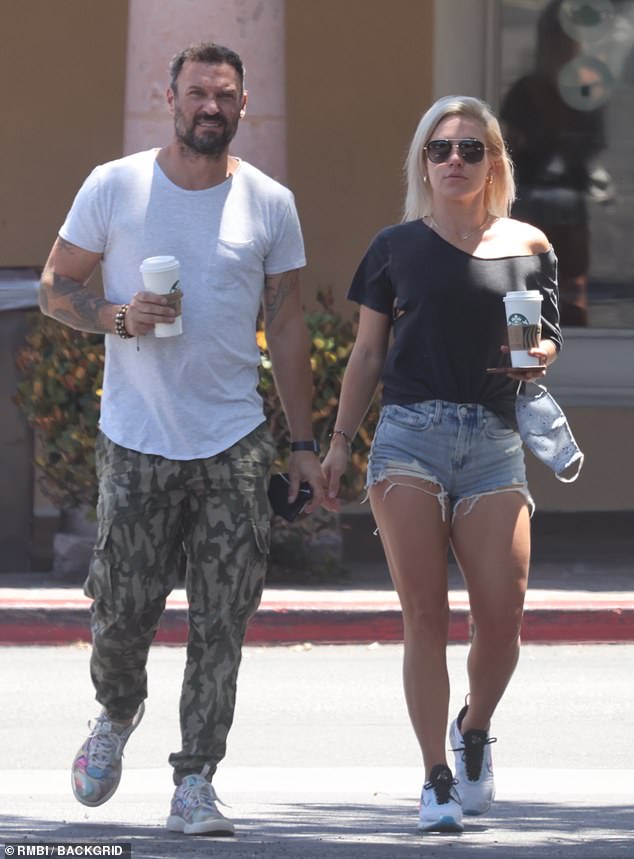 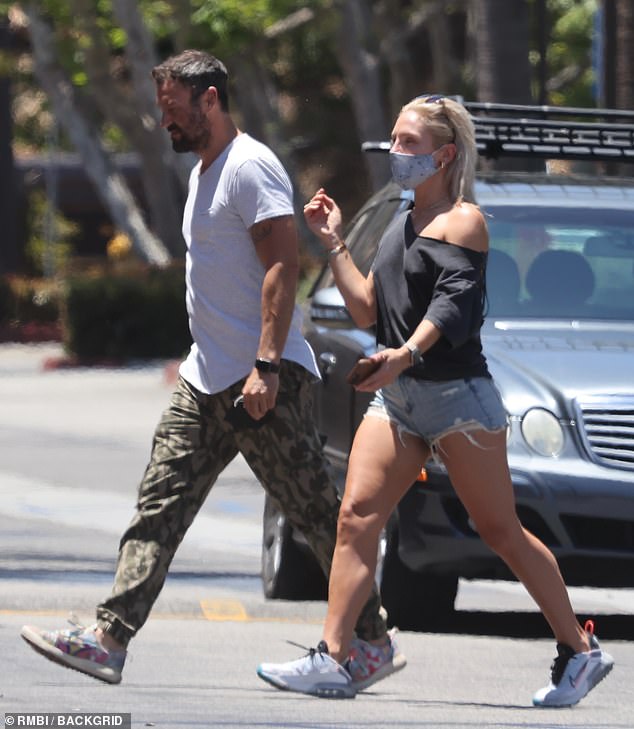 Fit figure: Sharna showed off her dancer’s legs in  cut-off jean shorts while tucking in a black T-shirt that she pulled down to expose one shoulder

The Dancing With The Stars pro wore her platinum blond locks swept back and had on a cool pair of aviator sunglasses.

The couple both brought masks along to wear while inside the coffee shop, though they pulled them off once they were back outside.

The lovebirds appeared to be on their own for their Tuesday outing, but late last month Brian shared a sweet snap of Sharna enjoying some pool time with his three sons, Noah, eight, Bodhi, seven, and Journey, four.

However, the actress claimed on Instagram in 2018 that Kassius had barely seen his father or then-stepmother Megan Fox in years and that his bedroom at their home had been emptied out. 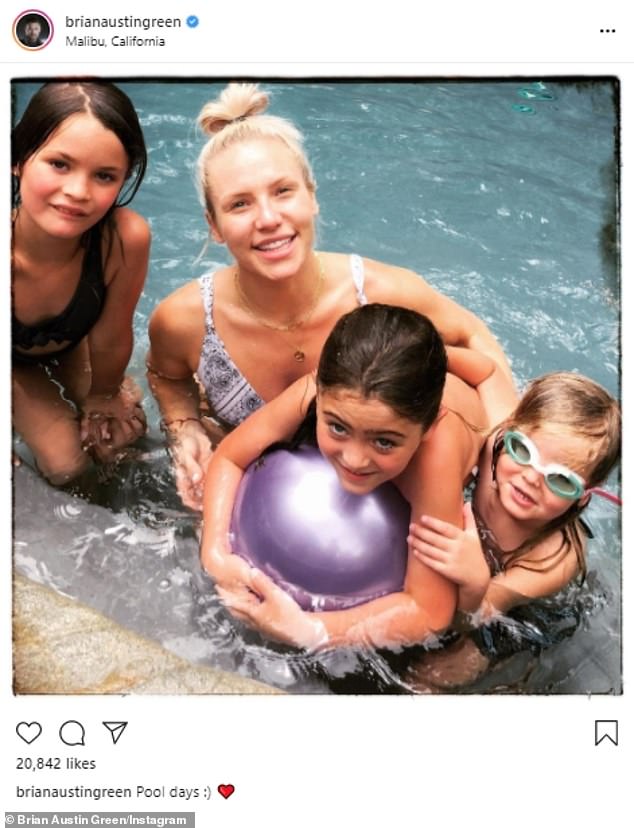 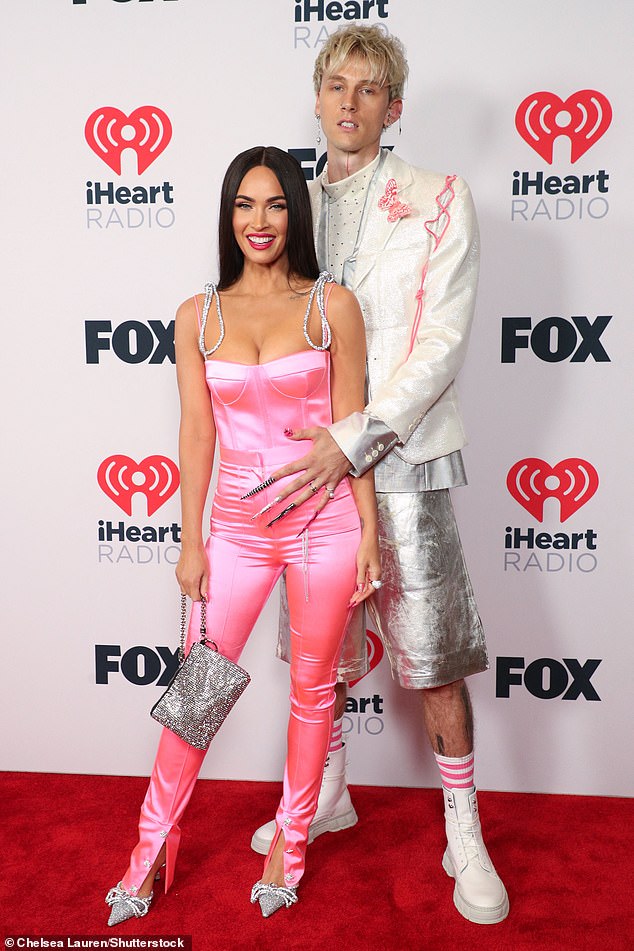 Moving on: He separated from his wife Megan Fox in May 2019 after 10 years of marriage. She’s not dating the rapper Machine Gun Kelly after meeting him on a film set last year; seen May 27 in LA

Brian has had a tumultuous relationship with Megan, which began in 2004 after they met on the set of Hope & Faith when he was 30 and she was only 18.

After breaking off an engagement, they got back together and were married in 2010.

The Transformers actress later filed for divorce in 2015, though they reconciled the following year.

Things ended for good in May of last year, when Brian announced their separation.

Now his ex is coupled up with rapper and rocker Machine Gun Kelly, whom she met on the set of their upcoming crime film Midnight In The Switchgrass, which began filming in Puerto Rico in March 2020, shortly before the pandemic forced a pause of production.

After dating around following the split with multiple women, including the recently engaged Courtney Stodden, Brian went official with Sharna in January, a month after their Hawaiian vacation. 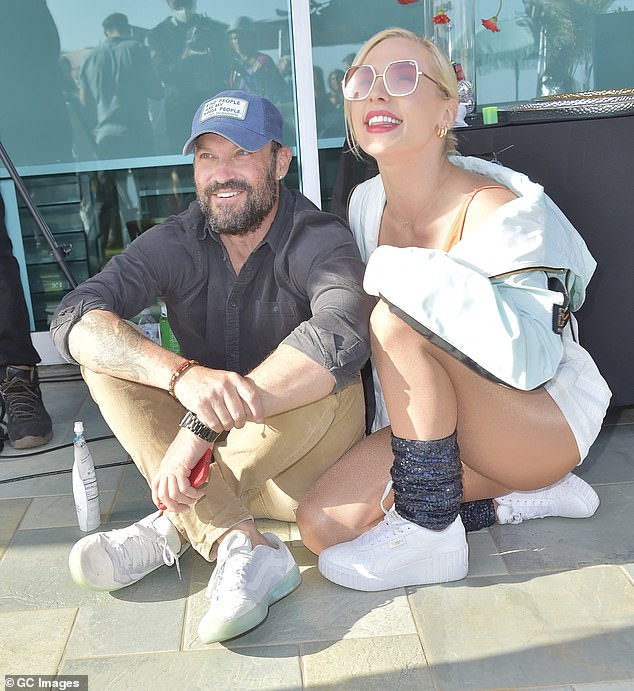 New love: Brian and Sharna were first linked in December when they vacationed in Hawaii, and the couple made it Instagram official the following month