Bride plans £1,320 wedding in less than a year so her sick granddad could walk her down the aisle

A thirfty bride has planned her entire wedding for a bargain price of £1,360 so that her poorly grandad could walk her down the aisle.

Adele Byng, 29, put her dreams of a lavish day on hold to ensure grandad David Hodge, 77, who has Parkinson’s disease, could be there when she tied the knot.

The savvy saver scoured social media for bargains and freebies and planned the celebration in one year to ensure her nuptials with Thomas Byng, 31, a charity shop volunteer, went off without a hitch.

Support worker and mum-of-one Adele, from Portsmouth, said: ‘Thomas and I had been engaged for a while and didn’t see the urgency in getting married.

Adele Byng, 29, pictured with her husband Thomas Byng, 31, planned her wedding day in less than a year and for a bargain price of £1,360 so her granddad could walk her down the aisle 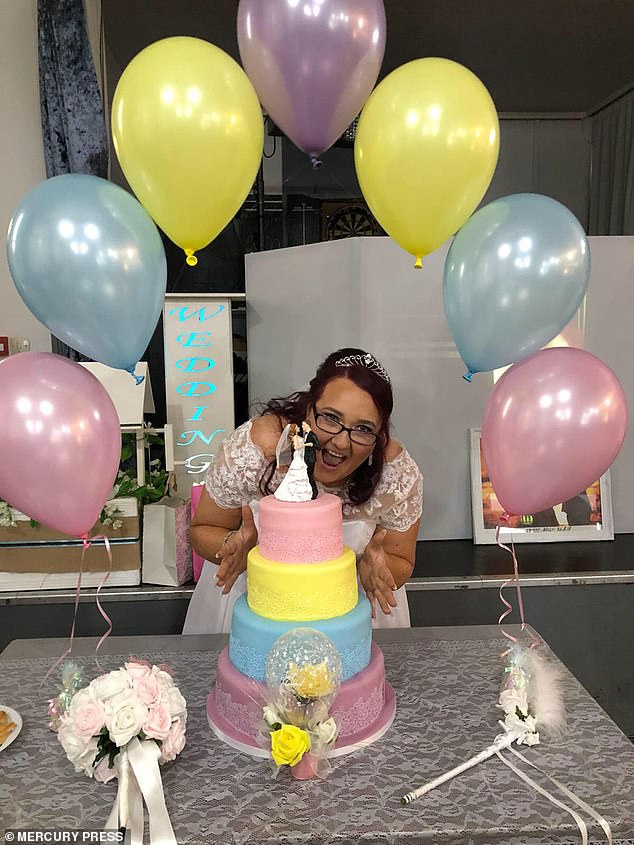 The support worker, pictured with her £120 cake on the big day, found deals online and asked family and friends to help out with the wedding instead of giving gifts

‘In 2017, it became clear my grandad’s mobility was going downhill rapidly. I had always dreamed he would walk me down the aisle, so we decided to make the wedding a bit more DIY and keep it low cost so that my grandad could be a part of the day.

‘Everybody knew what the day meant to us. To have my grandad be able to walk me down the aisle absolutely made my day and there was a lot of tears from everyone.

‘We never planned to do a “budget” wedding, as the word is portrayed as cheap and some even said my wedding would be chavvy, but I can honestly say hand on heart it was amazing.

‘Everybody who came commented on how relaxed it was, and not having to adhere to timings meant everything was heartfelt.’ 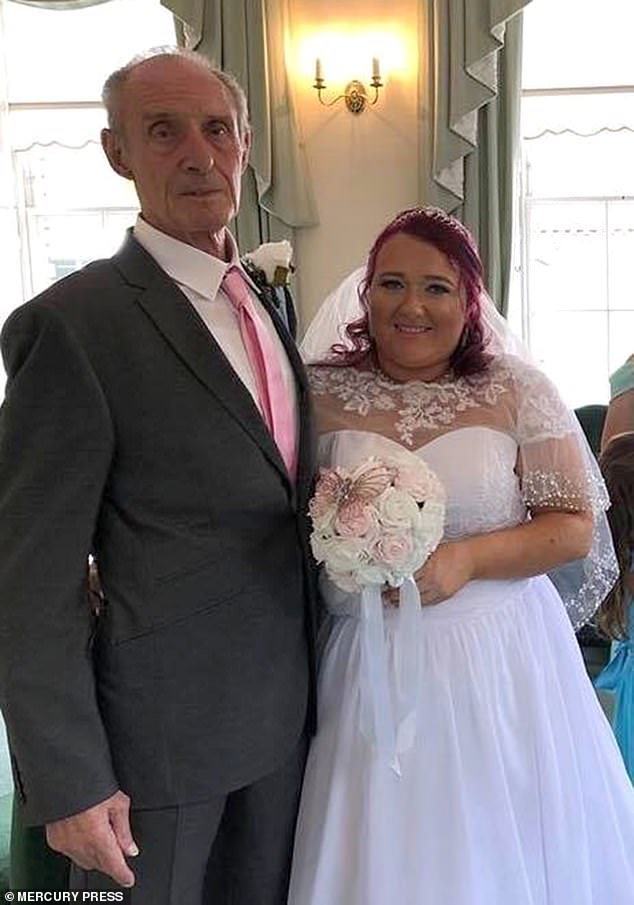 Adele, pictured with her granddad David Hodge, 77, who has Parkinson’s disease, had always dreamed of him walking her down the aisle. In 2017 his mobility started to go downhill rapidly 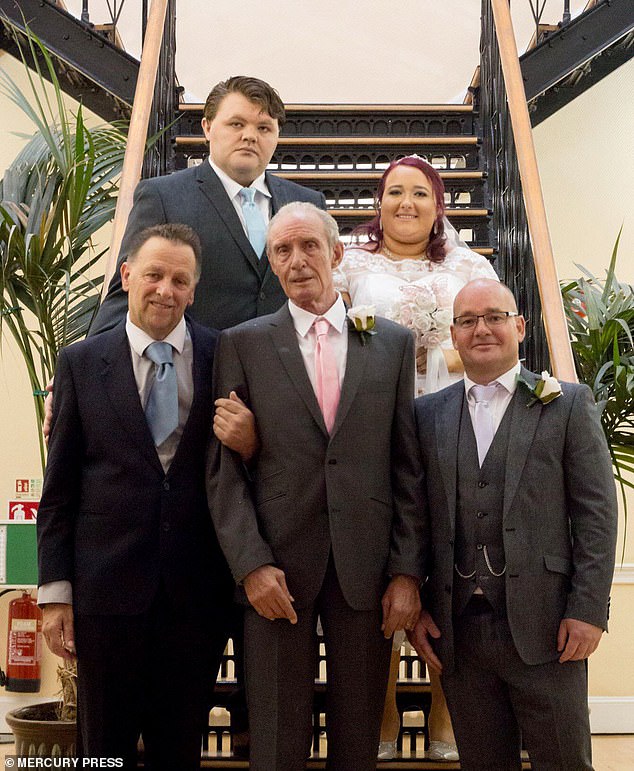 The entire wedding cost £1,360 with Adele spending only £45 on her own dress and £150 on the reception. Pictured is the bride and groom, back row, granddad David, centre, Adele’s father Gethin Jones, right, and another family member, left

Adele said that originally she had planned ‘on a nice medium budget wedding costing a few thousand’.

She went on: ‘As we didn’t have a large income each month and I was only working part time in a supermarket, we knew we couldn’t do the stately home or lavish wedding we had originally dreamed of.’

What did Adele spend?

When David, who was diagnosed with Parkinson’s disease in 2008, became more seriously ill, the couple realised having him there and able to walk alongside her was the most important thing.

Determined to organise the bash last August within a year, Adele used social media and budget websites to find cheaper options and paid off small amounts towards the wedding each month.

The mum-of-one also reconnected with an old school friend who now works as a make-up artist and asked family friends to help with the food, photographs and decorations instead of giving the newlyweds wedding gifts.

Adele had a pastel theme rather than one colour scheme so she was not restricted by colour price differences, and managed to snap up her wedding dress for £45 on eBay after weeks of searching for the right style.

The mum, who tied the knot at her local registry office before partying at a nearby working men’s club, is now encouraging brides to do the same as her as she feels DIY weddings are more thoughtful.

Adele said: ‘I joined groups on Facebook especially for weddings and brides, and I put out posts detailing what I was looking for so I could get recommendations and then find the best suitable price for us. 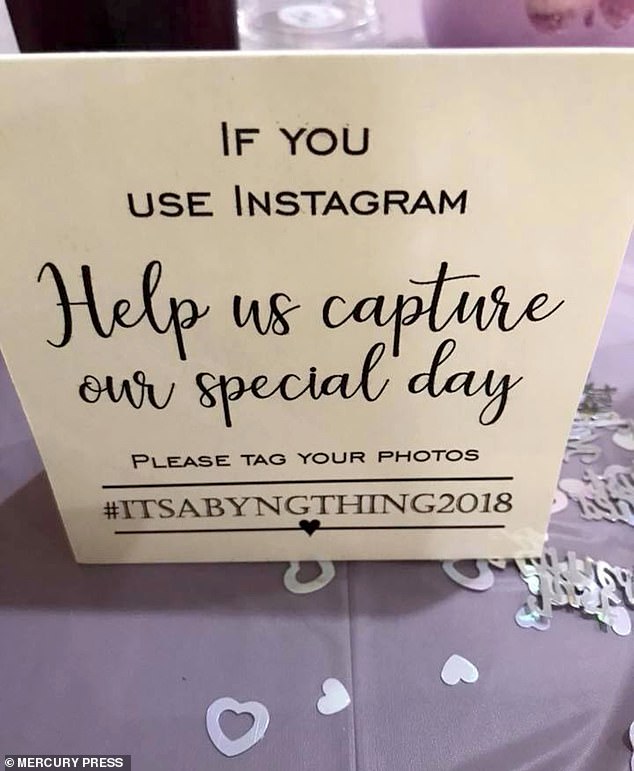 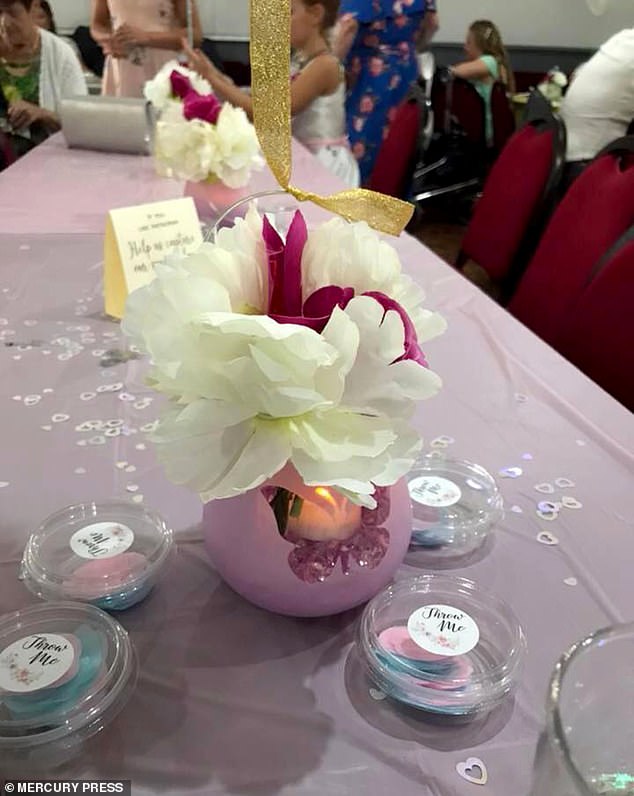 Mother-of-one Adele tied the knot at her local registry office and held the reception at a working men’s club for £150. She’s now encouraging others to have DIY weddings as well

‘By using the recommendation tool on my own personal Facebook I managed to find my make-up artist in an old school friend who I hadn’t spoken to in years and had no idea she did make-up, meaning it didn’t cost much at all.

‘Websites like eBay, Amazon and Wish were my best friend while planning the wedding, getting the table decorations from them our bridesmaids dresses and even my own wedding dress.

‘I would 100 per cent recommend other couples to do it because it’s just all from the heart, and everyone said how relaxed and lovely the day and evening was compared to some at stately homes that they had been in, which can be quite constricted with time.’ 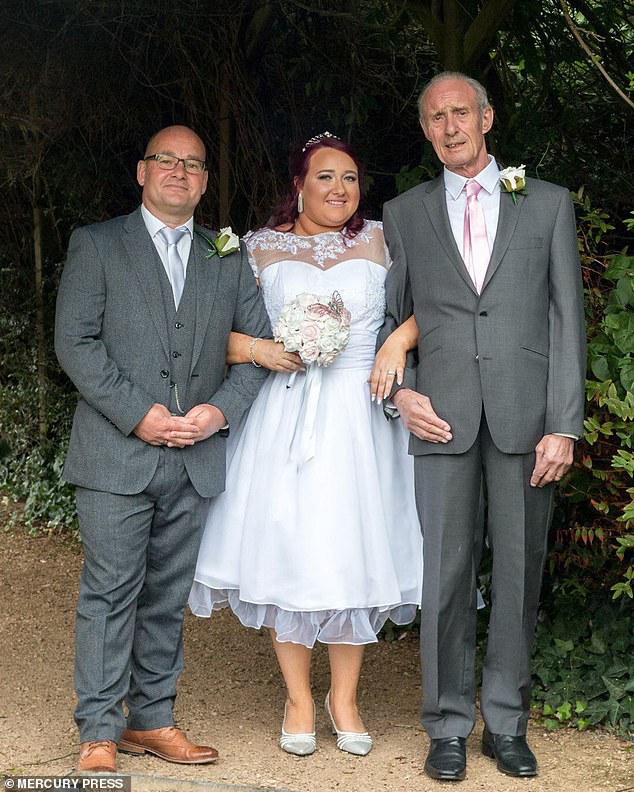 Adele, pictured inbetween her father Gethin, left, and granddad David, right, said websites like eBay, Amazon and Wish were useful for getting ideas and bargains for the wedding 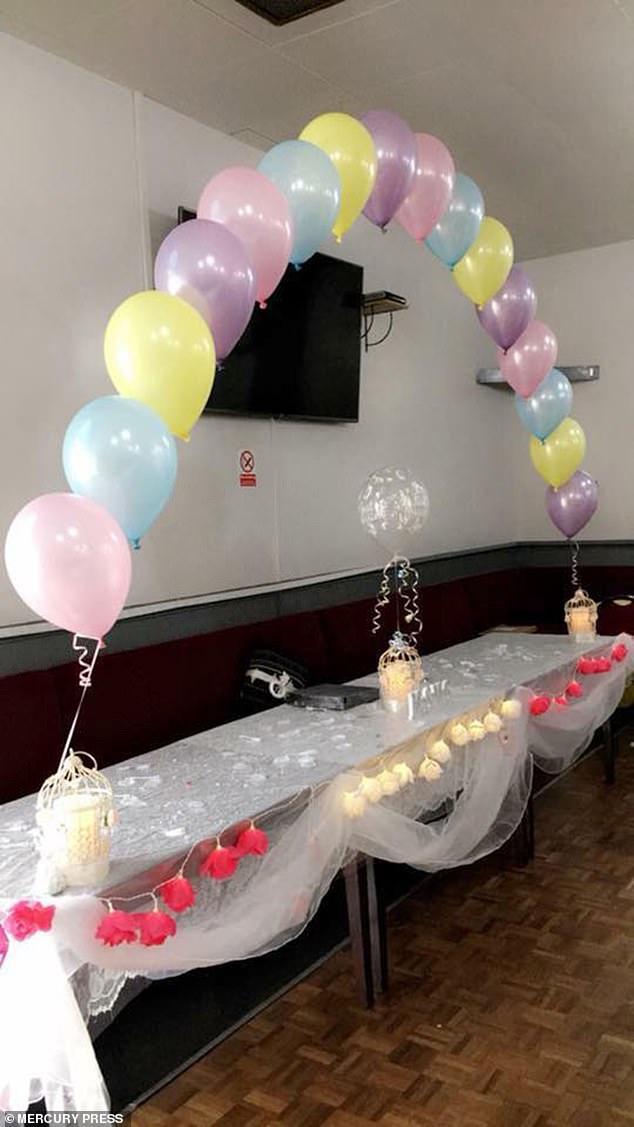 Adele had a pastel theme rather than one colour scheme so she was not restricted by colour price differences. Pictured are her home made table decorations 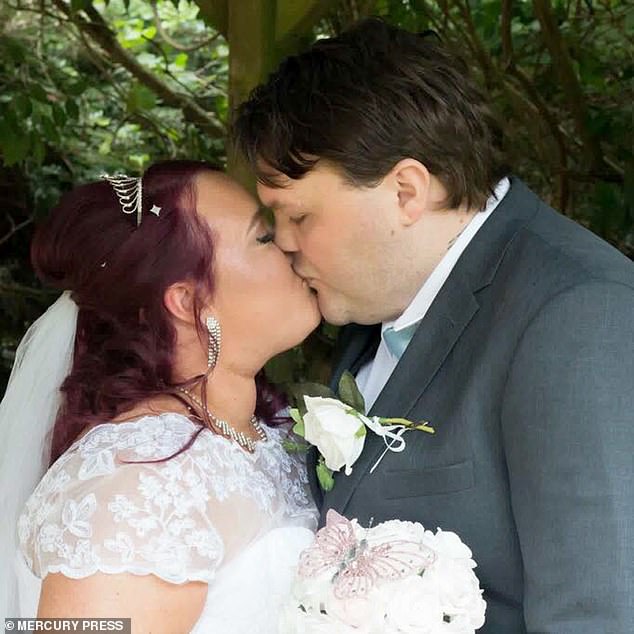 Adele said there was ‘a lot of tears from everyone’ on her wedding day. She is pictured with new husband Thomas

Adele said she and her grandparents have always been close, with David taking on a father role while she was growing up.

She added: ‘I always wanted my grandad to walk me down the aisle, along with my dad the other side, due to him being my primary dad figure growing up.

‘His nickname from me is “grumpy gramps” and I just adore him really.

‘He isn’t an overly affectionate man, hence the nickname, but he has a wicked sense of humour and is so thankful for all I do for him and my nan.

‘Making him such a central part of my wedding was just me paying back what they have done for me growing up.’