Bride says she won’t invite her sister’s new partner to the wedding – so who is in the wrong?

Bride sparks a family debate after refusing to invite her sister’s new boyfriend of three months to her wedding – so who is in the wrong?

A bride-to-b’s her decision not to invite her sister’s boyfriend to her scaled-down wedding has caused a family rift.

The bride posted on Facebook to ask who is in the wrong after she told her sister her boyfriend of three months couldn’t attend the big day.

The wedding, which is in four weeks, has already been scaled down because of new capacity limits brought in by the venue.

The bride went on to explain the boyfriend could come after the main event but there was no space to have him during the day as well.

But her sister was furious when she heard the decision.

‘She is now saying that if he can’t come, then she’s not going to come. How do I respond to this maturely?’ the bride asked in her post.

And while some sympathised with the bride – many said she was in the wrong or made snarky comments about her decision.

‘Just send her a quick note that says: “Hey sis, It’s super essential Carol from Accounting comes to my wedding so sorry but that means no plus ones for fam. If you feel bored just head to table six where you can hang out with my 10 girlfriends from high school that I haven’t seen in five years, you know them all,’ before signing off with ‘love bridezilla’.

Should the bride let her sister’s boyfriend come to the wedding?

Others said a sibling should always be given a plus one at a wedding, even if they have not been dating their partner for very long.

‘Maybe you could arrange to meet him at a dinner before your wedding, then you will feel more comfortable having him there,’ suggested one woman.

One woman stuck up for the younger sister despite predicting she probably wouldn’t be with the man long-term.

The woman, who has three siblings, said none of the plus ones are still part of the family.

‘What I’m saying is no matter how long they have been together or if you know them or not they are important at the time and need to be invited the only way around this is a registry wedding or family alienation,’ she added.

But some people were on the bride’s side and said it was ultimately up to her who was invited. 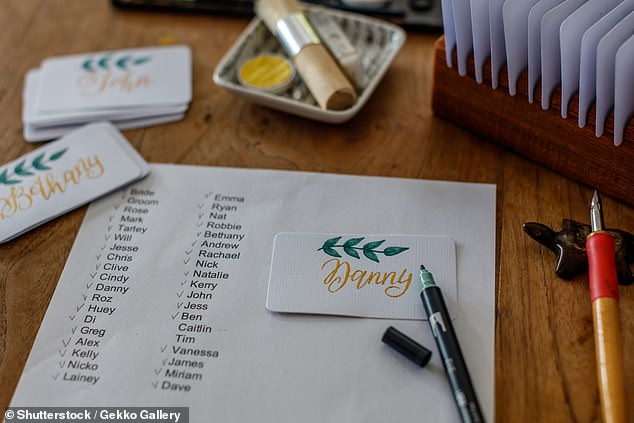 The wedding, which is in four weeks, has already been scaled down because of new capacity limits brought in by the venue

‘You have already been generous and offered her a compromise. If he was so important to her when has she not made the effort for him to meet you and the rest of the family before the wedding,’ one woman said.

‘Don’t give in just to appease your sister,’ another said.

Old-school wedding etiquette implies if someone has been with their partner for 12 months then they should expect to have them as a plus one.

Other old rules say if the couple getting married have never met the plus-one then they aren’t expected to include them in their day.