By Aidan Wondracz and Lauren Ferri For Daily Mail Australia

Wild weather has thrown Queensland airports into chaos with a number of flights to Sydney and Melbourne cancelled.

Jetstar, Virgin and Qantas passengers have been left stranded at Brisbane Airport and Gold Coast airports as the airlines have cancelled some of their inbound and outbound flights.

Kingsford Smith Airport in Sydney is currently only operating one runway as 61km/h winds are recorded in the area, Courier Mail reported.

Already wind gusts of 115km/h have been recorded at places like Thredbo in south-west NSW.

‘This front is forecast to cross the state later tonight and during Saturday.’

‘Winds are expected to ease later on Saturday following the passage of the front.’

State Emergency Services (SES) advises people to move vehicles under cover or away from trees and secure loose items around the house.

‘The NSW National Parks and Wildlife Service recommends that back country travel be postponed until conditions improve,’ BOM warned.

The cold front comes after vicious winds caused a tree to fall in the Blue Mountains suburb of Katoomba on Thursday night.

Mother-of-four Dearne Fulcher, 50, was being driven by her son Dylan when the tree struck their Volvo, on Victoria Street at about 7pm.

Ms Fulcher was killed while Dylan, 20, suffered horrific injuries and was flown to Westmead Hospital, in Sydney’s west.

Another three people are dead and two were rescued when a yacht sank off Newcastle on Thursday.

A catamaran with five on board capsized in rough seas 13km from Stockton Beach at about 10am.

Marine rescue volunteers and a Westpac helicopter raced to an emergency signal and found a 40-year-old man and a 16-year-old girl clinging to the sinking boat.

Paramedics winched them to safety as rescuers found three adults dead in the water at the chaotic and ‘very confronting’ scene.

The man and the girl were taken to John Hunter Hospital where they are being treated for hypothermia. 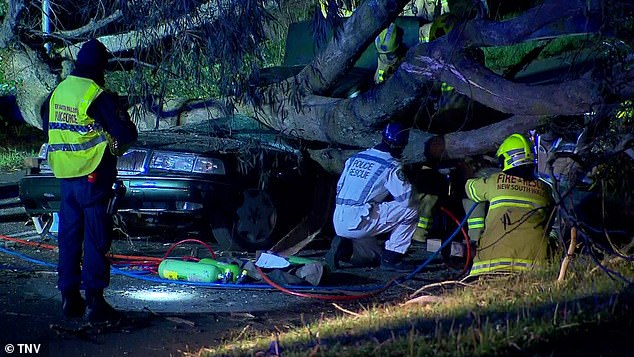 Mother-of-four Dearne Fulcher, 50, was being driven by her son Dylan when the tree struck their Volvo, on Victoria Street at about 7pm. Ms Fulcher was killed and Dylan was rushed to hospital