Brisbane boy struck down with flu is left deaf for life

A young boy who has been left permanently deaf from an aggressive strain of flu will finally leave hospital on Friday after a three-week battle with the virus.

Kynan Meara-Fletcher, seven, from Queensland’s Glenore Grove, was struck down by Influenza A, then subsequently sepsis, meningitis, sinusitis and a blood clot on the brain.

At one point, the Year 2 student was transferred to intensive care, at Brisbane’s Lady Cilento Hospital, where he was treated for his illnesses for four days.

The boy’s mother, Michelle, was left distraught at the thought of her son not being able to hear her tell him she loved him.

Kynan Meara-Fletcher (above) was left permanently deaf after an aggressive strain of influenza savaged his body, leading him to suffer meningitis, sinusitis and a blood clot on the brain

‘All I could think of was, he is not going to hear me say, “I love you” because we are a very kissy, cuddly, affectionate family,’ she told Courier Mail.

‘I kiss my boys all the time so it was a bit of a shock.’

Kynan underwent surgery on Wednesday to have cochlear implants—a device that replaces the function of the inner ear to send signals to the brain— fitted inside his ears.

If his appetite is anything to go by, it seems Kynan is well on his way to recovery, with his first post-operation words used to request that his mother cook him a steak.

‘I said to my husband, “I think we might have to go for a counter lunch somewhere tomorrow on the way home and get him that steak”,’ Mrs Meara-Fletcher said on Thursday. 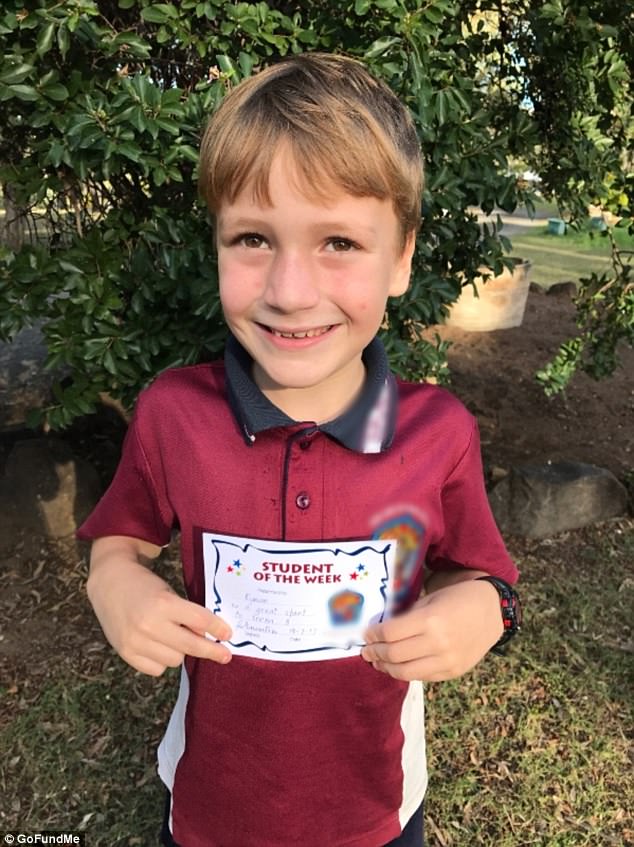 His mother, Michelle, was distraught at the possibility of her son not being able to hear her telling him she loved him—fortunately, he was fitted with cochlear implants on Wednesday

The family-of-five have established a GoFundMe account to help pay for ongoing medical expenses, which has so far raised more than $6000.

The page describes Kynan as soccer-mad Brisbane Roar supporter who is ‘the light of his family’.

‘Kynan will need four months of treatment to hopefully dissolve the clot that has formed on his brain. He has had numerous tests, scans, operations and needles, with lots more to come,’ the page says.

‘We would be so grateful for any help for these continuing expenses, anything is very much appreciated.’ 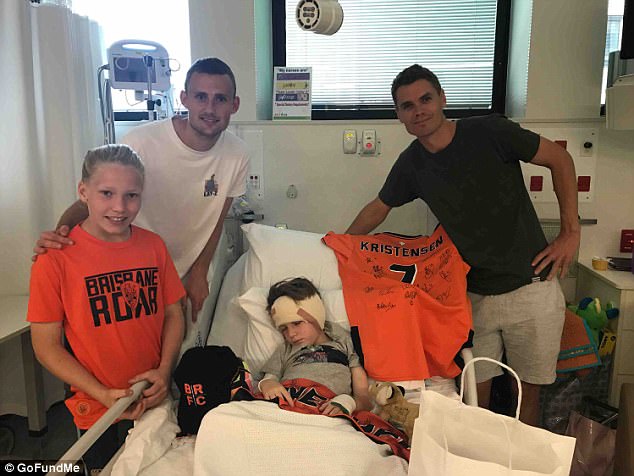 The family-of-five have established a GoFundMe account to help pay for ongoing medical expenses, which has so far raised more than $6000