The British skiers who fell to his death with his close friend in the French Alps has been named.

The group, all from Cambridge, were on holiday in Chamonix-Mont-Blanc and skiing off-piste when two the two fell ‘several 100 metres’, according to police.

A British skier witnessed an accident in which his younger brother and friend fell to their deaths while skiing in the French Alps, it has emerged (file picture)

He raised the alarm with the piste patrollers at about 11.40am on Sunday before mountain police were called.

The group had been skiing at an altitude of 1700 metres, and the weather was clear and sunny.

They were making their way down the mountain when the first skier fell sharply. While the second skier went to help him, the third skier, further back, also tumbled suddenly and fell to his death down icy, rocky terrain with compacted, hard snow.

A local source said: ‘The boys were on holiday with Inghams. Everyone there is in complete and utter shock. This is such a tragic accident. The British consulate has been here helping with everything.’

A spokeswoman for Inghams said: ‘We are working closely with local authorities in Chamonix, France, and the British Consulate, following the fatal accident involving two skiers on Sunday 28th January 2018. Our thoughts are with the family and friends of our guests at this difficult time.’

According to police, there was evidence that other skiers had been on the slope in previous days.

The two men fell independently of each other as they skied the 40-degree slope and died instantly.

The bodies of the two skiers were retrieved from the mountain by helicopter. Police have opened an investigation into the tragedy and are questioning the third member of the group.

A local police spokesman said: ‘Three British men were skiing Le Couloir Du Chapeau. It is a steep off-piste area. The snow at the moment is very hard, it is not powder skiing. The conditions in the couloir are not good.

‘The two men fell one after the other. They fell independently but within a couple of minutes of each other.

‘They fell several hundred metres. For sure these men were good skiers but the conditions are not good. An investigation has been opened into the accident.’

The area is popular with off-piste skiers and is easily accessible from the lifts of Grands Montets. 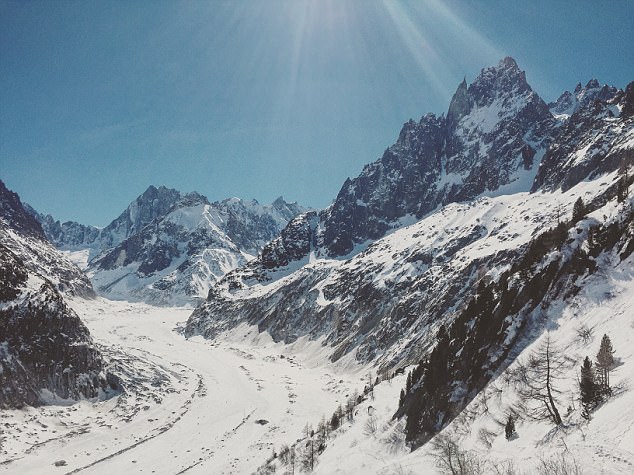 The group, all from Cambridge, were on holiday in Chamonix-Mont-Blanc and skiing off-piste when two of them, both aged 26, fell ‘several 100 metres’, according to police (file photo shows the Mer de Glace glacier in Chamonix)

Conditions are particularly unfavourable at the moment and mountain experts are warning skiers to exercise the utmost caution if considering venturing off-piste.

Chamonix is a French resort on the border of Italy and Switzerland. Sitting at the foot of Mont Blanc, it is one of the most famous ski areas in the world.

Grands Montets is a mecca for advanced snowsport enthusiasts, offering the valley’s most advanced terrain.

Stuart Macdonald, a British IFMGA mountain guide based in Chamonix, said: ‘This is an extremely serious couloir to ski at any time because there is a cliff at the bottom that you need to exit beforehand and it is a 45-degree slope. This is extreme skiing in any conditions, let alone yesterday’s.

‘It is west-facing and relatively low in altitude and the past week we have had plenty of sun and no fresh snow. All these factors mean I would not have skied that couloir (on Sunday).

‘To descend this couloir, the snow would have to be either grippy snow or powder but not poor quality snow with irregularities like (on Sunday).

‘Conditions are great in certain off-piste areas in Chamonix at the moment but certainly not good on a 45-degree couloir that has been getting lots of sunshine and may well have been very icy.

‘They may have seen tracks in the snow that they then followed but in Chamonix, in particular, you could well be following a world-class skier.’