A British teenager has told of his horror after hiding in a storage cupboard for two hours while his friends were shot dead during a Florida high school massacre.

The 17-year-old Brit said he hid in a storage cupboard with about 20 students for two hours during the massacre where 17 people were murdered.

‘It’s a nightmare come to life’: Lewis Mizen, pictured above speaking to the BBC after the shooting on Wednesday, hid in a cupboard for two hours during the massacre

Tragically, Lewis said one of his close friends was killed during the attack.  He told the BBC: ‘It’s a nightmare come to life.’

Police said 19-year-old Cruz set off a fire alarm at the school so people would leave the classrooms and pour into the corridors, before he opened fire.

Lewis told the BBC he thought it was a fire drill.

When school administrators started screaming ‘code red, get back in the building’, Lewis and his classmates ran back to their classroom with their teacher where they ‘huddled under the desks’ before moving into a storage cupboard.

‘We didn’t hear the bullets, but we heard the helicopters,’ he said. ‘We knew at that point it was something really serious.’ 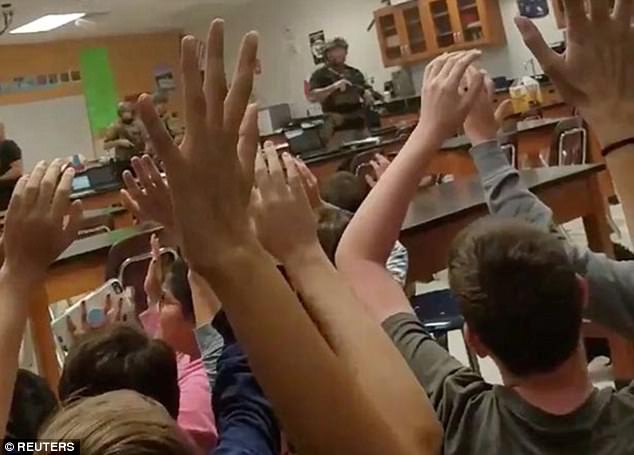 Students put their hands up in the air as armed police enter their classroom, following a shooting at the Marjory Stoneman Douglas High School in Parkland, Florida

The high school student said he and his classmates ‘were all on our phones’ as they hid.

‘I had people standing next to me watching CNN live trying to figure out what’s going on,’ he said.

‘It’s one of those things you see on the news and think that will never happen to you, but it has.

Mr Cruz has appeared in court charged with 17 counts of premeditated murder and has confessed to the shooting, police say.