Britain at its best: Discovering the delights of Hull, a great British city for pubs

Britain at its best: Discovering the delights of Hull, a great British city for pubs, gourmet burgers and sensational seafood

The unofficial Bard of Hull — the man who famously stated that ‘deprivation is for me what daffodils were for Wordsworth’ — put it this way: ‘When your train comes to rest at Paragon Station against a row of docile buffers, you alight with an end-of-the-line sense of freedom.’

As it happens, the city will be celebrating Philip Larkin’s centenary next year and, fittingly, the Larkin Trail is a detailed but accessible tour around the city.

Along the self-guided route I find plaques, designed to look like Victorian circus posters, which reveal the relevance of places as diverse as the (now shuttered) Marks & Spencer and the dour-looking Royal Station Hotel (immortalised in a 1967 poem where Larkin writes of ‘silence laid like carpet’ and ‘all the salesmen . . . gone back to Leeds’).

City with soul: Queen Victoria Square in Hull. It was UK City of Culture in 2017

The Humber Estuary here feels as wide as the Mississippi, the softly green-tinged waters churning boisterously out into the frigid North Sea beyond.

The vast skies, pockmarked with iceberg clouds, have an American Midwest endlessness to them. On ground level, though, this is a city that, especially around the narrow, cobbled, original High Street, has a cosy, red-brick warmth to it.

In 1955, Larkin — already a recognised literary figure from his early novels and two collections of poetry, The North Ship and The Less Deceived — moved to Hull to become a librarian at the university, a post he would hold until his death 30 years later.

He enjoyed a drink and Hull is a great British city for pubs. Each seems to have a unique look to it, from the racing green, Art Nouveau-tiled, horseshoe bar of The White Hart on Alfred Gelder Street to the heraldic crests and narrow passageways of Ye Olde Black Boy on the old High Street, where Larkin gave talks on jazz music in the 1970s.

My favourite is The Minerva, a solid, Victorian behemoth situated on a corner overlooking the estuary. Curved to give a maritime feel to the exterior, this is the kind of pub where real ales are barely £3 a pint, dogs snore under bar stools and strangers ask if you’re wearing enough layers for the walk home.

There is a surprisingly international feel to this city, too, enhanced by its year as UK City of Culture in 2017 — though the roots stretch back much further; there were Dutch and Danish embassies here until relatively recently to deal with the mercantile business from the docks. 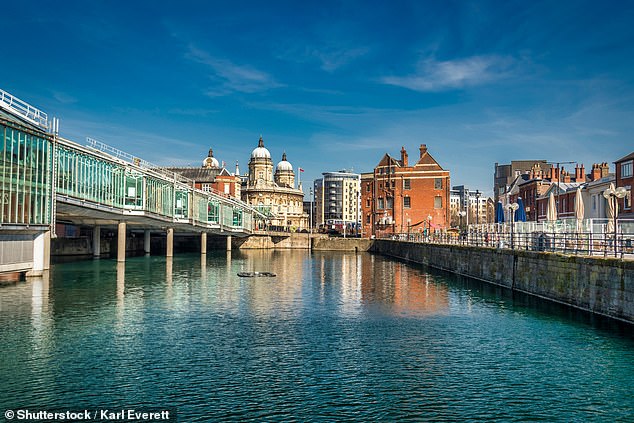 The Daily Mail’s Rob Crossan says there is a ‘surprisingly international’ feel to Hull, pictured 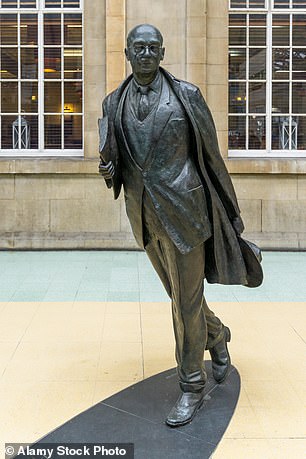 Hull’s statue of the poet Philip Larkin. The city will be celebrating his centenary next year

The food scene has a similar outward-looking feel to it, particularly around the former fruit market and old marina, now housing sublime tapas at Ambiente, gourmet burgers with Wagyu beef and cheeseburger spring rolls (possibly the most glorious guilty pleasure on any menu in the north of England) at Solita and heaving plates of monkfish, lobster and oysters at the Humber Fish Co.

But the shadow of Larkin is never far away. On my final morning, I walk deep into silent, leaf-strewn suburbia to find 105 Newland Park, Larkin’s final home.

Neat and anonymous, it appears to be the antithesis of what Larkin represented. But on the upstairs balcony is a huge ceramic toad.

Gazing out on to the deserted road below, it’s a reference on behalf of the current owners to one of Larkin’s famed poems, Toads, where, in a rage against the tyranny of the nine-to-five existence, he asks why he ‘can’t drive the brute off with a pitchfork’.

Just like Larkin himself, Hull is a place whose reputation belies a wonderfully quirky and unique soul — to which those vast skies, gargantuan portions and giant ceramic toads all attest.