Britain at its best: Italy? No, it’s Portmeirion in Wales

This is where Noel Coward wrote his popular play, Blithe Spirit, in just six days,’ says Meurig Jones, pointing to the ochre-coloured building glowing in the morning sun.

‘And over there,’ he gestures towards a cosy, single-storey house perched precariously atop a steep rock face, ‘is where George Harrison wanted to celebrate his 50th, but his security team, fearing he’d get drunk, felt the balcony walls were too low.’

Meurig is guiding us around Portmeirion, an enchanting Italianate village snuggled against a rocky headland in North Wales.

The brainchild of architect Clough Williams-Ellis, this alluring cluster of pastel-coloured buildings attracts hundreds of thousands of visitors every year. Like us, many wandering along the twisting paths will recall the pretty coastal setting as the backdrop to iconic Sixties spy series The Prisoner, starring Patrick McGoohan.

Continuing our tour in Meurig’s battery-operated golf buggy, he regales us with stories of how musician Jerry Lee Lewis required a door frame here to be removed to accommodate his grand piano, while Jools Holland designed his recording studio in homage to the village’s architecture.

Williams-Ellis discovered the site in 1925, borrowed £5,000 and began creating his dream village, proving that development needn’t defile a splendid setting. He achieved his goal of encapsulating the beauty and intimacy of coastal villages in southern Europe, particularly Portofino in Italy.

At Hotel Portmeirion, where we lunch in its award-winning art deco curvilinear restaurant, Williams-Ellis used every opportunity to exploit the incredible views. From our table, we look out across the River Dwyryd to lush green fields beyond, their colours intensified by the midday sun.

Gradually, the estuary becomes peppered with sandbanks as the water slips into the sea.

Feeling replete, we stroll around the village, noticing how columns, pillars, pediments and archways are used to emphasise height or to guide the eye towards an unmissable sea or mountain view.

Williams-Ellis adopted the same philosophy when remodelling his nearby ancestral home, Plas Brondanw, and its Grade I- listed gardens. Appreciating the beauty circling his home, he used structures and paths to focus the mind on the distant craggy peaks, including mighty Snowdon.

While numerous buildings in Portmeirion were designed by Williams-Ellis, others were rescued from demolition and brought to this corner of Snowdonia, which the architect jokingly christened ‘a home for fallen buildings’. 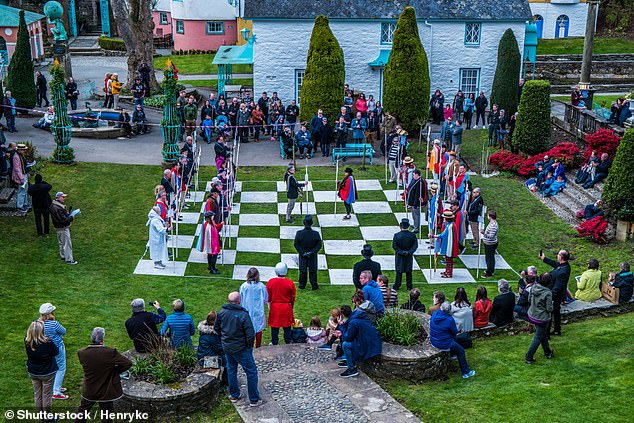 The cluster of pastel-coloured buildings attracts huge numbers of visitors

For us, the village symbolises the acme of his career. This mix of colours, shapes and designs might contrast starkly with the surrounding architecture, but that’s what makes it one of the most magical places we’ve visited.

Brushed by the Gulf Stream, the area’s mild climate encourages the growth of exotic plants, which blanket this tongue of land.

We amble along woodland tracks edged by azaleas, hydrangeas and towering rhododendron trees, reaching more than 40 ft into the clear blue sky. More than 120 years old, these mighty specimens’ branches have become so entwined it’s easy to see why this patch of the 70-acre sub-tropical forest is nicknamed Tangle Wood.

At the Japanese Garden, we stop momentarily to admire the lily-covered lake, before reaching the Gazebo, designed by the architect’s daughter to mark the centenary of his birth. It affords us a spectacular bird’s-eye view of the village.

Today, Portmeirion is run by a charity, set up by Williams-Ellis in 1972 to secure its future.

As for the architect himself, well, he made his mark in life and in death. He died in 1978, aged 94, and had his ashes packed into a rocket and fired into the sky above his masterpiece.