Britain at its best: Thomas Gainsborough’s birthplace of Suffolk is as pretty as a picture

Britain at its best: Thomas Gainsborough’s birthplace of Suffolk is as pretty as a picture

Walk down Market Hill in Sudbury and you could be back in 1727 — the year the town’s most famous son, Thomas Gainsborough, was born.

The painter would recognise the splendid medieval churches of Sudbury: St Gregory, St Peter and All Saints.

He would know the 16th-century, half-timbered Black Boy Hotel — and surely love its ales brewed by Greene King.

Most of all, he would recognise the house where he was born — now called Gainsborough’s House, on Gainsborough Street.

His house is one of Britain’s most charming museums. If you missed the recent Gainsborough show at the National Portrait Gallery, even more reason to visit his birthplace.

From the outside, the grand, red-brick house looks much as it did in his youth — he lived there till 1740, before being sent to London to study art. The late medieval building was given its lovely facade by the artist’s father soon after he bought it in 1722.

The classic, panelled rooms follow themes in Gainsborough’s life. Downstairs, you get a good introduction to his life story.

Upstairs, you’ll find a fine selection of his pictures, among them some of his portraits, which he called ‘The curs’d face business’ as it kept him from his landscapes.

Before you leave Sudbury, track down his bronze statue, paintbrush and palette in hand, on Market Hill. Then head into the beauties of rural Suffolk, remarkably unchanged since Gainsborough died in 1788.

Look out for landscapes that are uncannily like the background of Gainsborough’s Mr and Mrs Andrews, now in the National Gallery. 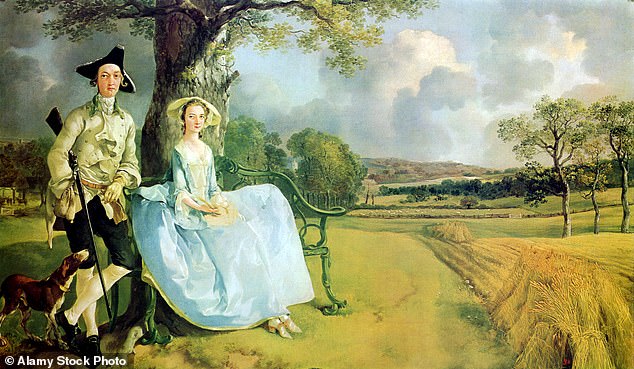 Gainsborough’s painting Mr and Mrs Andrews. The landscapes around Suffolk are uncannily like the background of this painting

Gainsborough returned to Sudbury in 1749, with his wife, Margaret Burr, an illegitimate daughter of the Duke of Beaufort. It’s thought he painted Mr and Mrs Andrews a year later. Take a trip to Long Melford, which has Holy Trinity — one of the greatest churches in the country, a vast, stately, medieval building, towering over Melford Green.

Just a ten-minute walk away lies the National Trust’s Melford Hall, an Elizabethan brick pile on the outside — all pepperpot towers and leaded windows. On the inside, it has a delicate, Georgian, classical style.

The prettiest village is Lavenham. In the shadow of the flint tower of St Peter and St Paul’s Church is the finest row of timber-framed houses in Suffolk. Keep an eye out across the county for lovely, pink plasterwork — in medieval times a dash of oxblood was added for colour.

Then there’s my favourite Suffolk village of Stoke-by-Nayland, with its secondhand bookshop, village shop, 15th-century church and two pubs, the Angel Inn and the Crown Inn.

And the best thing? The Crown has wonderful views of Gainsborough country, which are free.