Britain is facing an invasion of swarms of deadly Asian hornets that can kill with just one sting.

Fears are mounting the killer insects could be on its way to the UK after large numbers have been spotted on Jersey in the Channel Islands.

Experts say the recent wet weather could send numbers spiralling as the conditions provide the perfect breeding ground for the species.

If a sting victim is allergic to the venom, they could go into anaphylactic shock and die within minutes. 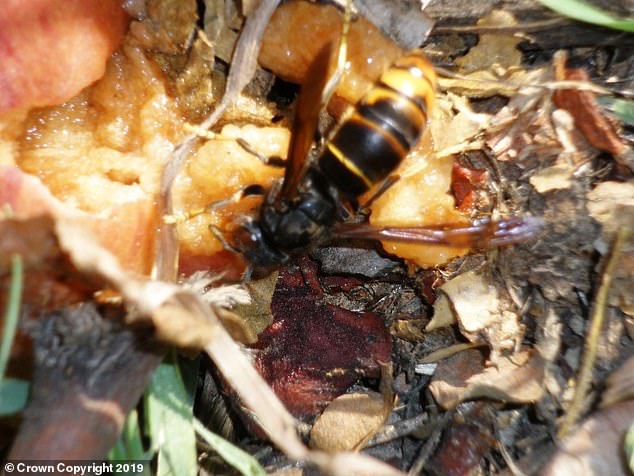 Last year there were nine confirmed sightings of Asian hornets – an individual hornet in Lancashire, Hull, three in Cornwall, two in Hampshire, one in Surrey. The most recent sighting was in Kent in October.

They arrived in mainland Europe in 2014 after sneaking into France in a shipment of pottery from China. They have been blamed for the deaths of at least five people.

They’ve spread rapidly, and the latest figures from the Channel Islands indicate they now pose a major and increasing threat to the UK. 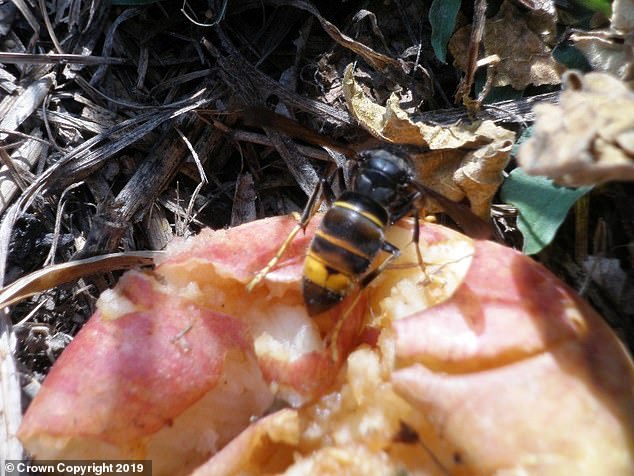 Asian hornets arrived in mainland Europe in 2014 after sneaking into France in a shipment of pottery from China. They have been blamed for the deaths of at least five people

They’re also a threat to wildlife with each one capable of killing and eating up to 50 honey bees a day.

They can destroy a hive of 30,000 honey bees within hours, says a special task force for Defra, the Department for Environment, Food and Rural Affairs.

Terrifyingly, their jaws are strong enough to pierce the protective clothing that beekeepers wear. 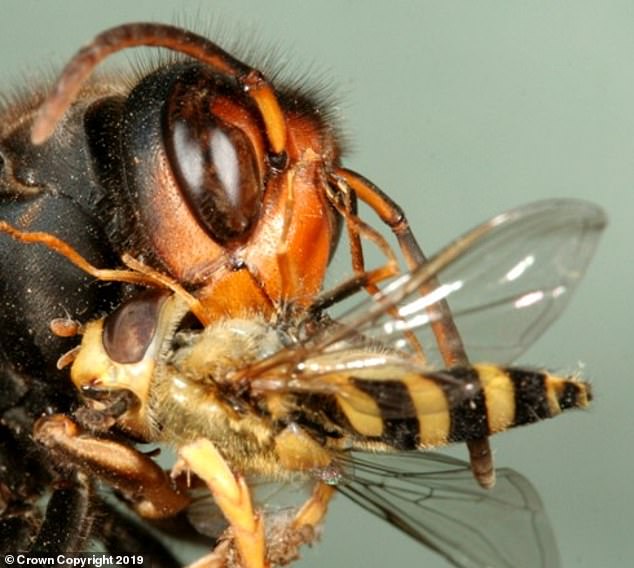 An Asian hornet eating a hoverfly. They’re also a threat to wildlife with each one capable of killing and eating up to 50 honey bees a day

More fearsome than our native species, they are native to temperate and tropical Eastern Asia.

A National Bee Unit spokesman said ‘If you suspect that you have found an Asian hornet, you can send a suspect sample to the NBU laboratory for examination.

‘Use a suitable sturdy container – cardboard rather than plastic – and provide as much detail as possible about the hornet and where you found it.’

But nature experts at conservation group Buglife have begged people not to kill British hornets in mistake for the Asian species. 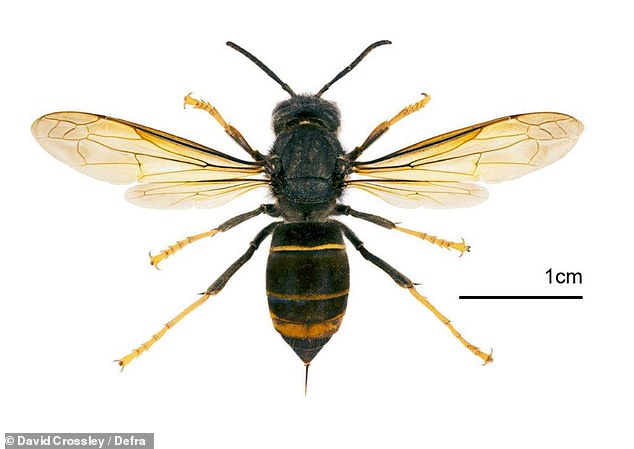 Asian hornets (pictured) are more fearsome than our native species, and are native to temperate and tropical Eastern Asia

A spokesman for Buglife said ‘Our native hornets are quite docile and if you leave them alone they are unlikely to sting. Their nests are to be avoided though.

‘Most of the sightings of supposed Asian hornets are in fact of our native European hornets.

‘Our native hornets and other social wasps play an important part in maintaining a healthy countryside.

‘They pollinate some plants, and they help to control crop pests, so they are really very useful creatures.

Christine McClellan, of the Isle of Wight Beekeeping Association said ‘It is vital we increase the urgent awareness required of islanders to this impending disaster. 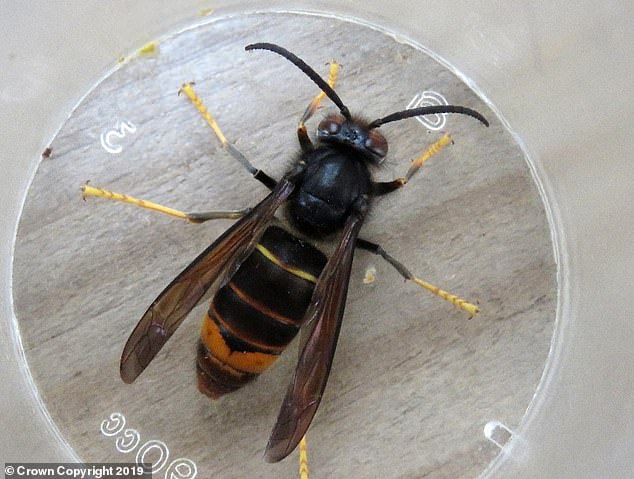 Christine McClellan, of the Isle of Wight Beekeeping Association said ‘It is vital we increase the urgent awareness required of islanders to this impending disaster’

‘If this species is allowed to establish itself on the Isle of Wight, or indeed anywhere in the UK, the effects are going to be disastrous to the eco system.’

West Dorset Beekeepers Association says the number of reported sightings is on the rise and it is a ‘matter of when, not if’ it establishes itself permanently.

Association chairwoman Caroline Dilke said ‘Last year, six nests were spotted in this country and destroyed before they could gain a foothold by producing fertile queens.

Nature experts say last year’s amazing heatwave summer lured them to Britain, and many queens will have hibernated during the winter to start making nests in the spring.

Bob Hogge, former president of the Beekeepers’ Association on Jersey, said: ‘You can’t avoid them coming. The area of this country is too great to be able to spot every single nest and destroy it.

‘But what you can do is get everyone aware of what this hornet looks like and report it, ideally with a photo when they find it.’

For more information on how to spot an Asian hornet, visit the British Beekeepers Association.

WHAT IS THE ASIAN HORNET AND THE EUROPEAN INVASION?

It first arrived in France in 2014, and has since been spreading rapidly, with the first UK sighting in 2016.

It is a highly effective predator of insects, including honey bees and other beneficial species.

The average Asian hornet has a body span of 4.5cm and a wing span of  around 7.6 cm.

Since then the dark brown and orange insects have spread rapidly through the country and started to invade neighbouring countries.

They have also become established in the Channel Islands and were first reported in the UK in 2016.

In 2016, an Asian hornet nest was discovered in Gloucestershire and destroyed.

The hornets, which grow up to two inches long (45mm) and have a three-inch wingspan (75mm), are an aggressive predator of honey bees and other pollinating insects.

The hornets prey on honeybees, hovering like attack helicopters outside their hives and grabbing them on the wing.

The bees are dismembered before being carried back to the hornets’ nest to be fed to larvae.

The charity Plantlife has warned that the hornet ‘poses a deadly threat to honeybees and other pollinators and any potential sightings should be immediately reported to the GB Non-native Species Secretariat.’

A report by the Intergovernmental Science Policy Platform on Biodiversity and Ecosystem Services, estimates that the decline of bees worldwide poses a potentially major risk to world food supplies.

Britain’s bees are thought to have fallen by a third since 2007. The British Beekeepers’ Association warns the public not to disturb a hornets’ nest ‘under any circumstances.