By Ben Spencer and Justin Stoneman For The Daily Mail

Britain could soon be carrying out a million coronavirus tests a day thanks to rapid diagnostics technology being assessed by the NHS.

If approved, the technology might allow routine monthly testing of every household in the country.

Documents seen by the Daily Mail reveal the NHS is in early talks over the tests, which cost less than £2.50 each.

Britain could soon be carrying out a million coronavirus tests a day thanks to rapid diagnostics technology being assessed by the NHS. Pictured: A drive-through test centre in Chessington earlier this month

The potential breakthrough could be made if genetic testing techniques are adopted, DNA testing experts claim. They say this could increase testing capacity across the country ten-fold.

The specialists have been brought in to consult on processes used at the Government’s flagship testing centres, named ‘Lighthouse’ labs.

Genetic testing technology offered by the LGC Group is being assessed in Milton Keynes. And a second system called Popmax, created by two scientists who used to run a DNA testing firm, is under consideration for an NHS staff testing pilot in Kent.

Internal correspondence between senior NHS England officials says: ‘We are currently looking at the LGC… technology with a potential of 1,000,000 tests a day, we have partnered them with an NHS lab to get the test validated.’ 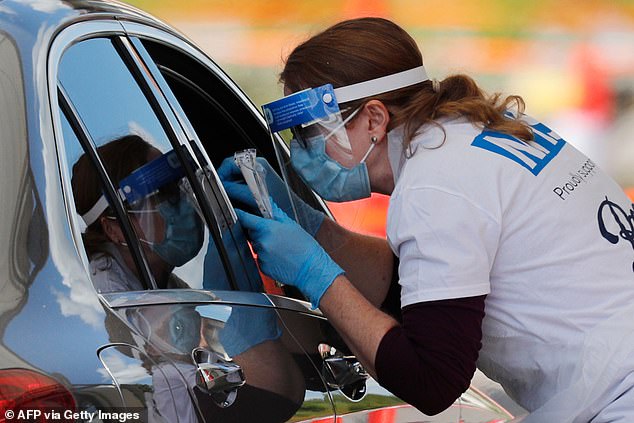 Documents seen by the Daily Mail reveal the NHS is in early talks over the tests, which cost less than £2.50 each. Pictured: A drive-through test centre in Chessington earlier this month

East Kent Hospitals Trust is keen to use the Popmax system to test all 8,000 staff every three days – whether they have symptoms or not – to catch the virus before doctors and nurses even start to feel unwell.

Such a boost to testing capacity will be key to success of the Government’s contact tracing strategy, which is due to be rolled out in the coming days.

But it needs to go further if contact tracing is to work.

Contact tracing will require every individual who has been in contact with someone who tests positive for Covid-19 to self-isolate for 14 days – irrespective of whether they have symptoms or not. The period of self-isolation could be significantly shortened if they are tested – but officials believe they will not have the capacity to test each person.

Critics fear many will simply disobey the order to self-isolate. 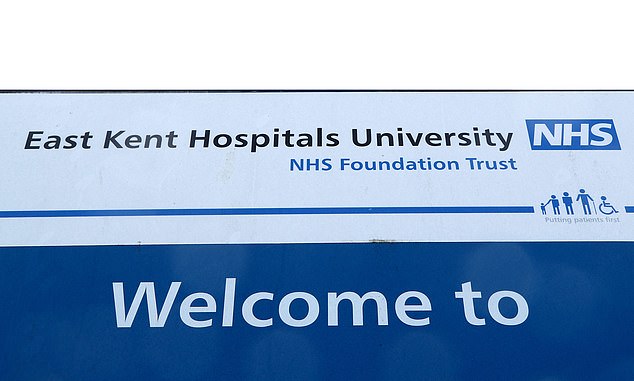 East Kent Hospitals Trust is keen to use the Popmax system to test all 8,000 staff every three days

A significant expansion of testing capacity would solve this problem if results were available within a few days. And if the genetic technology were to be used for monthly testing of every household, the disease could be eradicated in large pockets of the country.

Mr Curtis said: ‘The golden bullet in the battle had been sitting unused but could be realised.

‘This could transform the fight against the coronavirus, the proven technology is there.’

The Government’s test centres are not efficient at the moment, he explained. Lighthouse labs use plates that hold up to 384 patient samples to be tested in one batch.

But the new approach involves hardware technology that instead carries tens of thousands of ssamples to be processed at once. Mr Robinson was brought into the Milton Keynes Lighthouse lab a fortnight ago. ‘A large percentage of the testing units were sitting unused,’ he said.

‘This allowed me to improve the testing speed system twofold for one bottleneck process on the days that I was in.’

Ex-World Health Organisation adviser Professor Karol Sikora said: ‘Popmax could give a map of the viral spread in the country and enable us to control it.’

There is also hope with LGC, which acts as the Government chemist and statutory adviser, as well as holding a separate role as a commercial company. It already carries out 1.5million commercial DNA tests a day.