Some 19,790 people tested positive for coronavirus in the UK today, marking a rise of just 16.5 per cent on the 16,982 cases reported last Sunday.

However, today’s daily death toll has skyrocketed by 125 per cent compared to the 67 deaths reported this time last week.

The 151 Covid-19 deaths across all settings – including hospitals, care homes and the wider community – reported today is the highest Sunday death toll since May 24.

Figures on Sunday are usually smaller due to a delay in processing over the weekend.

It comes after a record 26,680 cases were reported on Wednesday, while the highest number of daily deaths last week was 241 on Tuesday.

There is usually under-reporting on weekends, however, so any decline in infections or deaths today compared to the last week must be viewed with caution.

It comes amid tightened restrictions across the United Kingdom, particularly in Wales which has imposed a 17-day full lockdown with people only allowed out of their homes for essential items and exercise. 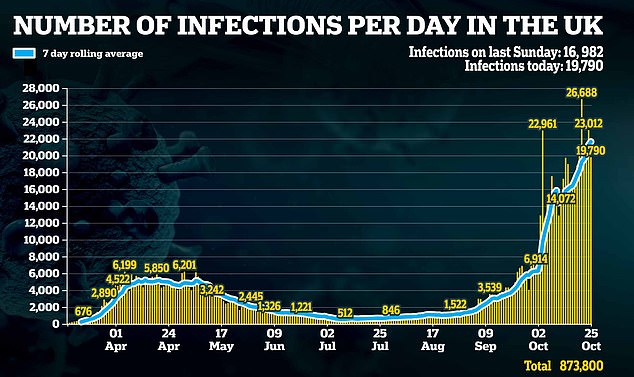 The number of new infections increased by around 17 percent today 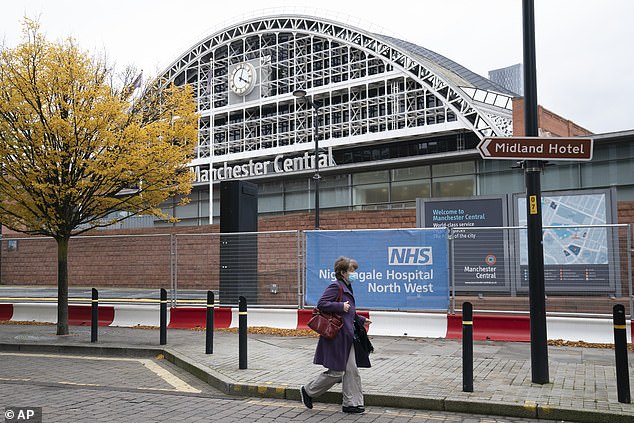 A member of the public passes the Nightingale Hospital North West in Manchester, England, Thursday

In Northern Ireland a four-week tightening of restrictions, such as on household mixing, was introduced on Friday, while in Scotland Nicola Sturgeon has outline five levels of coronavirus rules, similar to the English three-tiered system.

But hope was earlier delivered from across the Atlantic, as senior Donald Trump adviser Dr Anthony Fauci said that a ‘safe and effective’ vaccine could be ready by the end of next month.

It comes as an email sent by an NHS Trust chief revealed the health service has been told to have a staff vaccine scheme ready to go by early December.

Speaking on the Andrew Marr Show, Dr Fauci confirmed a claim from US President that a vaccine was nearly ready to go.

The United States has donated $1bn toward the Oxford University-AstraZeneca vaccine, securing 400million doses, as human trials of the vaccine started in the States last month.

The UK Government has pre-ordered 100million doses of the trial’s vaccine, should it be safe to use.

Dr Fauci told the BBC’s Andrew Marr show: ‘We will know whether a vaccine is safe and effective by the end of November, the beginning of December. 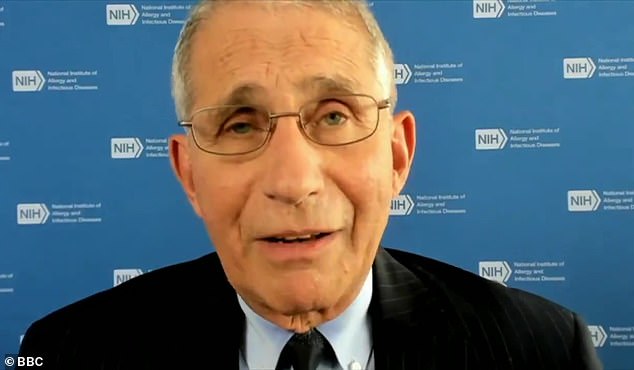 Speaking on BBC’s Andrew Marr Show on Sunday morning, Dr Fauci said a vaccine could be ready by the end of the year, but most of the public would not have access to it until late 2021 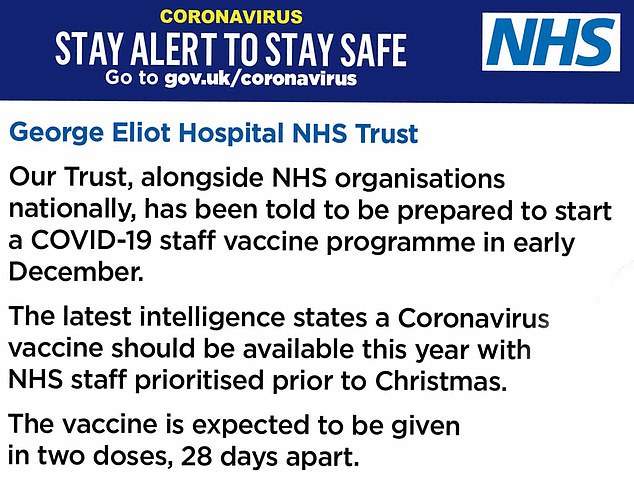 Plans are being drawn up for frontline NHS staff to receive a coronavirus vaccine within weeks, as the Government moves to accelerate the timetable for a mass roll-out. An email sent by an NHS Trust chief to his staff, seen by The Mail on Sunday, reveals the Health Service is preparing for a national vaccination programme before Christmas. (Above, the memo, sent by Glen Burley, chief executive of George Eliot Hospital NHS Trust in Warwickshire)

‘But the question is, once you have a safe and effective vaccine, or more than one, how can you get it to the people who need it as quickly as possible?

‘The amount of doses that will be available in December will not certainly be enough to vaccinate everybody, you’ll have to wait several months into 2021.’

Dr Fauci’s comments come after it was revealed that the Government has introduced new laws that would allow the UK to bypass the EU approval process if a safe and effective jab is ready before the end of the post-Brexit transition period on December 31.

The move will boost optimism that a ‘game-changing’ vaccine will soon allow Boris Johnson to relax the social restrictions which have crippled the country since March.

A memo from Glen Burley, chief executive of George Eliot Hospital NHS Trust in Warwickshire, suggested NHS staff would be receiving a vaccine before Christmas. In a memo to staff, he wrote: ‘Our Trust, alongside NHS organisations nationally, has been told to be prepared to start a Covid-19 staff vaccine programme in early December.

‘The latest intelligence states a coronavirus vaccine should be available this year with NHS staff prioritised prior to Christmas.’

He said healthcare workers will likely be prioritised first for any vaccine, as well as people considered at increased risk of complications. 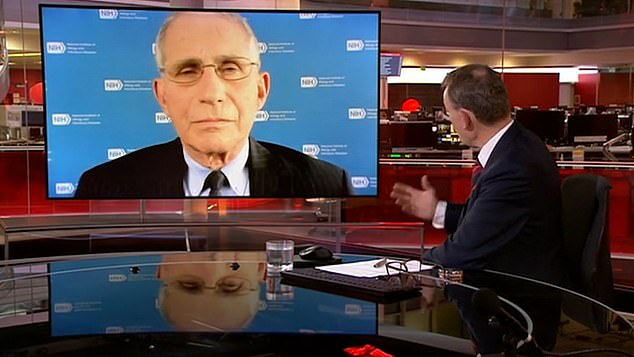 Dr Fauci was asked for his thoughts after Donald Trump, speaking at a US presidential debate earlier this week, Mr Trump said a vaccine would be ready ‘by the end of the year’.

Dr Fauci said most Brits would not receive a vaccine until later in 2021.

He said: ‘That could start by the end of this year, the beginning of January, February, March of next year.

‘When you talk about vaccinating a substantial proportion of the population, so that you can have a significant impact on the dynamics of the outbreak, that very likely will not be in to the second or third quarter.’

Mr Burley added that the vaccine was ‘expected to be given in two doses, 28 days apart’ and urged his colleagues to have had their flu shot by the end of November so they can qualify for a Covid-19 jab.

In other developments related to Covid: 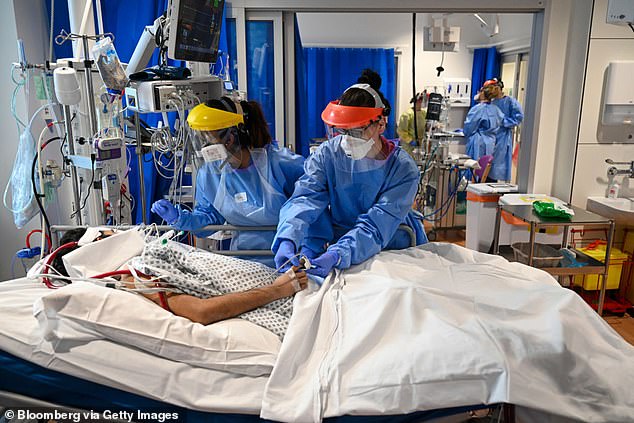 Despite facing continued criticism, Mr Hancock has pushed through new laws to strip the European Medicines Agency of the power to approve the vaccine if it is ready before the end of December. Instead, British watchdogs will be able to fast-track its production.

A health official said: ‘Although we still think it most likely that the vaccine will be ready early next year, Matt wants the freedom to operate if it all moves more quickly.’

The official added that under changes to the Human Medicines Regulations 2012, which took effect on October 16, the UK was ‘no longer beholden to the EU process if a vaccine is developed before 2021 and has strong evidence proving it is safe, high quality and effective’.

They added: ‘Should a vaccine be available before the end of the year, we have put in place robust measures to allow the Medicines and Healthcare products Regulatory Agency to authorise the vaccine for UK patients. This will only happen if there is a strong public health justification and the EU process is taking too long.’

The regulator will have autonomy to approve vaccines for the UK from 2021 in any case.

A senior Government source said: ‘We have made sure that if a vaccine is proven safe and effective we won’t be held back from deploying it by the need for approval from Brussels.’ 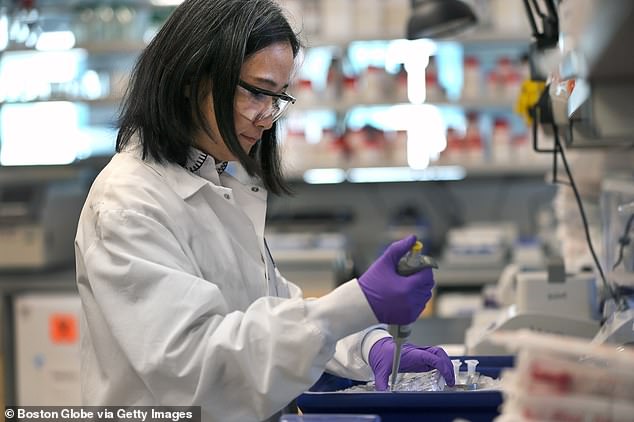 Despite facing continued criticism, Mr Hancock has pushed through new laws to strip the European Medicines Agency of the power to approve the vaccine if it is ready before the end of December. Instead, British watchdogs will be able to fast-track its production. (File image of an experimental Covid medicine being tested)

NHS staff are most likely to receive the vaccine being developed by Oxford University and pharmaceutical giant AstraZeneca, which is in the final stages of trials.

The Government has already bought 100 million doses of the drug, which is administered in two doses. Under Government plans, frontline NHS staff and care home workers will be vaccinated first, followed by those aged over 80.

Human trials of the Oxford vaccine have been under way since April, involving about 20,000 volunteers worldwide. Scientists have reported a ‘robust immune response’ and no serious side-effects.

Last night, David Eltringham, managing director at George Eliot Hospital NHS Trust, said: ‘We don’t have a definite date for delivery of the vaccine, but we are making ready to deploy the vaccine from the beginning of December.’

By STEPHEN ADAMS for the Mail On Sunday

Britain’s front-running Covid vaccine has only been tested on about 500 elderly people in this country, raising questions about how effective it might be for a vital section of the population.

There are high hopes for Oxford University’s ‘ChAdOx’ jab but only 1,000 or so of the 10,000 people recruited to the UK arm of Oxford’s trial are aged 70 or over. Half of them have been given the vaccine and half have had a placebo.

‘Clearly, if you’ve just got 500 vaccinated and you’ve given 500 the placebo and you are looking to see a significant difference in protection between the two… you may not get much out, in terms of data,’ he said.

However, he added that early results appeared to show that older people given Covid vaccines developed good immune responses, so he was hopeful they would work well in the elderly.

The issue is critical because the virus is much more deadly in older people. An 80-year-old is about 1,000 times more likely to die of the virus than a 20-year-old, while five out of every six Covid-related deaths have been in the over-70s.

Earlier this month, Kate Bingham, head of the UK’s Vaccine Taskforce, gave a clear signal that Covid vaccination is to be aimed at older people, even though vaccines are often less effective in that group as their immune systems tend to respond less strongly.

For example, the flu vaccine given in 2016-17 was completely ineffective in the over-65s, according to data from Public Health England. It did, however, work well in younger people.

As Oxford’s Covid vaccine works in a different way, there is no specific reason to believe it will be a dud in the elderly but all the leading jab contenders are acutely aware of the issue.

Oxford has launched parallel trials in Brazil, South Africa and the US – but only the American ‘arm’ is enrolling over-65s. AstraZeneca, which is handling the US trial enquiries, refused to say how many over-65s have been recruited there so far.