Britain today announced 23 more coronavirus deaths in the preliminary toll — including none in Scotland for the fourth day in a row.

Department of Health chiefs have yet to confirm the final daily figure, which is often higher because it takes into account laboratory-confirmed fatalities in all settings.

The early count — which only includes a fraction of the coronavirus deaths in England — is calculated by adding up all of the individual updates declared by each of the home nations.

NHS England today posted 19 deaths in hospitals across the country. Wales recorded three Covid-19 fatalities in all settings, followed by one in Northern Ireland and none in Scotland.

Death tolls on Sundays and Mondays are always low because of a recording lag over the weekend. Just 15 fatalities were announced last Monday and 36 were registered yesterday.

It means the official death toll now stands at 43,573 — but the real number of coronavirus victims is thought to be in the region of 55,000, when all suspected deaths are taken into account. 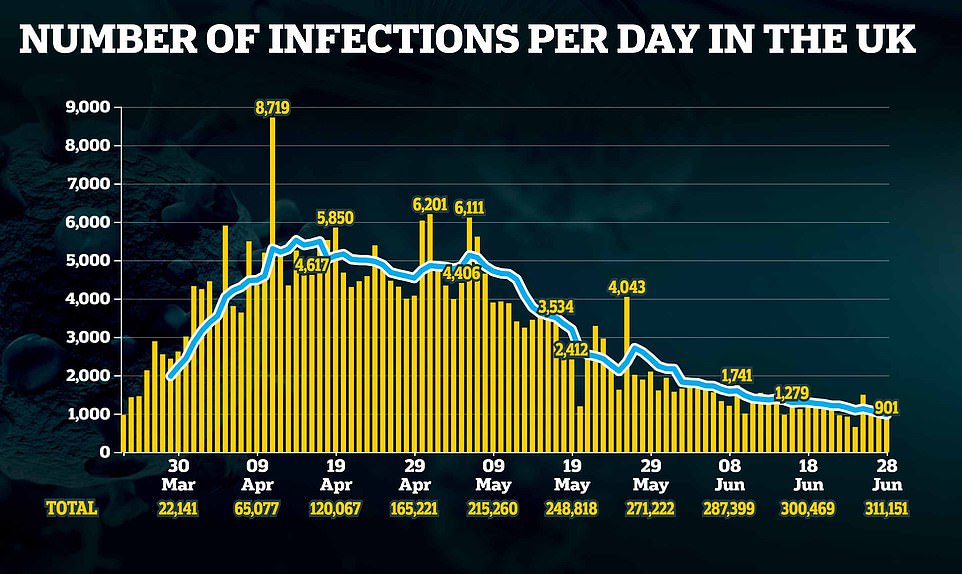 Department of Health figures released yesterday showed 127,709 tests were carried out or posted the day before. The number includes antibody tests for frontline NHS and care workers.

Scotland’s First Minister Nicola Sturgeon revealed there had been no new deaths north of the border in an official government briefing this morning.

She said: ‘This is the fourth day in a row when no deaths of patients confirmed through a test have been recorded in Scotland.’

‘Now, of course, two of these days have been weekends and we know that registration can be artificially low at weekends, and we may see more deaths registered later this week.

‘But there’s no doubt that these recent figures demonstrate beyond any doubt how much progress Scotland has made in tackling Covid and that is down to the efforts and sacrifices of everyone across the country.’

Ms Sturgeon — who last week claimed Scotland was ‘not far away’ from eliminating the coronavirus — added: ‘I want again to say a heartfelt thank you to all of you for that.’

In other developments today, Portugal has reacted with fury after apparently being left off a list of countries that will be able to form quarantine-free air bridges with the UK.

Tourism is the largest sector of the Atlantic nation’s economy and many areas including Lisbon, Porto and the Algarve are popular with UK holidaymakers.

But it is understood that the nation will not be on the initial list of green or amber nations allowed to couple-up with the UK under a traffic light system, as it is the only European nation with a higher rate of coronavirus infections than the UK.

Department of Health’s latest death count for all settings stands at 43,550.