David Davis is ready to warn EU leaders Brexit talks face collapse unless Brussels tears up its current demands for a ‘divorce bill’.

Discussing the contentious payment for the first time this week, UK negotiators rubbished the bloc’s financial demands and accused the EU of forcing Britain to pay for ‘everything including the kitchen sink’.

So far Brussels chiefs have refused to discuss any future trade deal until Britain agrees how much it is willing to pay towards exit bill that could reach £90billion.

But last night Theresa May appealed to EU leaders, including Angela Merkel and Emmanuel Macron, to kick start the stalling talks or face a backlash from businesses across the continent which will suffer.

And following a hostile meeting in Brussels, the Brexit Secretary is preparing to call on leaders of the 27 remaining member states to soften their demands.

British officials believe Michel Barnier, chief negotiator for the European Commission, has been left with little wriggle room due to the ‘rigid’ mandate previously set by EU leaders.

While the UK has guaranteed it will pay some money as part of any deal, the EU is determined to extract tens of billions to plug the hole left by our departure.

British negotiators have this week presented 11 pages of legal advice, following months of dispute over our obligations, which raise significant concerns about the legality of the EU demands.

The UK believes a Commission paper setting out the supposed obligations is ‘not satisfactory’ and wants to scrutinise each financial demand individually.

A source familiar with the UK’s negotiating position said: ‘Nobody would write a cheque on the basis of the Commission’s four-page paper.’

An eventual deal could see the UK paying into the EU’s budget for two years after Brexit as part of a transition arrangement, with more contentious demands struck out.

The discussions come amid a deepening war of words over how to find agreement on the issue, with British ministers desperate to start trade talks as soon as possible. 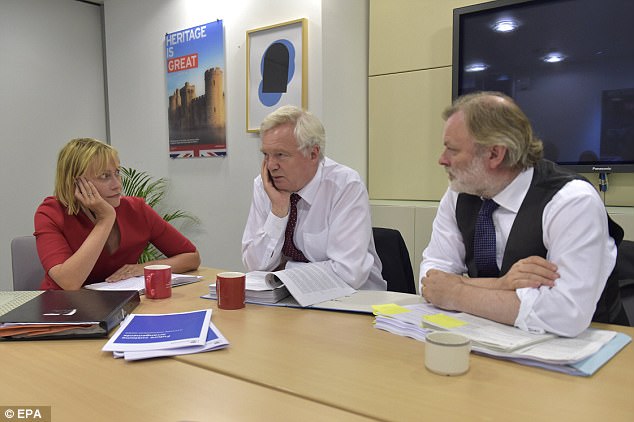 In a bid to get Brussels to see sense last night, the Prime Minister said: ‘I think a good trade deal is not just about the UK, it is about what is good for businesses in what will be the 27 remaining states of the EU as well. I think it is in all our interest to move onto those trade talks and to get a good deal.’

Despite his stern warnings as the third round of negotiations started on Monday, Mr Barnier yesterday hinted at compromise if Britain provides more detail about its position.

He told reporters in Brussels: ‘We need to know their position and then I can be flexible.’

Writing on Twitter, he also said: ‘European Commission guidelines are designed for serious and constructive negotiations, but we need clear UK positions on all issues.’

However the Prime Minister hit back at accusations from European Commission president Jean-Claude Juncker and Mr Barnier that Britain has so far failed to spell out in detail what it wants. Mr Juncker said it was ‘crystal clear’ that trade talks should not yet begin. 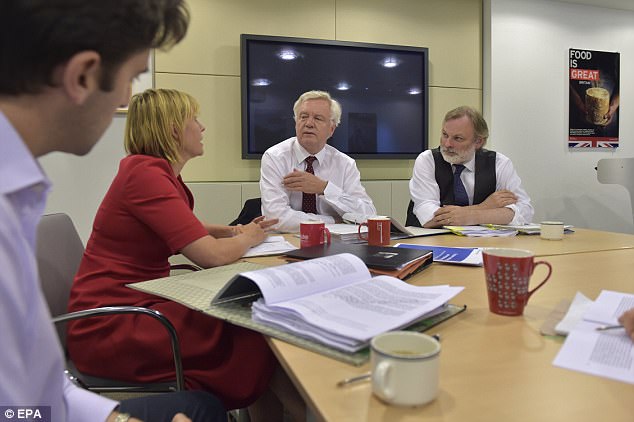 The trio met yesterday meet at the British representation, on the sideline of the 3rd round of Brexit Negotiation with the European commission in Brussels, Belgium

Mrs May said: ‘We have done a significant amount of work. You have seen some of the papers we have been publishing, we will be publishing more papers setting out more aspects of our future relationship and where we want it to go.’

But she said Britain had no intention of putting a figure on how much it thinks that it owes towards the Brexit bill drawn up by the EU. Mrs May was speaking from Japan, where has been meeting this week with Prime Minister Shinzo Abe in the hope of laying the ground for a free trade deal after Brexit.

However the European Parliament’s Brexit co-ordinator poured cold water on the idea of breaking the impasse over the divorce bill. Guy Verhofstadt said moving to trade talks in October as hoped by the UK appears increasingly unlikely.

This prompted an angry rebuke from Tory MEP Syed Kamall who accused the former Belgian prime minister of acting ‘way beyond his pay grade’.

Brussels has also insisted the future trade relationship will not be discussed until the UK makes ‘sufficient progress’ on agreeing citizens’ rights and the Northern Ireland border. 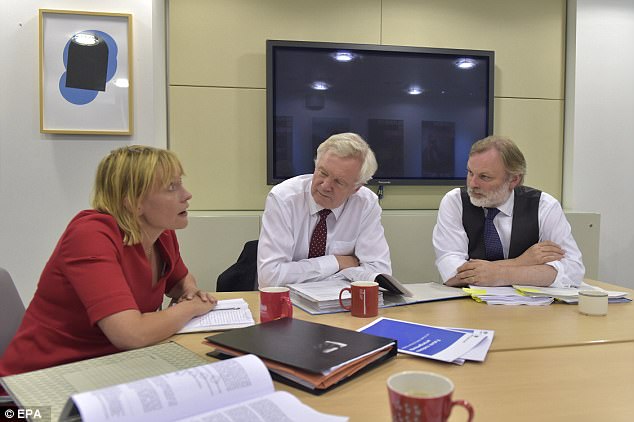 Britain however remains confident that trade talks will be given the green light during an EU leaders’ summit in October and that the scope of the Brexit bill can be changed as officials ‘peel away’ various negotiating hurdles from EU guidelines.

Despite this, several issues remain disputed, including the role of the European Court of Justice.

Mr Davis’s team has also been left perplexed by the EU’s refusal to negotiate on the UK remaining part of the European Health Insurance Card scheme, which allows holidaymakers access to hospital care while they are abroad.

Mr Davis arrived in Brussels last night to tie off this week’s discussions and is expected to stand alongside Mr Barnier at a press conference today.