Britain’s Adam Yates was edged out in a three-man sprint as France’s Julian Alaphilippe won stage two of the Tour de France to take the yellow jersey.

Mitchelton-Scott rider Yates caught a two-man breakaway of Alaphilippe and Switzerland’s Marc Hirschi on the final climb with 10kilometres to go in Nice and the trio worked as a team to hold off the peloton.

They were almost caught as they played cat and mouse with the finish line beckoning, but Deceuninck-Quick-Step rider Alaphilippe’s final burst saw him pip Hirschi (Sunweb), with Yates crossing one second behind.

Alaphilippe took the yellow jersey from stage-one winner Alexander Kristoff and Yates moved up to second in the general classification, four seconds behind.

Yates, bidding to become the ninth Briton to wear the overall leader’s yellow jersey in the Tour, made his break to catch the leading pair on the final ascent.

‘I jumped across to Alaphilippe and Hirschi and then we started working,’ he said. ‘It wasn’t super-easy.

‘In the end, I was never going to win the sprint, those two are both faster than me, but it’s been a good stage two and I’m pretty happy with that. 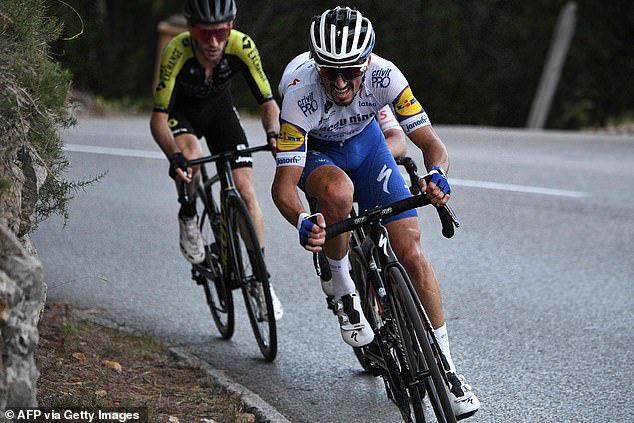 Alaphilippe’s final burst saw him pip Marc Hirschi, with Yates then crossing one second behind

‘Maybe if I’d had another climb or something but in a sprint with those two, in this kind of finish, I was always going to end up second or third, but it’s been a good day.’

Alaphilippe, who sealed his fifth Tour de France stage win in a time of four hours 55 minutes and 27 seconds, was pushed all the way to the line by Hirschi.

Alaphilippe leads the general classification in a time of 8:41.35, four seconds ahead of Yates, with Hirschi a further three seconds back and Higuita in fourth. 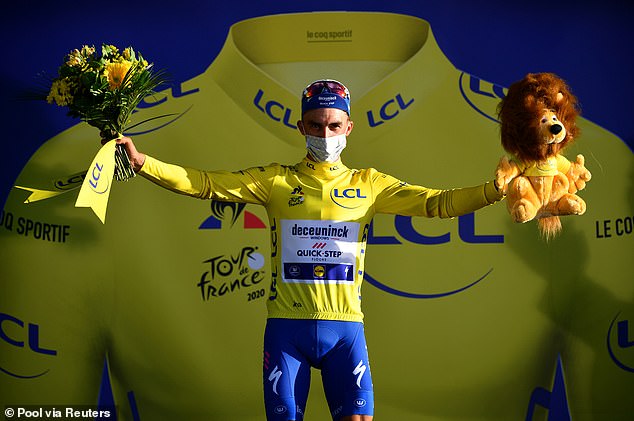 Alaphilippe leads the general classification in a time of 8:41.35, four seconds ahead of Yates

Alaphilippe dedicated his stage win to his late father and could not hide his emotions at the finish.

‘There’s big emotion because I’ve won on the Tour,’ he said. ‘I haven’t won since the start of the season, so I’ve been working really hard.

‘I’ve been working hard when it’s been really tough due to Covid and I want to dedicate this victory to my father, who died in June.

‘I got to the last climb and gave it my all up that climb and having Adam Yates and Hirschi come up as well made me nervous, but we collaborated well into a headwind, which was tough, but I made it.’