An offer for ‘Britain’s cheapest Sunday roast’ has drawn dozens of visitors and rave reviews to a small Kent pub.

The Britannia in Margate is making the popular meal with all the trimmings for just £1 – slashed from its usual price of £7.50.

Around 100 people packed themselves into the pub to try a £1 Sunday lunch for the first time today.

The Britannia pub in Margate, Kent has slashed the price of their Sunday roast from £7.50 to a pound. Customer numbers have increased massively, with 100 people turning for the first day of the offer 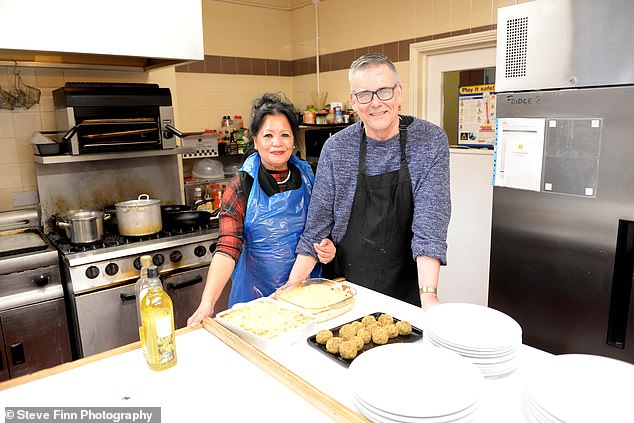 Pub landlords Paul, 66, and Edna Rollins, 67, have said the amazing success of the offer means they are now thinking of taking on new staff

Customers such as pub regular Joe Dryden, 31, were thrilled with the experience, and said the food tasted better than usual.

‘The beef was actually a bit better. I was quite surprised. It is nice to see a lot of new faces,’ said Mr Dryden. 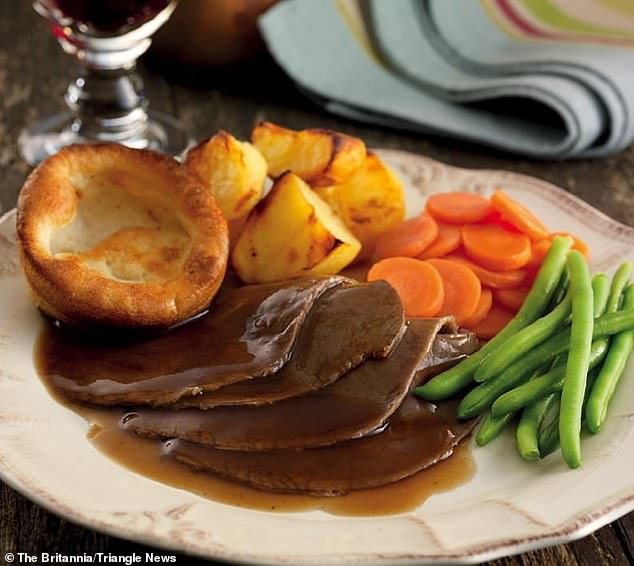 The dinner is a choice of locally-sourced beef or turkey, and comes with generous helpings of roast potatoes, carrots, green beans, parsnips, stuffing, cauliflower cheese and Yorkshire puddings

‘Usually on a Sunday you kind of know people, but if you look round now, I don’t know anyone here which is good.’

The pub’s owners Paul Rollins, 66, with his wife, Edna, 68 have kept it for the last four years and the amazing success of the offer means they are now thinking of taking on new staff.

‘I have managed to get very good publicity and get the money back from the advertising and manage to pass it on to the customers. 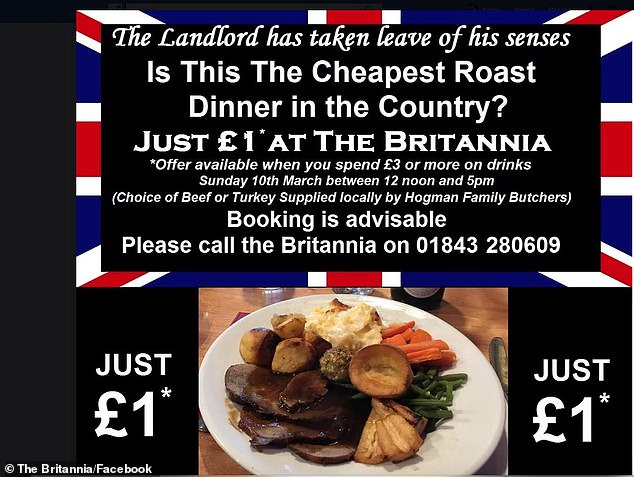 An advertisement for the offer jokes that ‘The landlord has taken leave of his senses!’. To claim the £1 roast you need to spend £3 at the bar, but this is still £3.50 less than the original price of the meal

Since news of the £1 lunch was announced, the pub has had bed and breakfast bookings from as far a field as Bradford, Yorkshire.

Mr Rollins explained a woman rang up asking to book one of the £60 Bed and Breakfast rooms because she wanted to taste the food.

He said it is great for Margate and the local area, adding that being able to use local butchers helps the economy of the area. 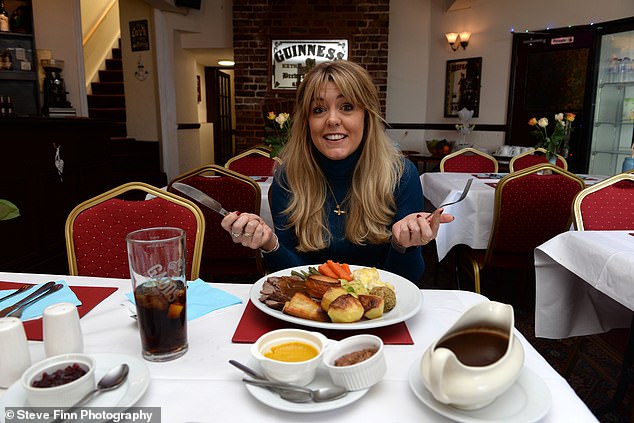 FeMail’s Hayley Richardson tries a full Sunday roast for £1.00 at the Britannia pub in Margate on Kent’s north coast

More than 100 people came through the doors yesterday after an advert was posted which said: ‘The landlord has taken leave of his senses!’

Today was the first time the pub had put the offer on.

The pub is offering either a turkey or roast beef roast with meat supplied by the local butcher for £1 when customers spend £3 at the bar.

The offer brought back the daughter of the pub’s former landlady and landlord. 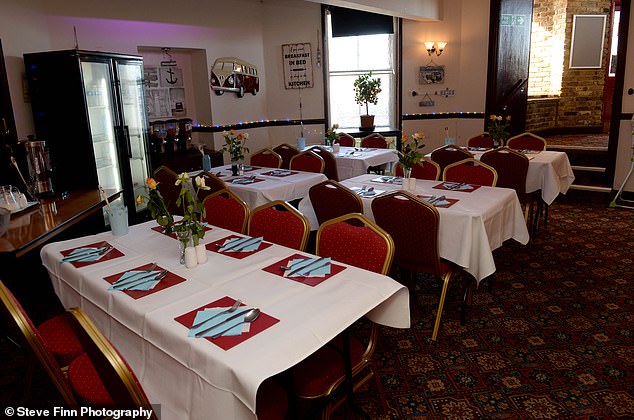 A usual Sunday roast at the pub would attract between 20-50 diners, but today restaurant saw 100 Sunday lunchers through the door. The roast is fully booked for next week already

Tracey Pettman, 55, ate at the pub for the first time in 40-years with her daughter Lauren, 26, when a friend told her of the offer.

When she was 11-years-old her mother and father bought the pub in January 1975.

Sitting next to her daughter she recalled her father, Wally Street, was a docker in East London and who fell in love with area when he was evacuated to Whitstable in the Blitz.

After he was made redundant, he and his wife Joyce, looked at pubs in area and settled on the Britannia Inn. 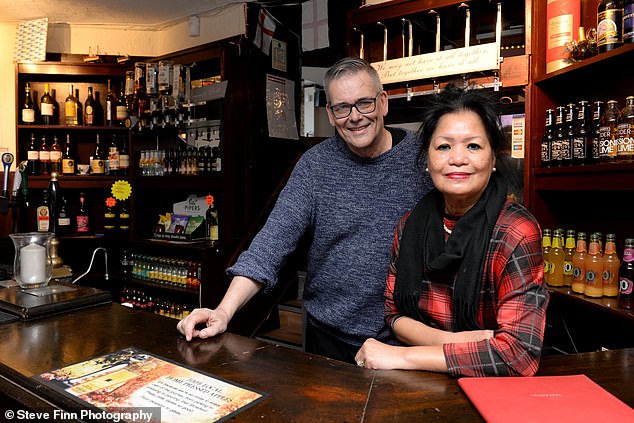 Mr Rollins explained a woman from Yorkshire rang up asking to book one of the £60 Bed and Breakfast rooms because she wanted to taste the food. He added that the has been great for Margate and the local area, and uses local butchers to provide the meat

Tracey was thrilled with the food when she visited.

She said: ‘We just thought we would come and try it. All of it was lovely, nice and hot.’

Lauren, who works in sales, added: ‘It was really nice. My favourite part was the beef and cauliflower cheese.’

Wally died when he was 61 but his widow is still alive and aged 83.

Customers are also treated to music by two-man jazz band Maple Dilley, made up of band members Roger Dilley, 56, and Paul Maple, 53.

They were joined by friends Emily Thomas, 43, and Janett Edwards, 52 who both work for charities.

Janett said of the food: ‘I thought it was lovely. It is a nice friendly place and the service is good.’

She and Emily had the beef while Paul had the turkey. Guitarist Roger praised the grub saying: ‘It was piping hot.

‘The beef was superb- the whole meal was superb. The fact it was piping hot was a big thumbs up for me because I cannot stand cold food.

‘I would definitively recommend it.’