From the Playboy bunny brutally raped and murdered in her own flat to the BBC TV presenter shot dead on her doorstep, some of Britain’s most infamous killings remain unsolved years later.

Despite investigations spanning years and often decades, police are still no closer to catching the cold-blooded killers.

Families of the victims have been left tormented and without justice for years after their loved one was cruelly taken from them.

MailOnline looks back on some of the most notorious cases in an effort to help spread the details of the cases and bring the killers to justice.

Eve Stratford was a ‘bunny girl’ waitress at the Playboy Club in Mayfair in the 1970s, and the girlfriend of the lead singer of pop band Onyx.

The glamour model, 22, was found murdered in her home in east London in 1975 – her throat had been slashed between eight and 12 times.

Her hands had been tied up with a scarf and there was a stocking tied round her leg – she is believed to have been raped.

Detectives said there was no sign of forced entry to the flat, leading them to believe she had invited the killer in and may have known them.

Six months after Eve’s death, Lynne Weedon, 16, was brutally attacked and raped in an alleyway near her home in Hounslow at 11pm on September 3. She died after being found barely alive at an electricity sub station the next day.

Former Met Police detective Colin Sutton believes a third woman, Lynda Farrow – who was knifed to death in her home four years later in 1979 – was also a victim of the same killer.

Eve and Lynne’s murders were linked in 2007 after matching DNA was discovered on the victims, who did not know each other.

The Met Police have confirmed that there are no recent updates into her death.

Eve Stratford was found with her throat slashed on the evening of March 18, 1975 by her boyfriend Tony Priest, the lead singer with the pop band Onyx 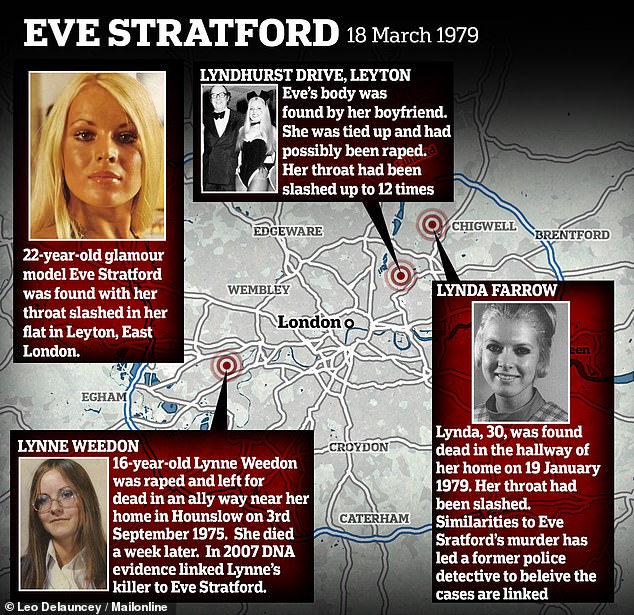 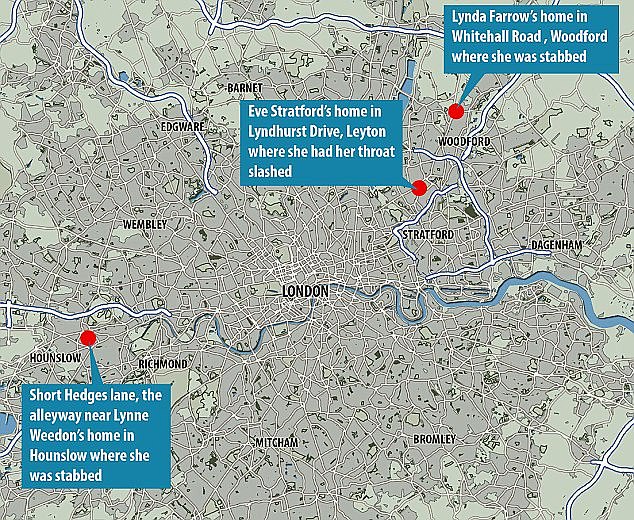 One of Britain’s most infamous murders is the killing of Crimewatch presenter Jill Dando, 37, shot dead outside her west London home in 1999.

Ms Dando, was shot once in the head on her doorstep and was lying in a pool of blood when neighbours found her slumped against her front door.

A blue Range Rover that had been parked on the street where Jill lived Gowan Avenue was captured on CCTV driving away at speed from the murder scene.

A huge police investigation was launched, which resulted in unemployed loner Barry George being jailed for her murder in July 2001.

He was granted a retrial on appeal, and received a unanimous acquittal by a jury in August 2008 after a retrial. 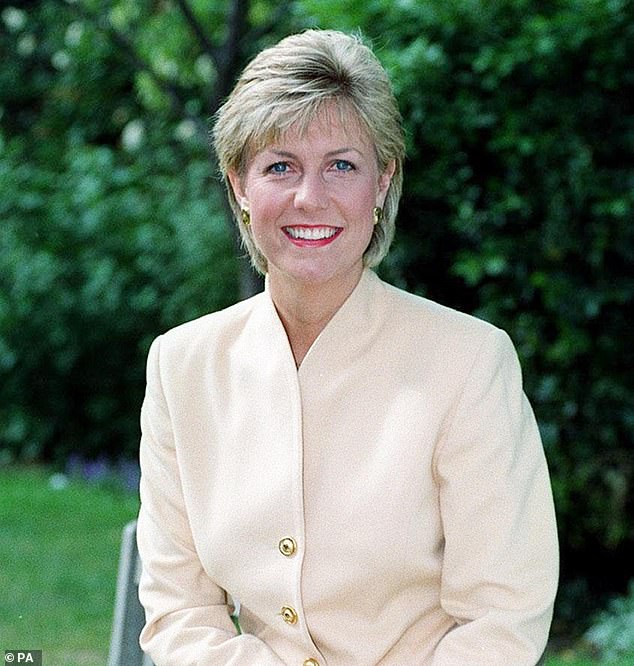 Crimewatch presenter Jill Dando was shot dead outside her flat in Fulham, West London, in 1999 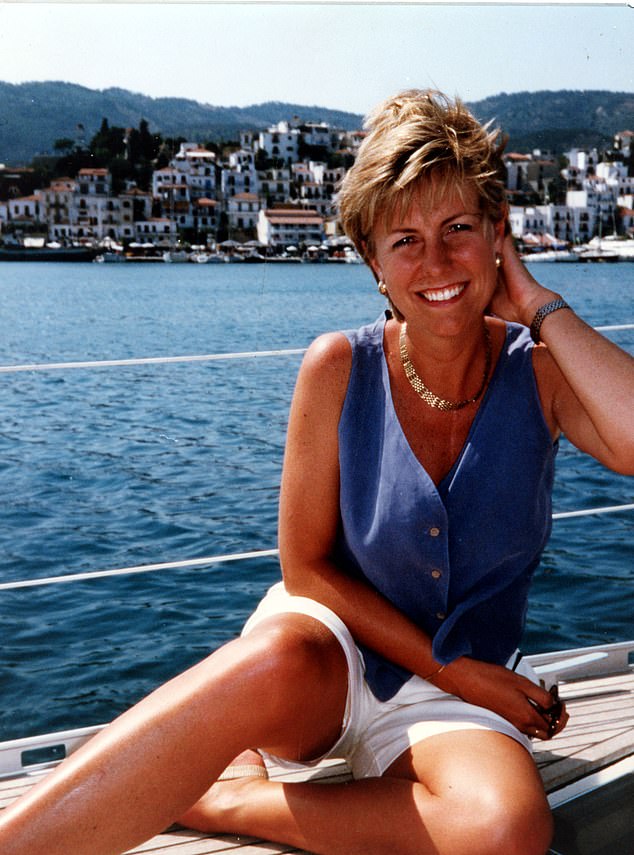 Ms Dando (pictured in Skiathos, Greece) was a popular broadcaster in the 1990s 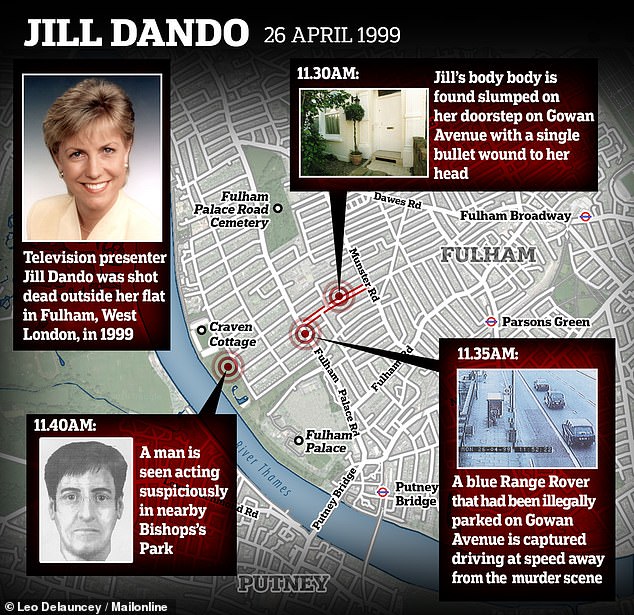 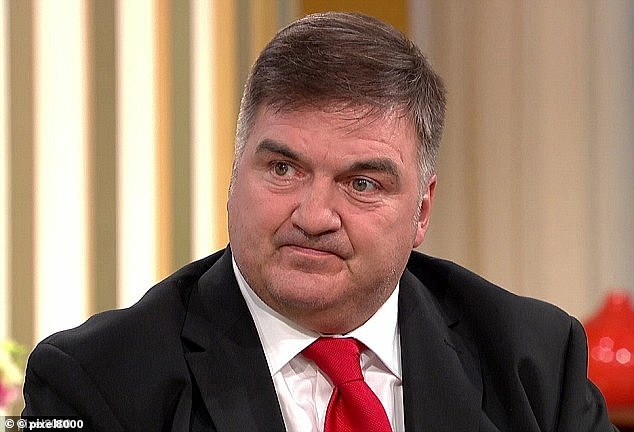 Jill’s murder prompted an enormous inquiry by Scotland Yard and resulted in unemployed loner Barry George (pictured) being jailed for her murder in July 2001. He was later acquitted of the crime

The ‘Jack The Stripper’ murders

London in its 1960s heyday was shocked by a series of murders, which saw six nude bodies dumped around the Thames.

First known as the ‘Hammersmith nude murders’, all the victims were women sex workers and were found with their teeth pulled out and their clothes removed.

Hannah Tailford was the first to be found by the river in Hammersmith in February 1964.

The body of 21-year-old Frances Brown was uncovered in Kensington in November, and the following February Irish immigrant Bridget O’Hara was found in Acton.

Although a number of suspects have been identified, no killer has ever been conclusively tracked down. 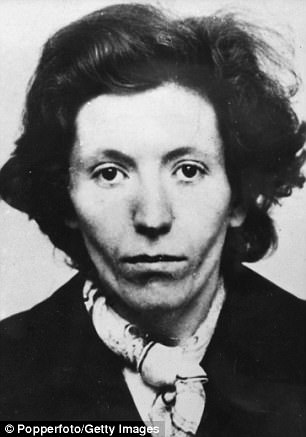 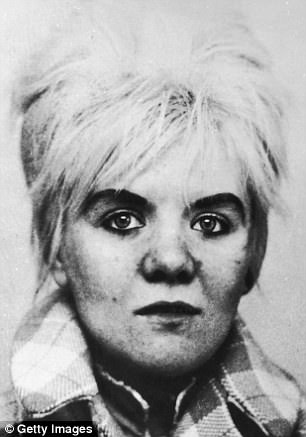 Jack The Stripper victims: The first body, that of 30-year-old Hannah Tailford (left), was found by the River Thames at Hammersmith in February 1964. Irene Lockwood (right), 25, was found in April on the same stretch of riverbank where Hannah’s corpse had been dumped 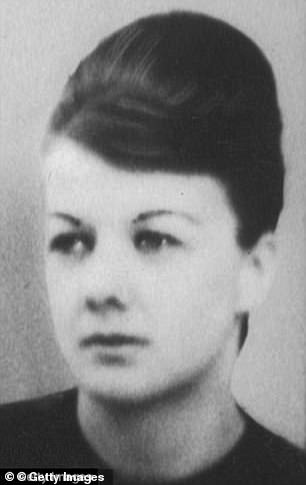 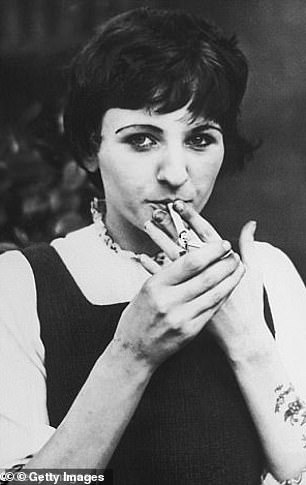 Several weeks later, passers-by came across the body of 22-year-old Helen Barthelemy (left) in an alley. In July, just up the river at Chiswick, the remains of Mary Fleming, 30, were found in a garage forecourt. The corpse of a fifth victim, Frances Brown (right), 21, was discovered in Kensington during November the same year 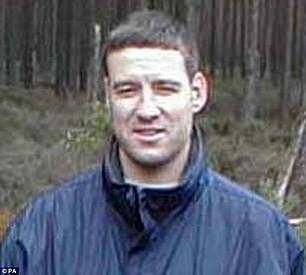 Mr Wilson was shot twice in the head and once in the body, leaving his wife and children without a husband and father

Alistair Wilson spent Sunday, November 28 2004, taking a stroll along the Scottish coast with his wife Veronica.

After returning to his home in Nairn, a seaside town in north-east Scotland, he had dinner and tucked his two young boys into bed.

But hours later a strange man came to the door asking to speak to the 30-year-old banker.

Mr Wilson was shot twice in the head and once in the body, leaving his wife and children without a husband and father.

Baffled police have have yet been unable to solve the murder but in December 2016 they revealed more about the gun that was use to kill Alistair.

A gun, identical to the 1920s Haenel Schmeisser that killed him, turned up at a local house clearance sale.

At the time a caller rang a radio station saying they know more information about the crime.

Haenel Schmeisser are rarely found in the UK, and there have only been 13 of them recovered there since 2008.

Police believe that soldiers may have brought the guns back to the UK following the Second World War. 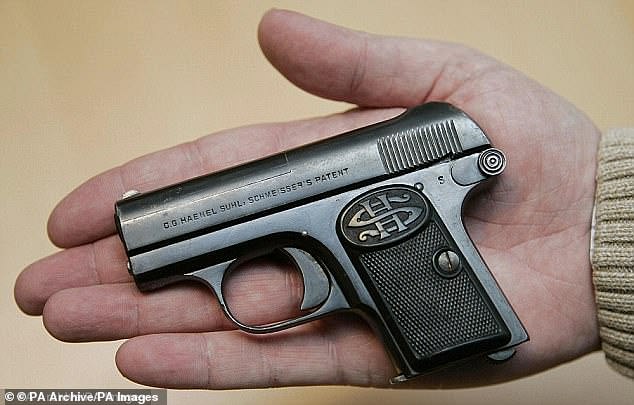 A gun, identical to the 1920s Haenel Schmeisser that killed Alistair (pictured), turned up at a local house clearance sale 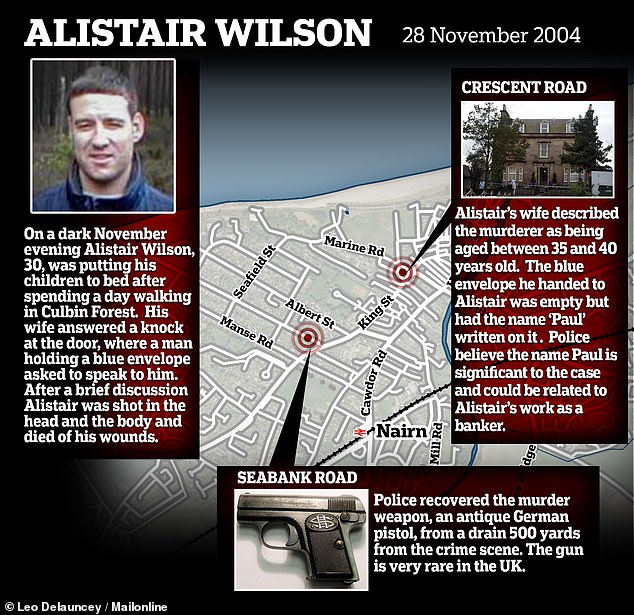 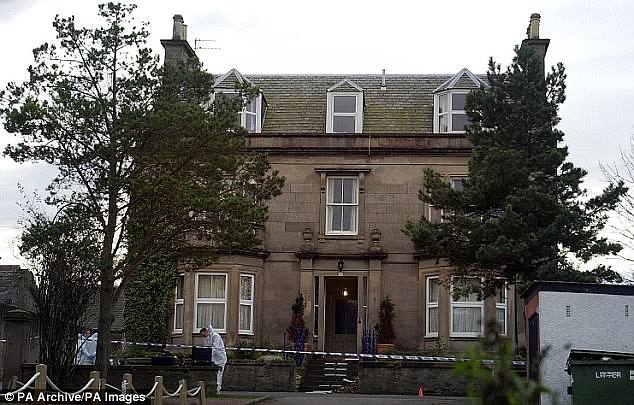 Baffled police have as yet been unable to solve the murder but in December 2016 they revealed more about the gun that was use to kill Alistair. Pictured, forensic police officers at Alistair’s home after his brutal murder

The murder of Suzy Lamplugh more than 35 years ago remains one of the most notorious unsolved cases in Britain. 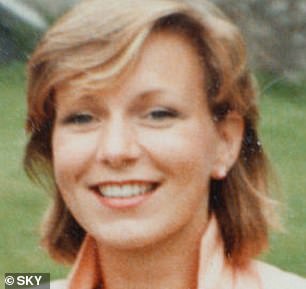 Suzy Lamplugh, 25, was murdered shortly after leaving her office

The estate agent, 25, disappeared after leaving her office in Fulham, west London, on July 28, 1986.

She had been making her way to meet a client who called himself ‘Mr Kipper’ at a house in the same area.

Ms Lamplugh was spotted by a witness arguing with a man in Shurrold Road before getting in a car with him.

Her car, a Ford Fiesta, was recovered later the same day around a mile from where she was last seen. She was declared dead, presumed murdered, eight years later in 1994. 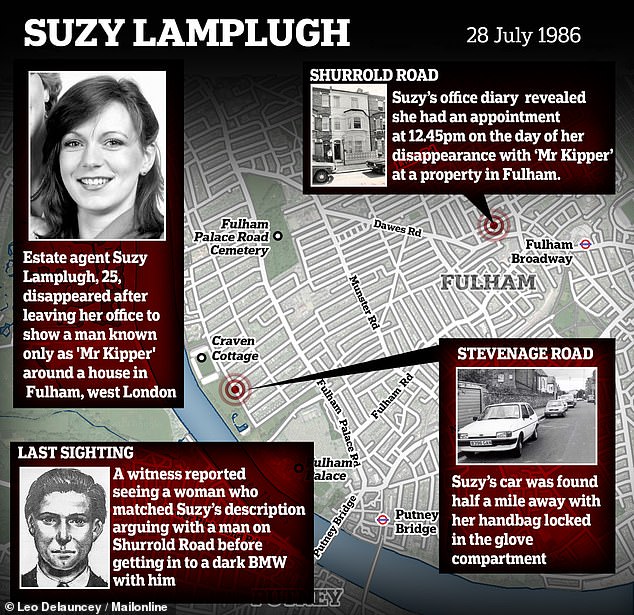 The only suspect in the case is John Cannan, 66, who is currently seving three life sentences after being convicted of murdering Shirley Banks in Bristol in 1987, the attempted kidnap of Julia Holman and the rape of an unnamed woman in Reading in 1986.

He was interviewed several times in connection with Ms Lamplugh’s death and remains a prime suspect.

Three days before she disappeared, Cannan was released from a hostel at Wormwood Scrubs prison in west London, where he had been serving a six-year sentence for rape.

The spotlight was shone on him again in October 2018 when police pulled up a patio at the former address of his mother Sheila in Sutton Coldfield.

The then owner of the property revealed that a police team spent six months searching the patio. No evidence was recovered.

Kevin Dundon, 22, vanished when travelling on a ferry from Belgium to the UK in October 1980, leading to fears he had fallen overboard.

He was last seen washing dishes in the galley of the Townsend Thoresen at around 6.30pm.

It was thought that Mr Dundon from Clacton-on-Sea, Essex, may have gone into the sea, but a search failed to find his body. 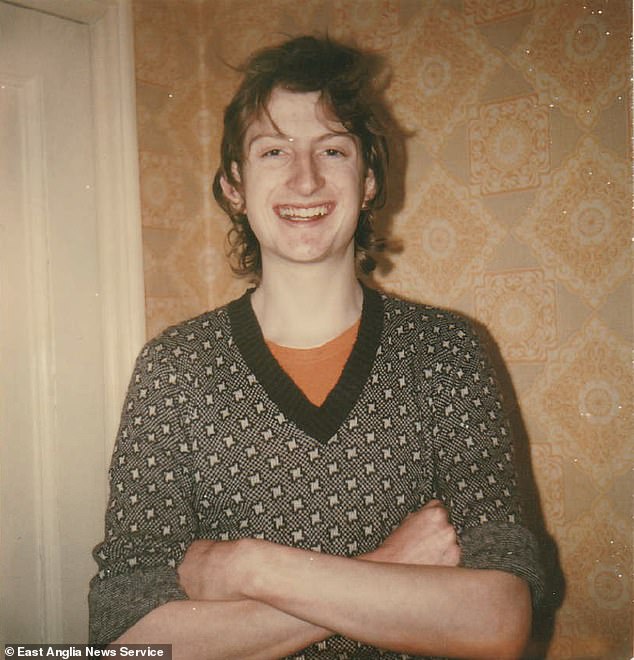 Kevin Dundon, 22 (pictured), went missing after he was seen washing dishes in the galley of the Townsend Thoresen ferry Viking Viscount on September 21, 1980

In 2020, police began investigating the case once again, interviewing dozens of people who thought Dundon had been murdered on board the ship.

His brothers have always believed he was a victim of foul play, though no murder suspect has ever been identified.

In a chilling detail, brother Tom Dundon told the BBC he had received a call from a priest who said he had spoken to a crew member from the boat just after the ship had docked.

He said: ‘The padre said to me that he couldn’t tell me what he said but don’t let it drop, bad things had happened on the boat.’ 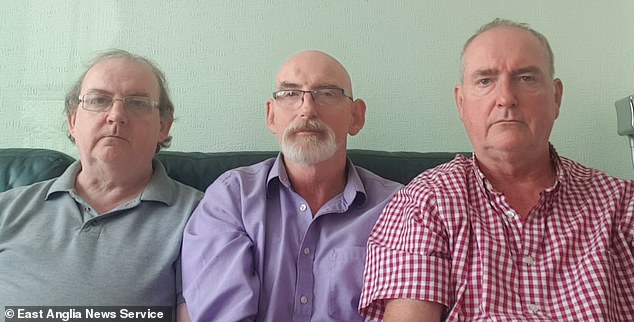 Kevin Dundon’s three brothers Jimmy, Tom and Danny Dundon (pictured) have always believed he was a victim of foul play. Pictured from left to right are Danny, 60, Jimmy, 65, and Tom, 63