British Airways pilots have been offered a lucrative new pay deal which could bring an end to industrial disputes at the airline, it emerged last night.

The bitter dispute brought huge disruption to passengers in September when 3,000 pilots went on strike, causing sweeping cancellations and £80million in lost revenue.

The action was staged by the militant British Airlines Pilots Association (Balpa) union after its members turned down an inflation-busting pay rise of 11.5 per cent over three years.

The lucrative increase which would have boosted the pay of some captains to £200,000.

BA had feared future strikes could be held over the busy Christmas period, in a year when it has already suffered serious reputational damage from IT failures and a major data breach.

But last night there were hopes the row could finally be resolved.

As part of a new agreement, BA has reportedly agreed to an inflation protection clause in its previous pay offer – as well as improvements to working conditions, rostering and flight bonuses.

The airline has also offered to reintroduce generous travel perks it took away from striking pilots – including 90 per cent discounts on any flight for them and their families.

BA pilots will vote on the new deal in the next few days, the Financial Times reported last night.

A spokesman for Balpa said: ‘We can confirm that Balpa, BA and ACAS [the arbitration service] have put together a new pay and conditions proposal and subject to final checks Balpa expects it will shortly be consulting its 4,000 BA members on them.’

If approved by the pilots, the new deal could bring an end to one of the most damaging periods in the airline’s 100-year history.

The industrial action came a year after hackers stole the personal data of half-a-million BA customers in a breach which led to a £183million fine. 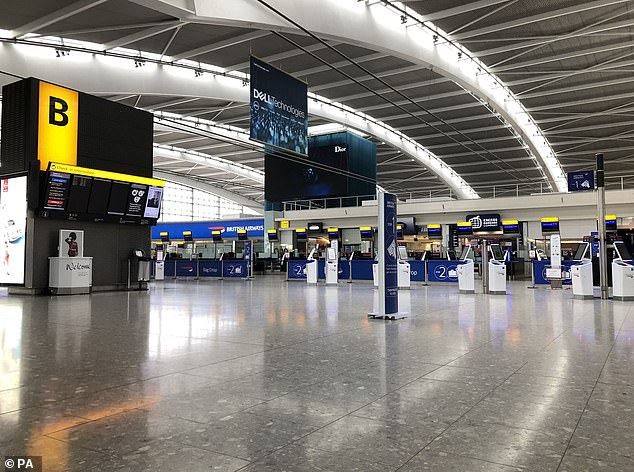 BALPA will recommend the proposed pay deal to its 4,000 British Airways members. The two-day walk out in September was the first time BA pilots had striked in the airline’s 100-year history. Tens of thousands of passengers were discommoded, with Heathrow Terminal Five, pictured, left like a ghost town

In July and August this year, glitches in BA computer systems caused the cancellation or delay of hundreds of flights, inflicting misery on tens of thousands of customers. There were similarly severe systems failures in 2017.

And earlier this week, another IT meltdown caused delays of up to 24 hours and a small number of cancelled flights.

But it is the strikes which have caused the worst damage to BA’s reputation.

Although no future strike dates had been set, Balpa general secretary Brian Strutton warned they were possible.

After cancelling a third strike in September, he said: ‘Someone has to take the initiative to sort out this dispute and with no sign of that from BA, the pilots have decided to take the responsible course.

‘In a genuine attempt at establishing a time out for common sense to prevail, we have lifted the threat of the strike on the 27th September.

‘BA passengers rightly expect BA and its pilots to resolve their issues without disruption and now is the time for cool heads and pragmatism to be brought to bear.

‘I hope BA and its owner IAG show as much responsibility as the pilots.’