The decision follows Virgin Holidays, which also scrapped ticket sales to attractions that keep whales and dolphins in captivity.

All attractions where wild animals are central to the attraction have been removed from its website, BA.com.

However, BA Holidays customers will still be able to book rooms in hotels where wild animals are kept on site.

But the company says that these will be clearly labelled as keeping wild animals so customers can make an informed choice when booking their holiday.

Claire Bentley, managing director of British Airways Holidays said: ‘Our customers tell us they have concerns about wild animals being kept in captivity, and increasingly see animal performances in particular as outdated.

‘We are delighted to have worked with Born Free to develop our new strategy which allows our customers to make more informed choices and we are contacting all our hotel and attraction partners about our new approach.’

The decision to scrap ticket sales to SeaWorld and other attractions that features wild animals follows an online petition that pleaded with BA Holidays to stop supporting SeaWorld.

It was set up by Kathleen Haase and Whale & Dolphin Conservation UK and attracted almost 300,000 signatures. 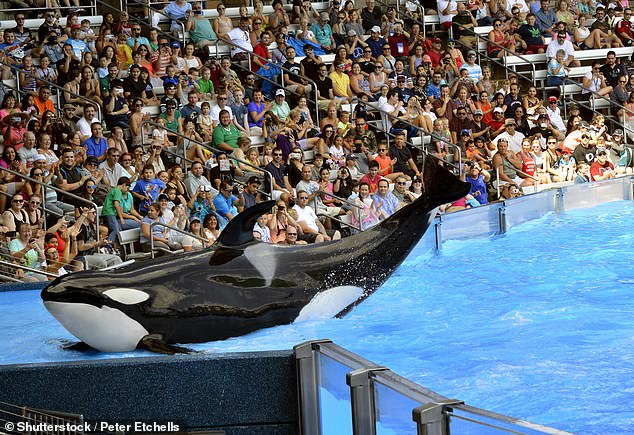 Last month when Virgin Holidays announced it would be scrapping ticket sales to the attractions, it said it wanted to encourage customers to admire animals in the wild from a distance instead.

Holiday companies have been under pressure to axe visits to places where orcas are kept in captivity after a public backlash in 2013 following the release of the documentary Blackfish.

The film argued that orcas held in captivity become more aggressive towards humans and each other.

After the release of the documentary, attendance at SeaWorld parks dipped, the company faced falling profits and Southwest Airlines ended its 25-year relationship with the theme park company.

In March 2017, SeaWorld’s CEO acknowledged that the public’s attitude had changed about keeping killer whales captive and that the company would end its orca breeding programme.