A British Army major has been fined £5,000 after a corporal suffered serious burns when he ran over burning coals in a ‘kangaroo court’ punishment.

Major David Landon told Corporal Nathan Black he had to either sing the regimental song or tackle a burning fire pit after being accused of losing his tank regiment’s mascot.

Cpl Black, 32, took the ‘absurd’ option of running across the fire pit, but stumbled and fell in, suffering such serious burns he had to be airlifted to hospital.

Landon, 39, an Afghanistan veteran, has now been fined £5,000 following what was supposed to be a ‘humourous’ event, a court martial heard.

The incident took place in January after Landon completed a week of live fire training in Latvia with the Queen’s Royal Hussar’s A Squadron.

The soldiers had been permitted to drink alcohol and build a fire pit during the celebrations, Bulford Military Court in Wiltshire heard.

‘[Following the speech] range targets were burnt in a fire pit. All the ranks attending were allowed to drink within the two can rule.

‘Major Landon was present throughout and he was the senior officer present.’

Bulford Military Court heard the evening had been ‘jovial and good humoured’ and for ‘unknown reasons’ Corporal Black had already voluntarily run across the pit twice before.

At some point during the night a ‘kangaroo court’ was convened by the soldiers to decide who was responsible for losing the squadron’s toy mascot.

Lt Col Hopkins continued: ‘Major Landon said, in jest, it’s either a fire run or a rendition of the regimental song.

‘Major Landon thought Corporal Black would opt for the song. Black contemplated his response. Several others were shouting for him to lose his eyebrows or moustache.

‘After a momentary pause he ran across but this time fell into the fire pit.’

The corporal was taken to hospital before being flown back to the UK where he was ‘incubated’ and sedated to deal with the pain from burns to his hands and thighs.

After the incident, father-of-one Major Landon – who was on secondment from the Royal Scots Dragoon Guards – claimed Corporal Black had simply ‘fallen into the pit’. 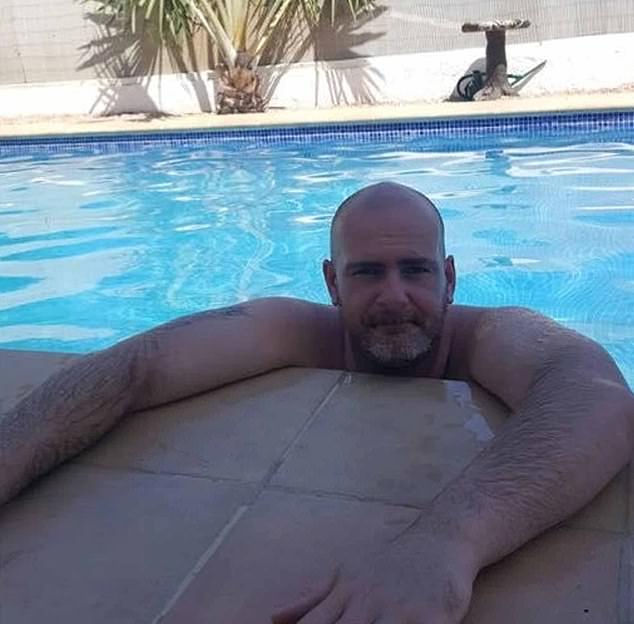 Cpl Black (pictured), 32, took the ‘absurd’ option of running across the fire pit, but stumbled and fell in, suffering such serious burns he had to be airlifted to hospital

However, after he learned of the severity of the soldier’s injuries he said he was ‘mortified’ and admitted that the soldier had actually been running across the flames when he stumbled and fell.

Mitigating, Mr Matthew Bolt, said: ‘[Major Landon] didn’t intend any harm to come to Corporal Black. What he said, he said in jest, in the belief he would not enter the fire.

‘His culpability lies in miscalculating the risks of those words…

‘His expectation was [Corporal Black] would sing the regimental song and appreciate the ‘absurdity’ of running across the fire.’

Sentencing, Assistant Judge Advocate General Alan Large said: ‘During the evening there was a form of a so-called kangaroo court.

‘It was held to determine, in a humorous way, who was responsible for various events during the exercise.

‘Major Landon told Corporal Black either to sing the song or run across the fire. We accept that as far as Landon is concerned that the latter was said in jest and he did not expect Corporal Black to do it.’

However, he said the Major, who has been in the armed forces for 15 years, was ‘unwise’ and should have been honest about the incident from the outset.

Major Landon, who admitted one charge of conduct prejudicial to good order and service discipline, was reprimanded and fined £5,000.