An expat British artist who is fighting for his life in hospital after falling from his mezzanine-level bed may have been having sex at the time, Italian police say.

Orlando Campbell, 30, who owned property in Deptford, South London, before moving to Sicily, was found unconscious in a pool of his own blood at his apartment in Palermo on Monday.

He was taken to hospital and is now in critical condition in a coma, while police have quizzed two American women, aged 22 and 35, who were in the apartment with him.

Orlando Campbell, 30, was found unconscious in a pool of blood on Monday after apparently falling from his mezzanine-level bed in an apartment in Palermo, Sicily

According to Giornale di Sicilia, the older woman was in bed with Campbell at the time, while the other was asleep on the lower level.

Police were called by the older woman around 5am on Monday and found Campbell with a head wound inside a first floor apartment in central Palermo.

Officers told The Scottish Sun that all three had been drinking before the incident and that both women are giving different accounts of what happened.

Police also told the newspaper that a sex romp gone wrong is a line of inquiry.

‘We’re working on the theory that he fell out of bed. But we need to know what he was doing. Maybe something got out of hand,’ a source told The Sun.

‘Everyone was drunk. They say they weren’t having sex, but who knows?

‘They say they can’t remember much other than finding him on the floor. But each woman is giving a different story. The wound is compatible with a fall. 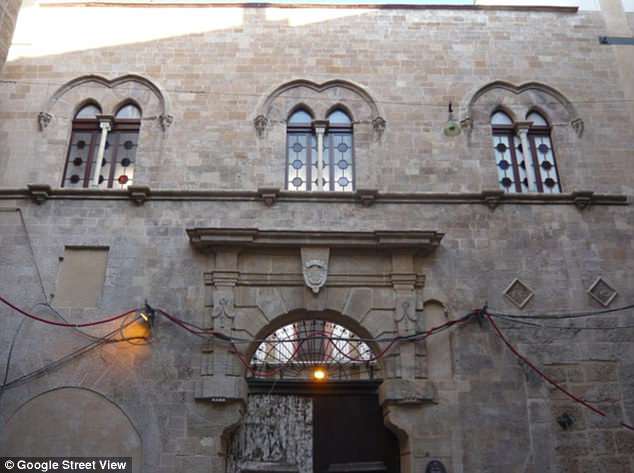 Campbell was found inside this apartment building alongside two American women, aged 22 and 35, who have been questioned by police amid suspicions of a sex romp gone wrong

‘One was with him at the time. The other was in a bed below.’

The older woman also had marks on her wrists that she claimed were cigarette burns, but later changed her story to say she cut herself while calling for help.

Assault is another line of police inquiry, Palermo Today reported, but police have not yet charged anybody with a crime. The two women were released after questioning.

Officers are waiting for Campbell to wake so they can question him, but unless he alleges a crime, the investigation will likely be dropped.

Police have ruled out a suicide attempt as none of the wounds appear to be self-inflicted, Repubblica reports.

Orlando knew the women before the night in question and had paid for their flights from Berlin so they could join him in Siciliy, according to The Sun.

He sold a £1million property in Deptford last year before travelling to Europe.

Family members have flown out to Italy to be with him and the Foreign Office have said they are supporting his relatives.