Bacon is currently produced using potentially-harmful nitrites during the curing process, which has been linked to bowel cancer.

But from the New Year onwards the new Naked Bacon will be available to millions in UK supermarkets, thanks to a technological breakthrough.

World Health Organisation officials warned in 2015 that just two rashers of bacon a day or half a burger increases the risk of cancer by a fifth.

Fom the New Year onwards the new Naked Bacon will be available to millions in UK supermarkets, thanks to a technological breakthrough

In a major announcement, the WHO said processed meat had the same cancer-causing threat level as cigarettes, asbestos and the deadly poison arsenic.

It pointed to research showing how eating just 50g of processed meat a day increases the risks of tumours of the bowel by 18 per cent.

This is equivalent to just one sausage, half a burger, two meatballs, or two slices of ham or bacon.

But from next month Naked Bacon, processed using natural fruit and spice extracts and produced by Northern Ireland food company Finnebrogue, will be sold across British supermarkets.

‘This is further evidence that the British food industry is going from strength to strength. 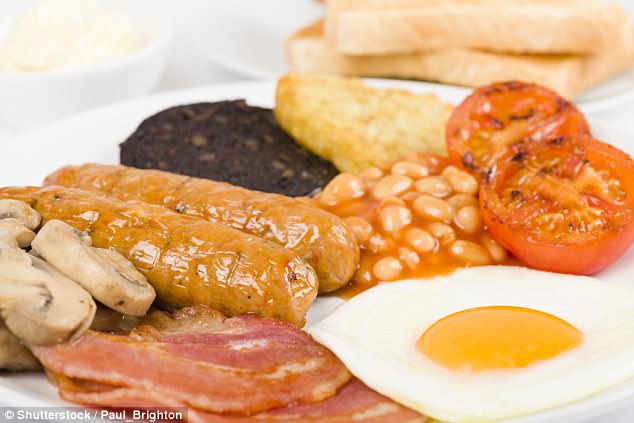 ‘UK firms like Finnebrogue are producing some of the best food anywhere in the world.’ Chris Elliott, chief of the Institute for Global Food Security, commented: ‘Nitro containing compounds, used in the manufacture of traditional bacons, are known to cause the formation of chemicals that have negative health impacts.

‘To have a bacon produced naturally, that doesn’t require such chemicals to be added or formed during processing, is a very welcome development.’ The bacon was tested by blindfolded punters, who were reportedly unable to spot the difference between a rasher cured with nitrite and the new Naked Bacon.

Denis Lynn, chairman of Finnebrogue, said: ‘The problem with bacon is dead simple.

‘Our Naked Bacon is not only safer than any other bacon on the market, it also tops the charts in blind taste tests.

‘This really is the biggest revolution to the British breakfast for a generation.’ This is the first time bacon free from nitrite will be sold to millions of people in supermarkets, after £13.5 million was spent over ten years developing the much-welcomed product.

In 2018 Finnebrogue will be able to produce 60 million rashers, costing about £3 for a pack of six bacon rashers.

Processed meat describes any red meat that has been cured, smoked or had preservatives added to increase its shelf-life.

Scientists believe that it is these chemicals – including sodium nitrates and nitrites – which trigger tumour growth.

The new bacon product will be available in Waitrose, Morrisons, Sainsburys and also in Booker in Northern Ireland.

Marks & Spencer will work with Finnebrogue to produce its own brand of the nitrite free bacon.