Chinese authorities forced a confession that the British started the Hong Kong protests by ‘torturing a consulate worker with stress positions, sleep deprivation and beatings’

Simon Cheng Man-Kit, 28, pictured, a Trade & Investment Officer in the Scottish Development and International Trade department in Hong Kong, has accused Chinese authorities of extracting a confession through torture

An employee of the British consulate in Hong Kong has accused Chinese authorities of torturing him while in custody.

Simon Cheng, a trade and investment officer for the consulate, has said that Chinese officials forced a statement from him when he was arrested returning to Hong Kong after a business trip to mainland China in August.

Officers allegedly forced a confession from him, which identified the British as catalysts of the Hong Kong anti-government protests.

Among the allegations, Mr Cheng claims that officers put him into stress positions and made him squat for hours at a time. They also beat him with a truncheon, he said.

His guards deprived him of sleep and forced him to sing the Chinese national anthem to ‘invigorate’ him. Mr Cheng was in Chinese custody for two weeks.

‘I felt very scared, I didn’t know if I would ever be let out,’ Mr Cheng told the Daily Telegraph.

‘They told me: There are no human rights in this place.’

Foreign Secretary Dominic Raab said that the foreign office was ‘shocked’ and ‘appalled’ at the ordeal Mr Cheng went through in the hands of the Chinese authorities. 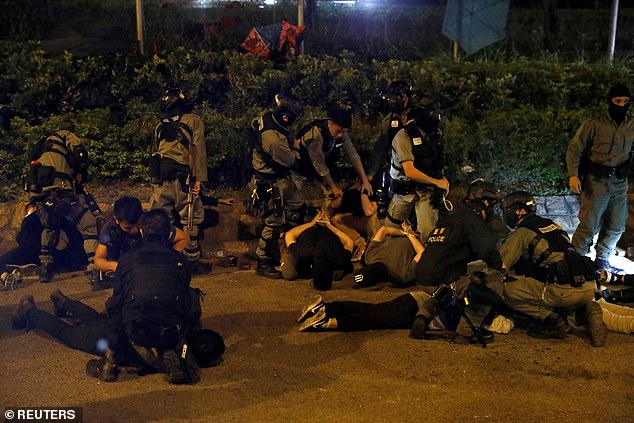 Detained protesters lay on the floor after they tried to leave Hong Kong Polytechnic University (PolyU) campus, in Hong Kong, China November 19, 2019. Mr Cheng said that officers put him in stress positions, deprived him of sleep and made him sing the Chinese national anthem among other methods of torture 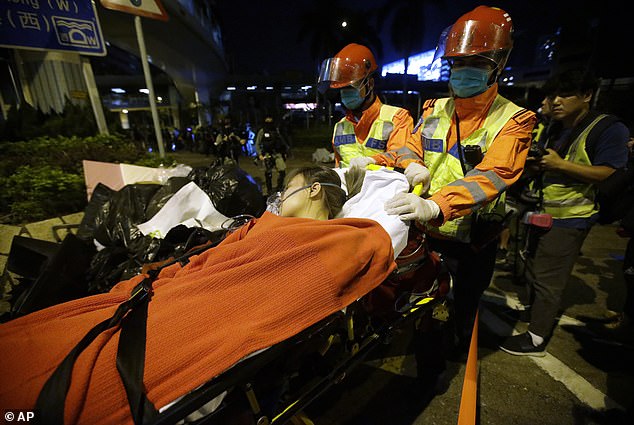 Medical workers transport an injured protester on a stretcher near Hong Kong Polytechnic University in Hong Kong, Tuesday, Nov. 19, 2019. Anti-government protests have raged in Hong Kong since June but the police response is becoming more brutal. Students under siege at a Hong Kong university tried to escape through the sewers today amid fears that police would storm the campus and open fire, causing a Tiananmen Square-style massacre

He added that diplomatic efforts were underway to ‘hold those responsible to account’.

Though Hong Kong protests have been raging since June, the police response has become more violent in recent weeks.

Students under siege at a Hong Kong university tried to escape through the sewers today amid fears that police would storm the campus and open fire, causing a Tiananmen Square-style massacre.

Dozens of activists at Hong Kong Polytechnic University wrapped their knees and arms in plastic on Tuesday as they prepared to try and crawl to freedom through a perilous maze of underground tunnels.

There are thought to be between 100 and 200 students left on campus, locked into the third day of a violent standoff with police who are trying to get inside and break up the pro-democracy demonstration.

Speaking Tuesday morning, city chief executive Carrie Lam said the only option for the remaining demonstrators was to lay down their weapons, surrender and face the legal consequences.