British grandfather, 64, falls 1,000ft to his death after horror motorbike crash in Nepal

British grandfather, 64, falls 1,000ft to his death after horror motorbike crash on mountain road in Nepal

A businessman has died in a motorbike crash after plunging nearly 1,000ft down a mountainside while on holiday in Nepal.

Iain Finnie, 64, was killed in Kathmandu while enjoying a ten day holiday with friends in the country.

The father-of-three, from Edinburgh, fell from the mountainside road while en route to the Mustang tourism district.

Iain Finnie, 64, from Edinburgh, died after his motorbike plunged nearly 1,000ft down a mountainside in Kathmandu, Nepal (file picture)

He was treated at Manipal Hospital in Pokhara but later died from his injuries. He is survived by a partner of 27 years.

The former Watsonian FC rugby player was well-known in sporting circles and had also been a member of Merchants of Edinburgh golf club for the past three years.

A friend who had known nursery director Mr Finnie for 60 years described the grandfather-of-three as a ‘very resilient guy’ and ‘an eternal optimist’.

President of the Watsonian FC rugby club, Euan Kennedy, was a school friend of Mr Finnie.

Mr Kennedy said: ‘We’ve been best pals for a long number of years. 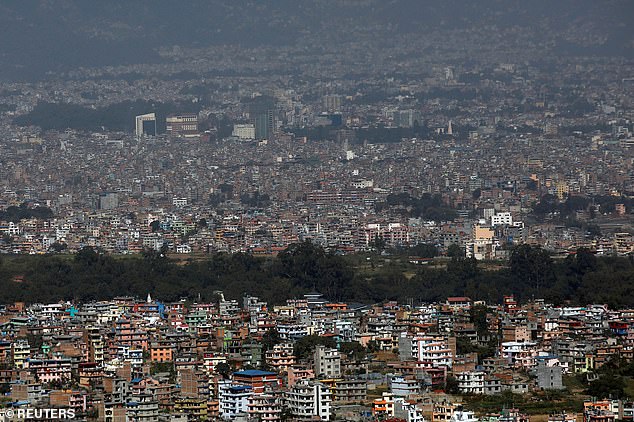 ‘For the past 29 years we’ve met every Thursday night for a couple of beers, along with a few other former pupils from George Watson’s College.

‘Iain was a great guy. He’s been through a few troubles throughout his life but always came out smiling. He was a very resilient guy, an eternal optimist.

‘He had the most positive attitude of anyone I’ve ever known, and that’s saying something.’

Mr Kennedy added that Mr Finnie had been ‘thoroughly enjoying’ his break in the Nepal.

He added: ‘I think everyone’s been left just shattered by the news. He was a larger-than-life character and was a very funny man.

‘We’re all still coming to terms with it even though it was days ago. I can’t rationalise it at all.

‘We’ll probably go for our regular Thursday night drink tomorrow and will just be expecting him to walk through the door, but he won’t.’

A spokesman for Watsonian rugby club said Mr Finnie was ‘a formidable seven-a-side player at hooker and had an impressive turn of speed with great handling skills.’

A spokesman from the Foreign and Commonwealth Office said: ‘We are assisting the family and friends of a British man who died in Nepal.’