By Natalia Penza For The Mailonline

A British tourist has died after plunging from a hotel balcony in Ibiza.

The 24-year-woman was declared dead at the scene of the incident, which occurred around 9am at the Rosamar Hotel near the party resort of San Antonio.

Her unnamed partner is understood to have been with her at the time. He reportedly told police she had fallen around 30 feet from a second-floor balcony.

Paramedics raced to the scene but could do nothing to save her.

A police investigation was underway on Sunday.

Rosamar Hotel is a four-star adults’ only hotel a short walk from the beach in Cala de Bou, in the west of the island and a short drive from San Antonio.

No-one from the hotel could be immediately reached for comment.

At the start of this month a 35-year-old British woman died after plunging from the sixth-floor of the Hotel Bellver in the Majorcan capital Palma.

Earlier in September, a55-year-old British tourist slipped and plunged nearly 400 feet off a cliff on the paradise Balearic island of Formentera.

Local reports said he was with his partner and a group of friends when the tragedy occurred.

Last month another British woman, a 48-year-old, died after plunging from an eighth-floor room at the four-star Hotel Melia Palma Marina which is also in the Majorcan capital.

This is a breaking news story. More to follow. 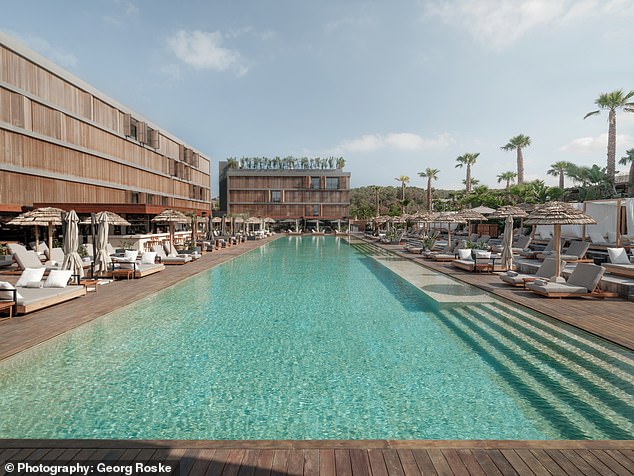 File photo: The party resort of San Antonio, close to where the incident took place, is pictured