A British trophy hunter has defended a couple who kissed for a photo while kneeling behind a lion they had just killed in South Africa.

Pictures of Darren and Carolyn Carter, from Edmonton in Alberta, Canada, posing after finishing a hunt sparked outrage among animal lovers and conservationists.

The majestic creatures have been considered vulnerable since 1996, and their population has decreased by 43 per cent in just 20 years.

But Carl Knight has claimed hunters should not need to explain themselves to ‘armchair conservationists’ who ‘know nothing about Africa’.

Mr Knight told the Express: ‘This is not [The Lion King’s] Mufasa or Cecil [the lion killed in 2015 that attracted international media attention], this is an animal that was farmed like a cow, a sheep or a crocodile hat is farmed for meat and skin.’

Pictures of Darren and Carolyn Carter, from Edmonton in Alberta, Canada, kissing while kneeling behind a lion they had just killed in South Africa sparked outrage among animal lovers and conservationists 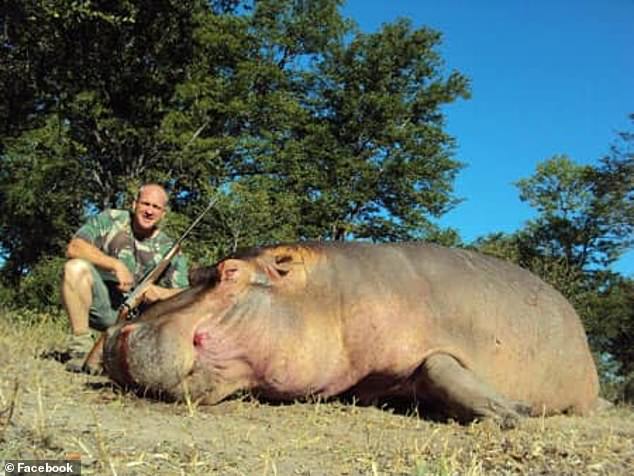 But British hunter Carl Knight (pictured), who lives in South Africa, has argued that the backlash has come from ‘armchair conservationists’ who ‘know nothing about Africa’

Tourists can pay to take selfies with lion cubs or walk with younger animals before they are moved to ‘canned hunting’ facilities where they cannot escape.

Hunters than pay to kill them in these facilities, which is far easier than tracking the animals in the wild.

Speaking of the practice on its website, Born Free said: ‘The animals involved are habituated to people from an early age, often through being hand-reared and bottle-fed, so they are no longer naturally fearful of people, making them easy targets for a rifle or bow when it comes to the hunt.

‘The international community has called on South Africa to shut down its canned hunting and commercial predator breeding industry, many hunting organisations condemn the practice, and even the South African government recognises that the industry makes no contribution to wildlife conservation and is entirely profit-driven.’

Mr Knight runs his own hunting business, Take Aim Safaris, which he claims has been unaffected by negative media attention in recent years.

He told the Express: ‘The money these clients paid for this lion is much needed in poverty-stricken Southern Africa.’

Mr and Mrs Carter were taking part in a tour organised by Legelela Safaris when they shot and killed at least two lions. 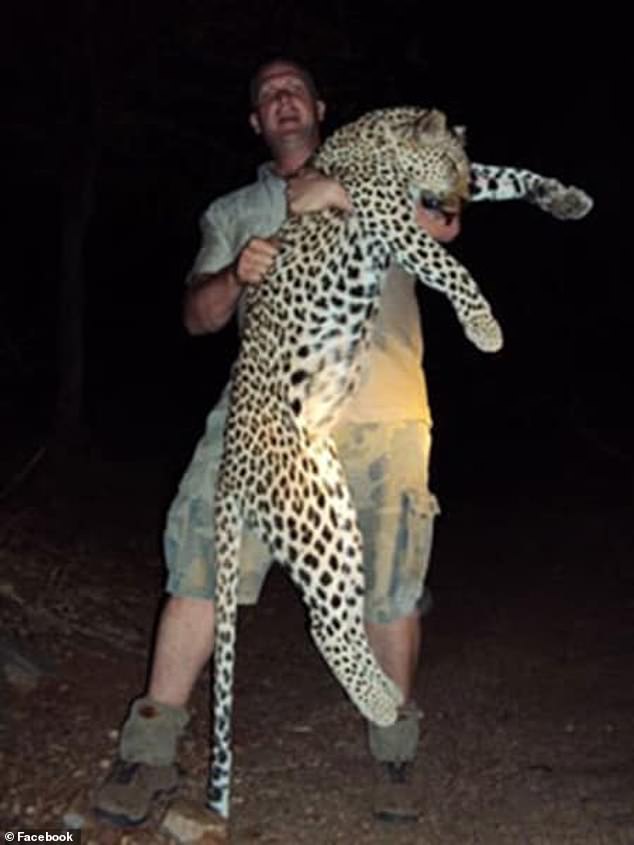 He claimed ‘this is an animal that was farmed like a cow, a sheep or a crocodile hat is farmed for meat and skin’ – a practice wildlife charity Born Free has condemned

The tour operator regularly shares snaps of dead animals alongside proud hunters, often grinning as they hold up their guns, on their Facebook page.

Underneath the kissing photo, they wrote: ‘Hard work in the hot Kalahari sun…well done. A monster lion.’

Other photos show the same couple in front of another dead lion, captioned: ‘There is nothing like hunting the king of the jungle in the sands of the Kalahari.

‘Well done to the happy huntress and the team…’

The pair, who run a taxidermy business, have described themselves as ‘passionate conservationists’ despite taking part in hunts, reports the Mirror.

Eduardo Goncalves, the founder of the Campaign to Ban Trophy Hunting, believes the lions were captive and bred for the sole purpose of being killed by hunters.

He added: ‘This couple should be utterly ashamed of themselves, not showing off and snogging for the cameras.’

The news comes after Environment Secretary Michael Gove said he wants to ban big-game hunters bringing back trophies from their kills.