British man is arrested after Irish tourist is stabbed to death ‘in surprise attack’ at Costa del Sol pub ‘after the Briton had been pestering women in the pub, including victim’s partner’

By Gerard Couzens In Spain For Mailonline

A British man has been arrested in Spain over the murder of an Irish tourist at a Costa del Sol pub in the early hours of this morning.

Detectives say the victim was killed after being knifed with a broken bottle in the mens’ toilets at an unnamed Irish pub in the holiday resort of Fuengirola.

The incident has been described as a surprise attack which occurred after the British man started pestering several women in the pub, including the partner of the man who was killed.

The suspected killer is 49 and the dead man is 53, according to police.

After the attack the alleged killer was said to have tried to flee the scene but was stopped by door staff at the pub.

A spokesman for Spain’s National Police confirmed the two men did not know each other and the suspect had taken ‘interest in several women inside the pub’, including the partner of the victim.

He said: ‘National Police officers have arrested a 49-year-old British man in Malaga in the early hours of this morning over his suspected involvement in the death of an Irishman aged 53 at a pub in the town.

‘The victim received cuts to his neck and other parts of his body with a broken beer bottle.

‘The incident occurred around 1.50am in the toilets of the Irish pub. Police have established from inquiries that the victim and attacker didn’t know each other.

‘According to initial inquiries, the suspect took an interest in several women inside the pub, including the partner of the victim. 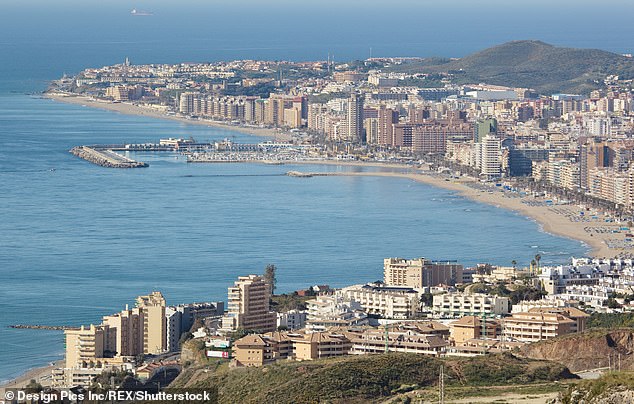 ‘At one point the man who was killed spoke to the suspect. The victim was allegedly attacked by surprise in the mens’ toilets.

‘The arrested man, who allegedly had two broken bottles in each hand, is suspected of inflicting several wounds on his victim, including some to the neck.

‘He tried to flee the scene afterwards but was stopped from doing so by security staff and subsequently arrested by police in the area.

‘Medical responders could do nothing to save the victim, who died at the scene.

‘The British man has been arrested on suspicion of murder and is currently being held at Fuengirola police station.’