A British stag-do reveller has become the first person ever to swim across the iconic Hoover Dam.

Arron Hughes was fined by police after swimming across the perilous stretch of water on the border of Arizona and Nevada.

And the 28-year-old forklift truck driver from Ruthin in North Wales says the only reason he was not arrested is because he was the only person to ‘make it across alive’.

It stretches across the Black Canyon on the Colorado River, near Las Vegas.

Mr Hughes is thought to have escaped with his life because nine of the ten hydroelectric turbines were switched off.

Mr Hughes told Mail Online: ‘It was all down to having enough beer at the time. Ten of us were on a stag do and it was my first time in Vegas.

‘We hadn’t stopped drinking all week and I just wanted to make the most of it.

‘We decided to go and see the Hoover Dam and on the way there, me and my friend were sat in the back of the pick-up. It was like an oven – it was roasting.

‘After a few days of drinking I decided I was going to go for a swim. The plan was to have a dip then jump out but in the end I though you only live once – I may as well go for it. 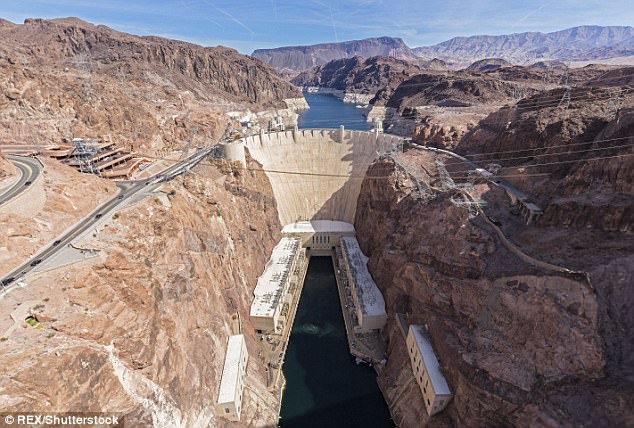 ‘The water pushes you towards the wall so you’ve got to swim quite hard. It took about half an hour and you can’t stop.

‘The police were shocked. They were totally fine and just said we can’t believe it.

‘One officer said “in my whole lifetime I’ve never seen or heard of anyone doing it.”

‘I didn’t realise it was an offence. There are no signs saying no swimming – you’re just expected not to.’

Mr Hughes was led away in handcuffs before being fined £250 – but escaped jail because he was ‘the only person who had ever achieved it’.