Tragic: Leah Cambridge, 29, passed away after a cosmetic operation to lift her bottom

A mother-of-three had spoken about getting a Brazillian bottom lift ‘for some time’ before she died of complications from the surgery, a coroner heard today.

Leah Cambridge, 29, from Leeds, is believed to have suffered three heart attacks after the operation which involved injecting fat into muscles in her bottom.

But she went for the operation ‘very much on her own volition’, a coroner at Wakefield Coroners Court was told.

Ms Cambridge is said to have arranged to have the surgery in Turkey through a firm named Elite Aftercare, which acts as a go-between linking clients and surgeons.

During a pre-inquest review hearing on Tuesday, Ms Cambridge’s partner, Scott Franks, 31, revealed how she had been interested in having the procedure with the ‘highest death rate of any cosmetic surgery’ for some time.

He said: ‘She spoke with me regarding it on several occasions, and it was obvious that she was quite interested in doing it for some time.

‘Obviously she’s booked it and just gone, and that’s it, she’s gone.’

Mr Franks also said his partner was told that she would need to put on 7kg prior to having the work done.

The £5,000 surgery, which involves having fat extracted from the waist and injected into the buttocks, was carried out by a surgeon who had ‘no legal relationship’ to Elite Aftercare, Wakefield Coroners Court heard.

Speaking about Ms Cambridge Richard Paige, who is representing the family at the inquest, explained: ‘This was very much done on her own volition.’

The court had previously been told how she travelled to Izmir in August last year to have the ‘butt lift’, but died following complications in the procedure. 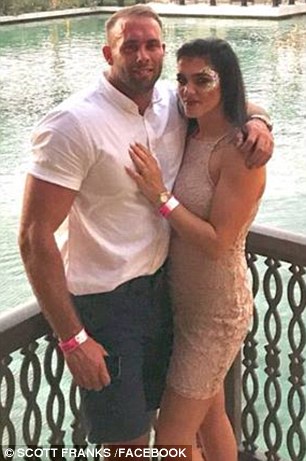 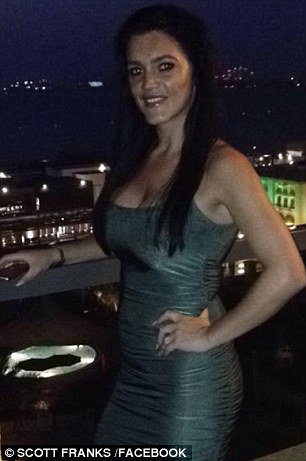 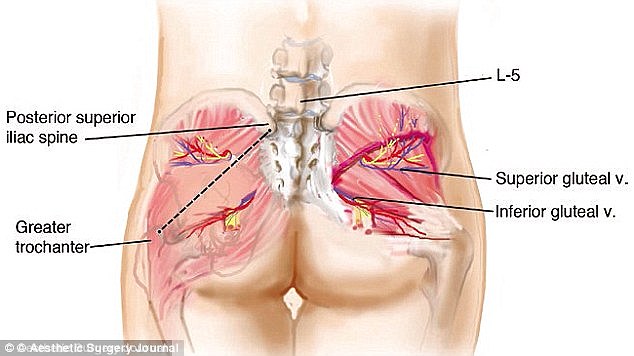 When plastic surgeons inject transferred fat into the muscles of the butt, there is a high risk that a glob of the fat will get into the inferior or superior gluteal veins and travel to the lungs

Mr Paige also quoted a report from the British Association of Aesthetic Plastic Surgeons (Baaps) which suggests that the ‘Brazilian buttock lift’ has the highest death rate, believed to be as high as one in every 3,000 operations, of all cosmetic surgery procedures.

The report, issued in October last year, suggests that surgeons refrain from performing the treatment until more data can be obtained, due to ‘the risk of injecting fat into large veins that can travel to the heart or brain and cause severe illness and death’.

It said: ‘Surgeons warn the Brazilian buttock lift has the highest death rate of all cosmetic surgery procedures, due to the risk of injecting fat into large veins that can travel to the heart or brain and cause severe illness and death.’

Sarah Hemingway, representing Elite Aftercare at the inquest, told how the firm does not directly employ the surgeons themselves, and has no formal contract with the hospital involved in the surgery.

She said the company is ‘like a travel agent’ that acts as a middle man between client and surgeon and also provides a luxury villa for the patient to stay in post surgery.

She added: ‘The surgeons aren’t in employment with Elite Aftercare.

‘Elite Aftercare facilitate the introduction of clients to the surgeons who operate.’

But Mr Paige explained how the company’s website claims to employ ‘the best surgeons and nurses’ for procedures.

The inquest also heard how Ms Cambridge had been asked to fill in a ‘patient information anaesthesia form’ prior to travelling for the surgery, but no direct contact was made between Elite Aftercare and her GP. 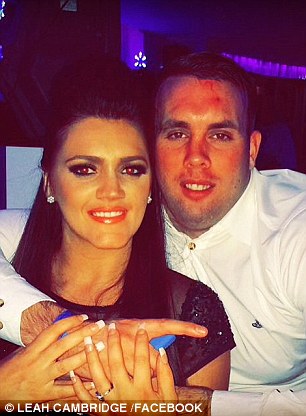 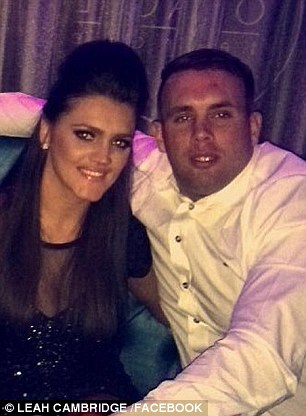 Mr Franks, pictured with Miss Cambridge, issued an impassioned plea for more information around the circumstances of her death

A provisional post-mortem examination revealed that the mother died from a fat embolism caused by a cosmetic surgical procedure.

Mr Franks said the beautician was paranoid about having excess stomach weight from having children, and opted for the butt lift procedure, which involves the reshaping of the buttocks by transferring fat from other areas including the stomach and back.

Reports in the aftermath of her death told how Ms Cambridge had three heart attacks during the operation, which took place on August 27 last year.

During Tuesday’s hearing, the coroner suggested that a three-day inquest into her death would take place in early July, focusing on the contact between Ms Cambridge and Elite Aftercare, any pre-assessments done prior to the treatment, and the procedure itself.

It is thought she died on the operating table at the Elite Aftercare Clinic in Izmir, favoured by the cast of The Only Way Is Essex.

Mr Franks said: ‘Leah was paranoid that she had excess weight from having three kids round her stomach.

‘I told her she was beautiful how she was but she really wanted it for her own confidence.’

Mr Franks believes Leah’s operation went wrong after fat was deposited into her blood stream and her oxygen levels dropped.

She fell ill shortly after undergoing the the surgery at the Elite Aftercare clinic on the morning of August 27, Mr Franks confirmed last year.

Fat entered her blood stream and her oxygen levels dropped, leading to three heart attacks and a fat embolism, which caused her death at 1.30pm, he said.

He says she was brought back to stable but she then had three heart attacks.

The clinic said in September ‘preliminary investigations have not raised any concerns over surgical competence or standards of care’ – and so it remained open.

It said the death had caused ‘a great deal of thought, reflection and consideration’ and it was ‘taking all reasonable steps to protect and reassure our clients’.

It then declared itself ‘open for business’.

Ex on the Beach stars Zahida Allen and Kayleigh Morris, Laytesha Grace, who appeared on MTV show The Valleys, and Geordie Shore and Celebrity Big Brother contestant Marnie Simpson, also had operations at the clinic.

Jemma Lucy, who has appeared on Ex on the Beach and Celebrity Big Brother, revealed she had a Brazilian butt-lift there this year.

She wrote on Instagram: Thankyou so much to @elitecosmeticsurgery !! The only place in the world where I would get surgery and enhance myself..’

In a heart-breaking tribute after her death Mr Franks wrote on Facebook: ‘I can’t believe I’m setting off to say my goodbyes to my little darling.

‘This is going to be the hardest thing I’ve done. I can’t imagine being in the house without her.’

To Miss Cambridge, he added: ‘I will always leave a space for you at the table and make sure our kids remember you.’ 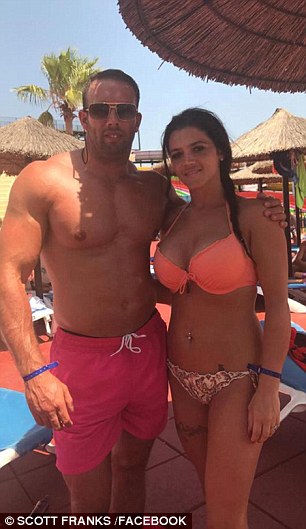 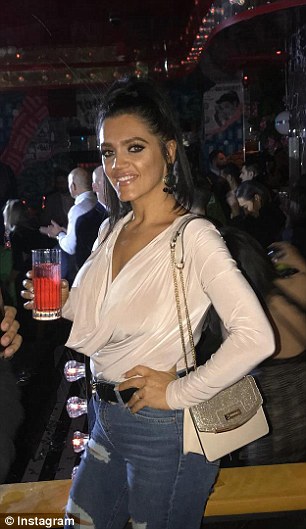 Miss Cambridge’s partner Scott Franks, pictured together, left, has described his devastation at her loss. The mother of three (right) is thought to have suffered complications very soon after the procedure

He wrote: ‘I’ve read every message that comes through and am very grateful, all I wana do is write about my baby cos then I get loads of notifications which I then read and take my mind away for them few minutes, I am absolutely heartbroken still doesn’t feel real.

‘I’m hoping she’s at home when I walk through that door and I’ve had an awful nightmare you wa my little darling and always will be.’

It has surged in popularity in recent years as women look to emulate curvy-bottomed celebrities such as Kim Kardashian, Nicki Minaj and Chloe Khan.

They have called for plastic surgeons to reevaluate their techniques ‘urgently’ as they clamour to identify why it carries such a high risk.

In a ‘shocking’ report, the taskforce said: ‘The death rate of approximately one in 3,000 is the highest rate for any aesthetic procedure.

‘Every surgeon performing Brazilian butt lifts should immediately reevaluate his or her technique.’

The taskforce, which represents the American Society of Plastic Surgeons among others, said the deaths were presumed to be from tears in the large gluteal veins allowing fat to block major arteries.

But autopsies of some patients who have died have also suggested surgeons have injected fat deeper than they intended to.

It added patients who want a super-sized behind should have the procedure carried out in stages, rather than all at once.

Clinics have reported the procedure has seen more than a 50 per cent increase compared to five years ago.

The procedure’s now widely-used nickname was coined in 1996 after Dr Leonard Grossman was filmed performing fat transfer surgery on a patient from Brazil.

British glamour model Chloe Khan, who shot to fame in 2010 following an unsuccessful audition for talent contest The X Factor, told Closer magazine last year how she was unable to sit down for six weeks after having a Brazilian butt lift.